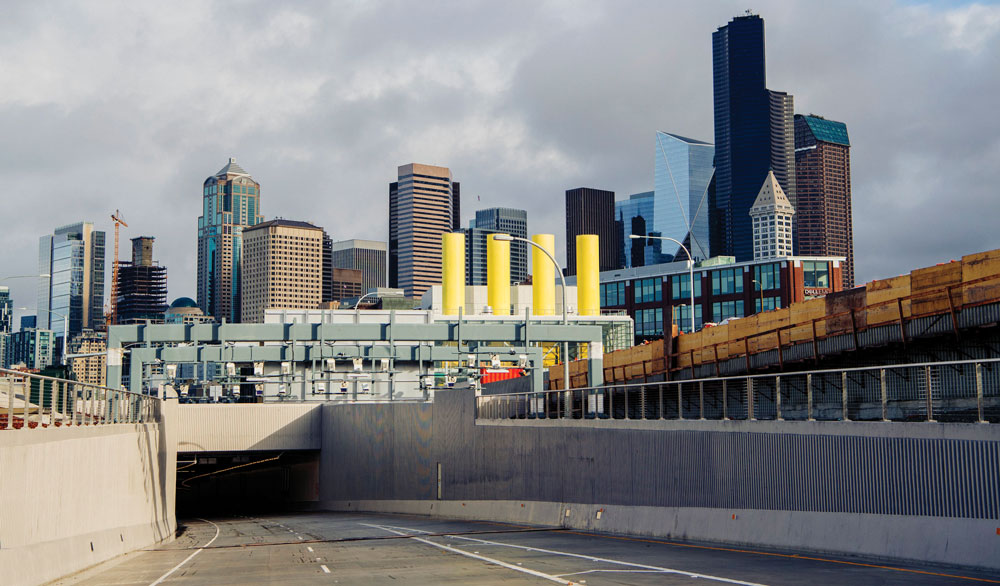 The new SR 99 tunnel is set to open to traffic in February. (Photo: HNTB)

Jan. 11 marked the end of an era – and the beginning of a new one – in Seattle with the closing of the Alaskan Way Viaduct, the elevated highway that is being replaced with a tunnel. Crews are now in the process of finishing connections to the new tunnel, which was expected to last about three weeks. After the tunnel is open to traffic, the viaduct will be demolished to make room for a new surface street along the waterfront.

The viaduct had served the city for more than 50 years, with final completion occurring in 1959. The structure was damaged by the Nisqually earthquake in 2001, requiring planners to repair or replace the aging highway.

The large-bore tunnel option was approved in 2009, and after well publicized trials and tribulations, the record-setting 57.5-ft diameter TBM (“Bertha”) completed its 9.270-ft journey in April 2017. The project reached substantial completion in October 2018.

“By opening the tunnel and removing the viaduct, we’re setting the stage for a historic transformation in our state’s largest city and throughout the region,” said Gov. Jay Inslee in a news release. “The end of the viaduct marks the beginning of an exciting new era in our state’s transportation history.”

In this issue we take a look back at the project with a special photo section. The images were captured by Catherine Bassetti, who was hired by the contractor, Seattle Tunnel Partners (Dragados-Tutor Perini JV), to document the project.

TBM is delivered absolutely free to tunnel industry members, and has been since we launched the magazine more than 20 years ago. Having an up-to-date subscription list is one factor that helps keep TBM free-of-charge. So, you can help us help you by updating your subscription on an annual basis. Need reasons? Here are five:

It is simple to renew your subscription to TBM. Just visit tunnelingonline.com/renewal and enter the information from your mailing label.