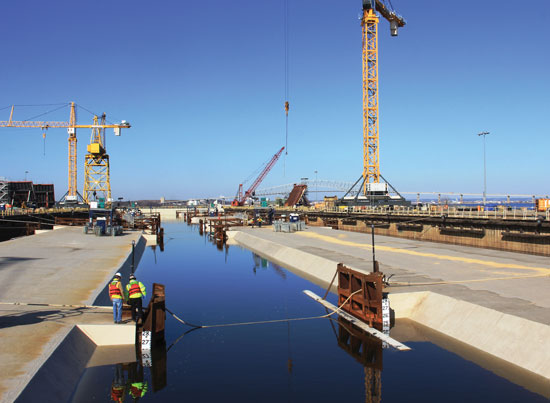 The Elizabeth River Tunnels (ERT) project has been a top transportation infrastructure priority for the Hampton Roads region of Virginia for many years. The Elizabeth River separates the adjacent cities of Portsmouth and Norfolk in a region of more than 1.7 million people that’s home to the world’s largest naval base and several marine terminals.

The existing two-lane, bi-directional Midtown Tunnel is a 50-year-old facility handling a million vehicles a month. It is the most heavily traveled two-lane road east of the Mississippi River and a vital link between Portsmouth and Norfolk. Since the existing tunnel was built in 1962, the region’s population has increased nearly 70 percent and tunnel usage had gone up by nearly 600 percent. Additional capacity is greatly needed to better manage traffic flow and reduce congestion.

A second Midtown Tunnel, in addition to other infrastructure improvements including an extension of the MLK Freeway, is critical for motorists, the region’s military installations and economy, the efficient movement of goods and services, and the quality of life in Hampton Roads. 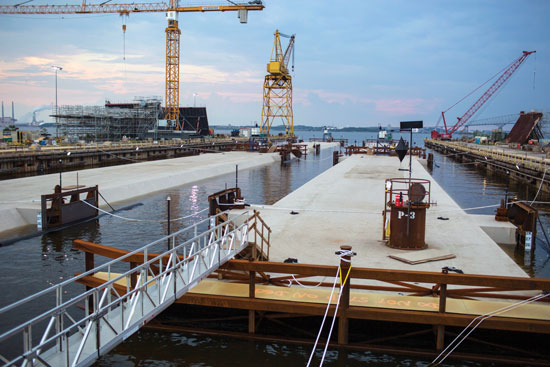 A $2.1 billion public-private partnership (P3), the ERT project is one of the largest P3 projects in the United States and the first P3 tunnel project. The ERT mega-project involves the development, finance, design-build, and operation and maintenance of four regional transportation infrastructure assets: 1) a new two-lane tunnel adjacent to the existing Midtown Tunnel (under the Elizabeth River between the cities of Portsmouth and Norfolk); 2) life-safety and maintenance improvements to the existing two Downtown Tunnels; 3) life-safety and maintenance improvements to the existing Midtown Tunnel; and 4) extending the MLK Freeway in Portsmouth from London Boulevard to I-264, which will provide a direct high-speed connection between U.S. 58 and the Midtown Tunnel and I-264 and the Downtown Tunnel.

Under a comprehensive agreement, the Virginia Department of Transportation (VDOT) will maintain ownership of the infrastructure and oversee the activities of Elizabeth River Crossings OpCo LLC (ERC); ERC will finance, operate and maintain the facilities for a 58-year concession period; and SKW Constructors (a joint venture of Skanska USA Civil Southeast Inc., Kiewit Construction Infrastructure Co., and Weeks Marine Inc.) will design and build the new Midtown Tunnel and the associated project assets. WSP/Parsons Brinckerhoff and Volkert Inc. served as the project’s designers. 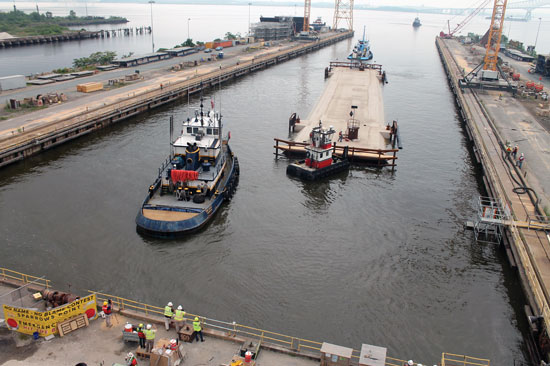 The various aspects of the Elizabeth River Tunnels Project are to be completed as follows:

The Elizabeth River Tunnels project will offer broad and lasting benefits to the Hampton Roads transportation system, its economy, and the lives of those who live and work in the region every day.

Benefits offered by the project include:

When the project is fully completed, the average round-trip commuter will save about 30 minutes a day – saving time and fuel and reducing emissions.

Roadway safety will improve with the elimination of bi-directional traffic in the existing Midtown Tunnel.

Through increased funding as part of the project agreement, Hampton Roads Transit will improve route frequency between Portsmouth and Norfolk. This enhancement could spur public transportation use, offering a low-cost alternative to driving alone.

The improvements will provide a critical link to the various port facilities in the region – supporting the movement of goods in and out of these facilities.

The project offers regional economic development benefits estimated at between $170 million and $254 million.
More than $1 billion of construction works will be built by local companies. More than 500 direct jobs and more than 1,000 indirect jobs will be created through local suppliers and vendors. 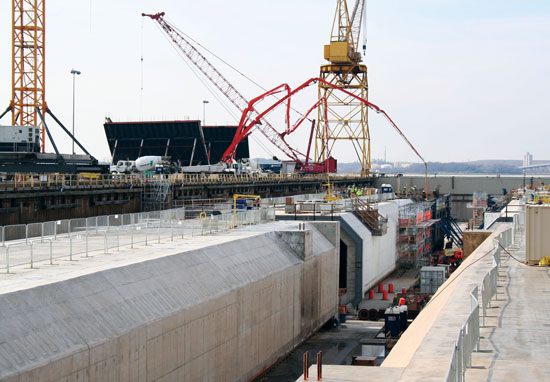 The centerpiece of the ERT project is a 3,800 ft-long underwater vehicular tunnel. Although the majority of the immersed tube tunnels constructed in the United States have been steel shell concrete tunnels, like the existing Midtown and Downtown tunnels, concrete tunnel elements were fabricated for this project, both for their cost savings and flexibility of design.

Tunnel fabrication involved the construction of 11 rectangular, reinforced concrete tunnel elements, with temporary bulkheads installed on each end so the tunnel elements would float. The elements were fabricated at a dry dock facility in Sparrows Point, Maryland, and then towed 220 nautical miles down the Chesapeake Bay to the project job site in Portsmouth, where they were safely moored and prepared for immersion.

Float out of the 11 tunnel elements was completed in two phases: Spring 2014 and Spring 2015. Once delivered to the project site in Portsmouth, tunnel elements were outfitted at the Port of Virginia’s Portsmouth Marine Terminal.
Prior to placement of the elements in the Elizabeth River, trenches were excavated on land and at the bottom of the river. The excavation removed 1.5 million cu yd of sediment, with approximately 10% being disposed of at an upland facility and 90% approved for ocean placement. For the land excavation, existing abandoned timber piles and shoreline debris were removed and a steel supportive excavation system installed. Ground within the system was removed to make way for the new tunnel.

The trench at the bottom of the river (95 ft below the surface of the river at its deepest point) is 55 ft wide and was filled with a minimum of 2 ft of gravel leveled to the proper grade using a screed barge. To complete the screed foundation for one immersed tube required three set ups. Placing the tunnel elements was performed using a lay barge – a special catamaran barge with placing girders spanning the opening between the barge hulls. The lay barge was capable of receiving, supporting, ballasting, and lowering the negatively buoyant elements to the bottom of the river.

Removable survey towers, mounted on the outboard end of each element, combined with GPS technology, were used to control the horizontal and vertical placement of each element during immersion. Each tunnel element has a thick rubber seal attached to its inboard end. It was compressed against a steel plate on the outboard end of the receiving element – and when water was pumped out of the joint chamber between the concrete bulkheads, it created a watertight seal between the new and previously placed elements.

Each of the 11 tunnel elements was placed sequentially on the bottom of the Elizabeth River, beginning in October 2014 on the Portsmouth side and moving toward the Norfolk side. Elements were placed at a rate of about one per month, with the placement of the last element occurring in July 2015 on the Norfolk side.

Backfill of the installed immersed tunnel required three distinct backfill operations. Immediately after an element was immersed, the locking backfill was placed first to prevent any horizontal movement of the element. The tunnel elements were then covered with ordinary backfill, designed to provide a protective cover over the tunnel. The final layer of backfill consisted of armor stone, placed to protect the tunnel from scour and from dragging ship anchors or other possible marine impacts. 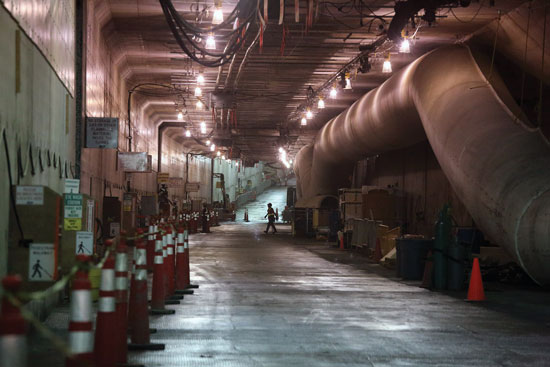 A design-build construction project of the scale and scope of the ERT project has a great deal of inherent risk – ranging from employee and subcontractor health and safety, to environmental stewardship and sustainability; from construction schedule and cost management, to stakeholder engagement and satisfaction. Managing and mitigating these risks, and building the foundation for a successful project, involved the deployment of several “keys to success,”

Virginia’s legislature passed the Public-Private Transportation Act in 1995 to allow for P3 projects. Overall, 33 states and one territory in the U.S. have enacted statutes that enable the use of P3 approaches for the development of various transportation infrastructures.

Under a P3, the private sector assumes more responsibility for a project’s risks, outcomes, and financial health: This provides a fixed price, specific timelines and deadline for delivery, and guaranteed operations and performance-based maintenance contracts.

It also allows for more efficient procurement than the traditional design-bid-build process. The pace of P3 procurement is accelerated, and it simultaneously provides the opportunity for design innovation, as well as the ability for local governments to provide its residents with needed infrastructure which may otherwise take years to fund and/or get off the ground. And because of the strict timeline of a P3 project, the private sector must meet the agreed upon deadline or pay high penalties for late completion.

Life-cycle maintenance decisions are included within the P3 contract. They are locked in for the long-term, and regular maintenance is now guaranteed and unaffected by future budget changes. The assets also remain in the ownership of the state – they are not privatized.

P3s are also all about fixed schedules and fixed pricing. This means you know what you’re getting right up front without the possibility of adding more fees to any project. Since the same party that constructs the project is responsible for its long-term operation and maintenance, this creates a system that is easier to sustain with more efficient management.

Skanska is very bullish on P3s in the U.S. market. As a world leader in the procurement of P3s globally, Skanska has more than 24 transportation and social infrastructure P3 projects – including toll roads, hospitals, schools, water treatment and hydro-power plants, and prisons. The Elizabeth River Tunnels P3 project really represents just the beginning of Skanska’s efforts in the U.S.

Information for this article was provided by Skanska, based largely on an interview with Wade Watson, Vice President of Operations, Skanska USA Civil Southeast Inc., and Project Director, SKW Constructors JV.