You are at:Home»News»International News»Pavement Surface an Important Consideration in Korea’s Long Tunnels 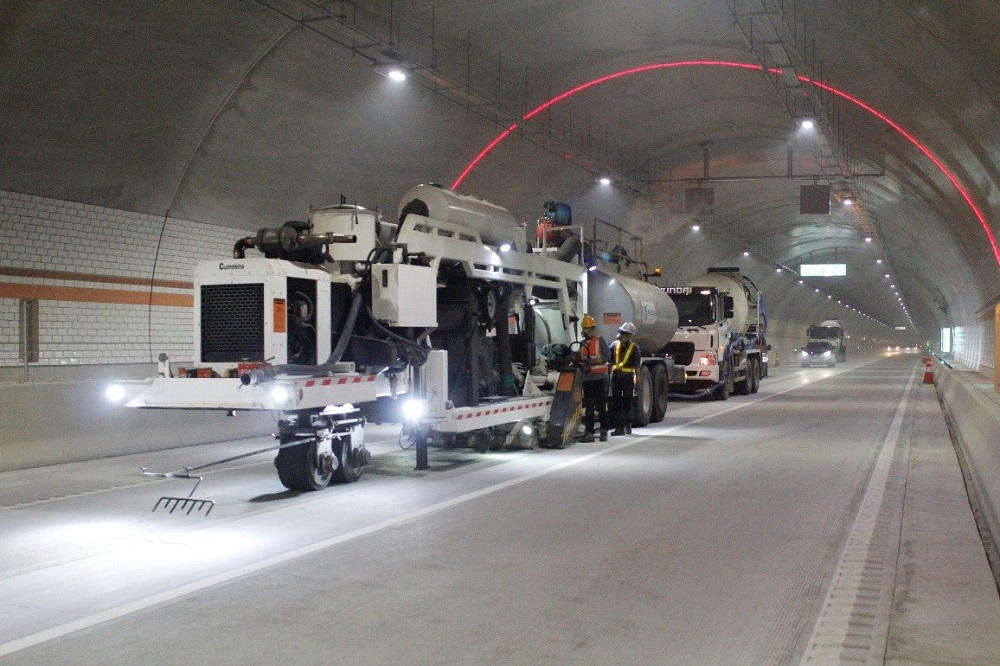 South Korea has a small land area, but many cars. An aggressive highway-building campaign has resulted in a sophisticated network of state-of-the-art roadways, many of which involve miles of tunnels. A surface treatment developed in the United States — the Next Generation Concrete Surface — has been widely employed in Korea to maintain a safe, smooth driving environment inside the tunnels.

Throughout South Korea’s history, the country’s mountainous terrain and numerous waterways made road travel arduous. Improvements to the road network began in the 1960s, according to the article “Through Mountains and Over the Sea; K-ROADS,” posted on Korea.net, a site maintained by the Korean government. Construction of the Gyeongbu Expressway in 1970 was a major milestone; its completion and the enhanced access it provided spurred growth in Korea’s economy and a virtuous cycle began.

Today, travel times across Korea have shortened dramatically, and “by 2020, a national circular road network with seven horizontal and nine vertical trunks will be completed. This dense grid of roads with a combined length of 6,200 kilometers (3,853 miles) will make it possible to access an expressway from any part of the country in half an hour,” according to the Korea.net article.

Because of the topography, Korea’s road network contains numerous tunnels and bridges. “According to the Korea Expressway Corporation, or KEC, in the last 10 years, Korea’s tunnel mileage has tripled,” said Andrew Lee, Planning and Management General Manager at Hexacon Inc., a construction company specializing in road pavement construction and facility maintenance. “For expressways currently under construction, tunnels represent 43 percent of their length. Sixteen percent of the new expressways are comprised of long tunnels, defined as 3 kilometers (1.86 miles) or more.”

Not only does tunnel construction entail advanced drilling and boring operations, but the finished tunnels pose their own challenge: unless the pavement surface is carefully constructed, the tunnels can be noisy and prone to vibration. “The environment inside these long tunnels can create psychological pressures that are a safety concern,” said Lee.

Furthermore, because expressways are owned and maintained by a corporation, drivers must pay to use them. This, in turn, means the corporation must be highly responsive to the needs of its customers and provide a high level of service. Road owners are expected to provide expressways that are not only free of congestion, but are comfortable and clean.

Next Generation Concrete Surface (NGCS) as a Solution

Roadways in Korea can be classified into three types: expressways, national roads and local roads. Expressways are administered by the Korea Expressway Corporation (a company that constructs and operates an expressway network in the Republic of Korea and internationally) or private corporations. The Ministry of Land, Infrastructure and Transport oversees national roads and local governments administer local roads.

To help meet its goal of extremely high quality, the Korea Expressway Corporation chose to install the Next Generation Concrete Surface (NGCS) in its long tunnels. Developed by the International Grooving & Grinding Association (IGGA) and the American Concrete Pavement Association at Purdue University between 2006 and 2008, NGCS is the quietest non-porous concrete surface available. It is installed using conventional diamond grinding equipment, with the first step being to flush grind the concrete using 1/8-in. wide blades with 0.035-in. spacers. (The Korean work used a slightly wider spacer configuration to accommodate local aggregates and concrete mix designs.) Then 1/8-in. wide longitudinal grooves are saw-cut to a depth of 1/8 to 3/16 at ½- to 5/8-in. centers. Next Generation Concrete Surfaces are smoother and flatter than ordinary pavements; they have a consistent profile with a predominantly negative texture, absent of positive or upward texture elements.

In 2014, with assistance from its Research Institute, the Korea Expressway Corporation completed an NGCS pilot project. Since that time, their research into, and implementation of, NGCS has grown steadily. Today, NGCS is used throughout South Korea and all new expressway tunnels that are 2 kilometers (1.24 miles) or more in length have NGCS. Use of the surface is now expanding to national highways and local roads. There are nearly 1.5 million square yards – 200 lane miles – of NGCS in South Korea.

Preliminary tests of the NGCS during the pilot project, conducted by the Korea Highway Traffic Engineering Institute, demonstrated noise reduction of 1.5-7.5 dB(A). A flatness of 0.88 m/km was achieved and IRI was 0.65 m/km. Improvement of friction forces, tested according to the ASTM E 501 sliding friction test, was an average of 52.7 on the sliding resistance index (SN).

Per the Korea Expressway Corporation Design Guidelines for jointed concrete and concrete in tunnels, surface treatment can be implemented after the concrete pavement strength is secured. Field core tests must demonstrate compressive strength of 30 MPa or more. An IRI standard of 1.6 m/km or less for earthwork and tunnels (2.0 m/km or less on bridges) must be satisfied prior to surface treatment, as well.

NGCS installation performed by IGGA member company Hexacon, Inc. is representative of surface treatments done across the country. Hexacon was established in 2013, when it acquired two Diamond Products PC-6000 grinding machines and offered services as a diamond grinding company. They have since branched into NGCS work.

Projects performed by Hexacon include:

“Because tunnels are dark and confined compared to earthworks [outdoor surface paving], it is difficult to manage the quality of concrete pavement construction, resulting in poor ride or serious noise problems after opening to traffic. Generally, a diamond grinding method is used to solve roughness problems in old and new concrete pavement. However, it is a problem when the protruding fins are broken or worn out; it has to be re-constructed to renew its functions. NGCS is developed and applied to solve this problem.”, said Hyung-Bae Kim, Ph. D., Research Director, Pavement & Material Research Division, Research Institute of Korea Expressway Corp.

Currently, most NGCS in Korea has been installed in tunnels, but the surface is rapidly being applied to earthwork and bridges because of its various advantages such as safety, smooth driving and preserving pavement in these severe conditions

“The NGCS and its smooth, low noise, high friction surface is a perfect fit for the road building and maintenance challenges we see across South Korea,” said John Roberts, executive director of the International Grooving & Grinding Association. The IGGA is proud to be a part of the solution helping the Korea Expressway Corporation and Hexacon to employ new cutting-edge technologies to meet these challenges for the people of South Korea.

This article was written by Kristin Dispenza, Advancing Organization Excellence (AOE) for IGGA.