You are at:Home»News»Preparing for Trump’s Infrastructure Plan 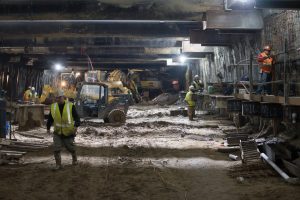 Also in October, the Trump campaign released the Ross-Navarro Plan illustrating Trump’s plan to utilize tax credits to encourage private investment in infrastructure. On November 29, 2016, President-Elect Trump nominated Elaine Chao, who served as Labor Secretary under President George W. Bush and Deputy Secretary of Transportation and Director of the Peace Corps under President George H.W. Bush, to be his Transportation Secretary. On December 20, 2016, President-Elect Trump’s transition team announced the creation of an ‘Infrastructure Task Force’ to manage the new President’s plan to spend up to $1 trillion on infrastructure projects. On January 13, 2017, Trump told the Wall Street Journal that he will be appointing Richard LeFrak and Steven Roth, two New York real estate developers, to co-chair the oversight of project selection and spending under Trump’s infrastructure plan. On January 20, 2017, Trump and his running-mate, Governor Mike Pence of Indiana, were sworn in, kicking off the Trump Administration.

President Trump has repeatedly expressed desire to invest in American infrastructure. He has repeatedly cited $1 trillion as the size of the plan he prefers. House Speaker Paul Ryan has said publically any infrastructure plan will be discussed when Congress completes the Fiscal Year 2017 budget process in late April in order to carve out funds for the legislation. On January 24, 2017, Senate Democrats unveiled their infrastructure proposal ahead of Republicans or the White House.

While details of President Trump’s infrastructure plan have not yet been unveiled, the $1 trillion figure makes finding the funds for the plan a particularly large challenge. It is very likely paying for any plan will have multiple streams and sources, which will, in and of themselves be subject to debate and negotiation.

Specifically, the plan’s success will depend on how it balances funding and financing to accumulate enough support for passage. Funding describes the federal dollars directed to (or funding) infrastructure projects, and is generally more favored by Democrats, while financing refers to the dollars leveraged to finance infrastructure projects, and generally favored by Republicans. Below, listed from most funding oriented to most financing oriented, are the most popular proposals for mitigating the cost of an infrastructure plan.

Tax Reform: Any discussion about taxes in America automatically becomes riddled with complexity; infrastructure funding is no exception. There have been discussions on Capitol Hill for a number of years surrounding undertaking tax-reform, specifically of the business and international tax code, as a way to find money for government spending such as infrastructure.

Private Funding: President Trump has repeatedly cited using private dollars to build infrastructure. The President’s comments indicate he would like to use tax credits or greater utilize already-existing mechanisms to persuade private industry to invest in infrastructure. President Trump has proposed $137 billion in tax credits for investors who help finance infrastructure projects. Private Activity Bonds (PABs) or Public Private Partnerships (PPPs) could facilitate greater private investments. PABs allow private investment in different types of infrastructure by making interest earned on the investment principle exempt from income or capital gains taxation. PPPs are joint venture partnerships between public and private entities to finance large infrastructure project by sharing the risk, costs, and financial gains. In order for PPPs to be effective and attractive to private investors, there must be a mechanism for a return on the investment, such as tolling on roads or metering increases for water projects, which is often difficult to create or predict with public infrastructure.

Almost as important as figuring out the cost and pay-for structure of the bill is engineering the mechanisms for putting the funding to work. Determining what constitutes infrastructure, identifying infrastructure projects, and getting the dollars out the door are the primary objectives.

What is Infrastructure: Any infrastructure bill will have to define the infrastructure intended to be addressed in specific terms. As an example of why specificity is needed, the term “transportation infrastructure” could mean highways or it could mean bike paths, which are very different in terms of cost, benefit, and economic demand generation. Defining infrastructure is important in order to ensure that less glamourous or observable upgrades, like sewer system upgrades or water treatment facilities, are not crowded out by high-profile projects like highways and bridges.

[NUCA’s Position: Infrastructure must be defined to include water treatment, delivery, and utilization infrastructure. Despite other forms of infrastructure being arguably more glamorous, water infrastructure provides one of the highest returns on investment, significant economic demand generation, and is essential to public health and safety.]

Identifying Infrastructure projects: The term “shovel ready,” which was used to describe projects that were ready for construction in selling the 2009 Stimulus Package (but turned out not to be quite so ready), will and should be a much more scrutinized term in any infrastructure plan. Identifying the infrastructure projects that receive consideration and funding will likely be a new process. State Governors and Legislatures will likely be asked to identify a specific number of projects, either by number or cost, that could begin construction within a short, predetermined, period of time after the legislation is enacted. Congress will then have the ability to vet and approve projects for their benefits, cost-effectiveness, and economic attributes.

[NUCA’s position: State and local lawmakers know better than Washington which areas of infrastructure improvements are needed most in their areas. Lawmakers should take politics out of the process and allow the projects of the greatest need and economic benefit in each state to receive priority funding.]

Getting Dollars to the Projects: As a result of the 2009 Stimulus Package, lawmakers are much more sensitive to ensuring tax-dollars are utilized for their intended purpose, so ensuring that dollars reach their intended recipients will be a point of debate. There are currently existing programs that are designed for financing infrastructure projects, such as TIGER grants for transportation projects and State Revolving Funds (SRFs) for water infrastructure projects that are both effective and popular. The creation of an infrastructure bank or a water trust fund have been discussed for as a conduit for federal dollars to reach local infrastructure projects, but would take time to set up and create a bureaucracy that would delay dollars from reaching the projects. It is likely that the Trump infrastructure plan will utilize both existing channels and create new ones, especially if tax reform dollars become the dedicated funding source.

[NUCA’s Position: NUCA supports the creation of dedicated and sustainable funding mechanisms, insulated from the federal appropriations process, to combat long-term funding shortfalls. In the short term, there are trusted programs that should be utilized to funnel dollars to projects such as the SRFs.]

While there remains a lot about the infrastructure program that we do not fully know, there are some things, mentioned above, that we do know and should begin preparing to address. Our primary objective is to ensure that water and underground infrastructure is not left out. Visually or politically appealing projects will undoubtedly be a part of the final mix, but we must also convince our lawmakers of the job-creation, economic, and health and safety benefits of investing in water infrastructure projects.

As mentioned above, project selection is likely to come from the state and local level, meaning our members need to be meeting with state legislators, governors, and planning commissions to ensure that decision-makers at the local level understand the value and need for water infrastructure projects. Our second objective is to make Congress act. Infrastructure needs are too great and public support is too high to allow Congress to play politics or get away with their recent propensity for not backing their talk with action. NUCA must push Congress, through outreach, meetings, coalitions, and grassroots action, to make progress by regularly and consistently applying pressure to lawmakers at the state and federal level.