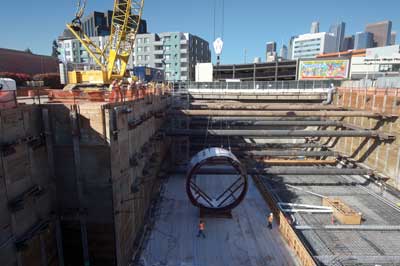 Portions of the TBM are lowered during an Oct. 19, 2016, ceremony for the Regional Connector project in Los Angeles. With the passage of Measure M in the November election, more projects will follow. (Photo by Gary Leonard for Metro.)

We enter 2017 on a promising note for the tunneling market in North America. The November election in the United States showed strong support for public transportation with the passage of Measure M in Los Angeles and ST3 in Seattle.

Measure M is a sales tax measure that will allocate $860 million annually for transportation projects in the Los Angeles area for the next 40 years. Measure M is a follow-on tax increase to Measure R, which took effect in 2009. The passage of Measure R has led to an expansion of the LA Metro transit system, including three mega-projects underway that include tunneling and underground construction: the Crenshaw/LAX, Regional Connector and Purple Line Extension Phase 1 projects. Metro is already moving forward with the Purple Line Phase 2 as the board was to approve Tutor Perini/O&G as the contractor.

ST3 in Seattle will provide $54 billion in funding to expand and improve transportation in the Puget Sound region, including 62 additional miles of light rail to complete the 116-mile regional system. Sound Transit is currently building extensions to the north and east, and will continue this expansion in the coming years.

In the U.S. presidential election, both candidates talked about the need to build infrastructure, which should bode well for the tunneling market as well. One of the projects most closely associated with the need to upgrade our infrastructure is the Gateway Project in the New York metropolitan area, which includes construction of a new tunnel under the Hudson River to provide additional capacity and allow the existing 100-plus-year-old tunnel to be rehabilitated.

RELATED: Is this the Golden Age of Tunneling?

HNTB’s Diana Mendes, senior vice president and leader of the firm’s transit/rail market sector, shares her views on the results of the election in this issue’s Commentary on page 50.

In this issue we present our annual Tunnel Industry Outlook in which we poll tunneling professionals across the continent on their views of the market, its opportunities and challenges as we enter the New Year. The panel, which comprises a cross-section of engineers, contractors and vendors, share the consensus that the market is rife with opportunity, although not without some obstacles that still need to be overcome – including a need for skilled workers, a lack of funding, and increasingly more complex projects. To see the full Outlook, see page 14.

As always, each new year begins with a bang in January with the presentation of the Moles and Beavers awards in New York and Los Angeles, respectively. With the World Tunnel Congress in San Francisco now a memory, 2017 also sees the return of the regular U.S. tunneling event as RETC heads to San Diego in June. I hope to see many of you at these, and other, events in the coming months.