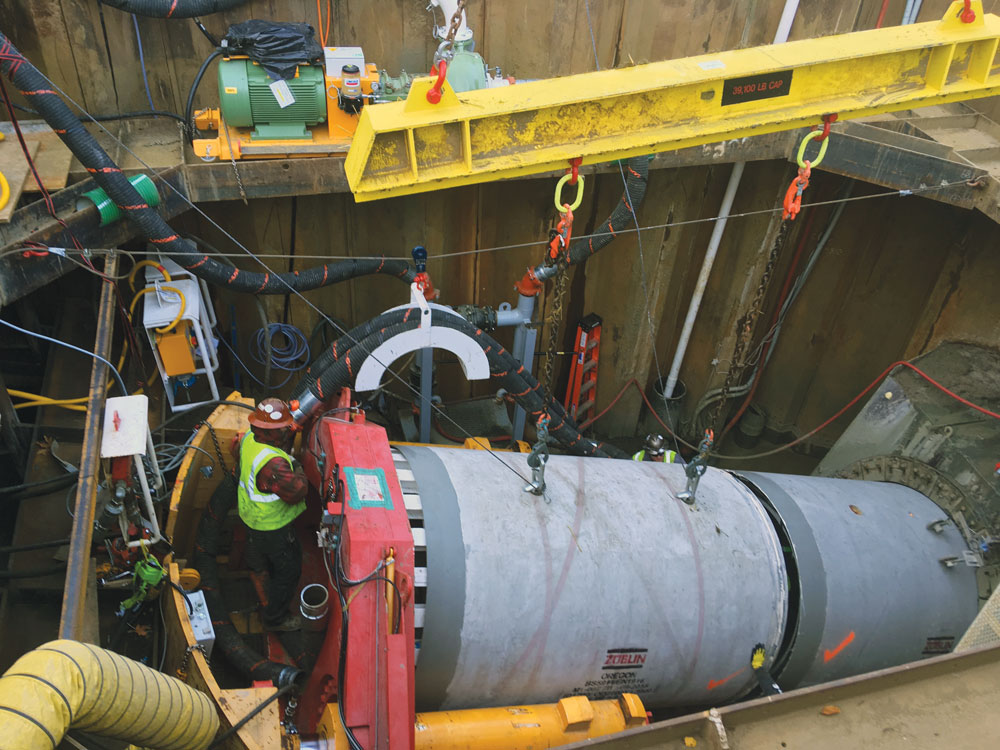 Michels Corp.’s microtunneling team extended the limits of technology by successfully completing a 470-ft long tunnel with a tight, U-shaped vertical curve under the Tualatin River in Tualatin, Oregon.

The Tualatin Interceptor and Siphon Improvements King City Siphon will replace the original wastewater interceptor which was constructed in 1974 and has reached the end of its useful life. The new siphon – a non-gravity fed utility – was fitted with seismically resilient pipe that is better suited for the corrosive environment within the pipeline. The specialty pipe was designed in and shipped from Malaysia for this project.

The tunnel was bored in less than a month, holing through in late November; comprehensive planning took substantially longer. Michels worked on the design-build project with project owner Clean Water Services, general contractor Mortenson, and lead engineer Kennedy Jenks for more than a year to design and complete it. That process included a comprehensive review of Michels’ many trenchless construction options to determine which one had the best potential for success. Ultimately microtunneling was determined to be the best fit. 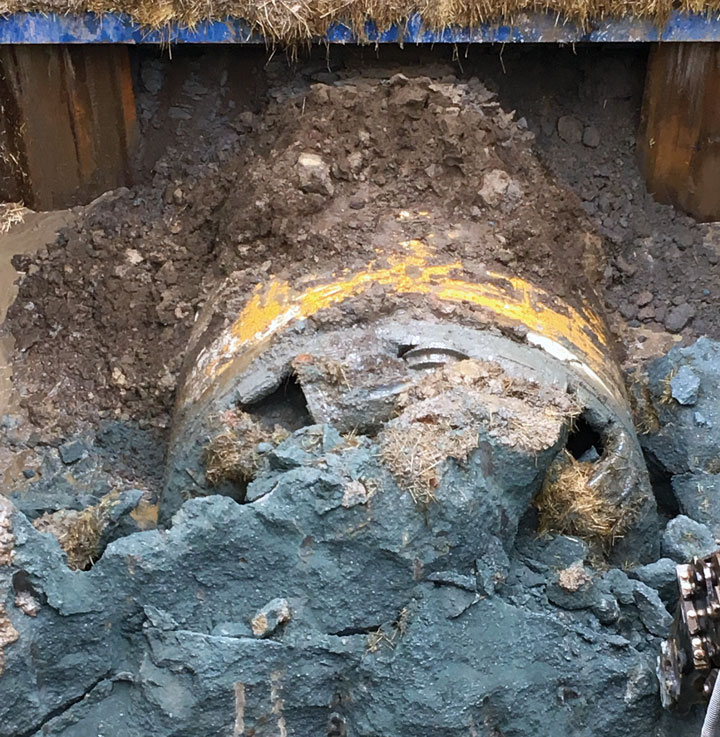 The Tualatin project required the boundary-pushing design to allow the siphon system to meet the required functionality with a minimal construction footprint. Typically, a microtunneling project would be launched and received from watertight, secant pile shafts up to 60 ft deep to allow for a straight alignment or minor horizontal and vertical curves. However, this project used 20-ft-deep sheet piling shafts, resulting in significant cost savings.

Michels took on the challenging task by proposing the vertical U-shaped curve alignment, even though a similar project with such a large curve or tight radius had not been previously executed in North America. Michels engaged many industry leaders to complete the project. Jackcontrol AG helped in designing and supplying the RCP jacking pipe and hydraulic joints. Aldea Services assisted in technical design of the tunnel and provided oversight. Herrenknecht consulted on the MTBM capabilities and purchase of a new AVN 1800. A VMT gyro steering control system was configured on the MTBM to ensure tight line and grade tolerances were met. In addition, Michels included Derrick equipment and a big bowl centrifuge in its custom-built separation plant.

Line and grade are critical to the success of the siphon project as challenging as this one. After the team was assembled and many design meetings were held, some unique challenges emerged. Among them were:

When river crossings are encountered, issues that could be generated from tunneling include inadvertent flows of the drilling fluids, settlement of the river and heave. During the investigation of the soils, it was determined that the upper region of the tunnel would be in the Missoula Flood Deposit formation (a sandy clay) with blow counts ranging from as low as 4 to 12, and then entering into the Hillsboro formation (clayey sand) with blow counts ranging from 9 to 44. Since steering concerns were very critical, several different soil treatment designs were evaluated during the process to steer the machine on line and grade. The original concept design included a 750-ft radius vertical curve and soil cemented columns. After several iterations, it was determined to tighten the curve radius to 650 ft and shorten the drive to 470 lf to put more of the tunnel alignment into the Hillsboro formation, which had a better potential for steering reaction. However, by tightening the curve radius, additional risk was associated with joint deflection and jacking forces – both proved to be non-issues with the appropriate design. The tighter curve alleviated the need for the intrusive soil-cemented columns through wetlands, and only needed for the front entry wall. The columns added at the front entry allowed for the MTBM to provide a stable steering reaction right from the launch of the tunnel and increased the chances for success. 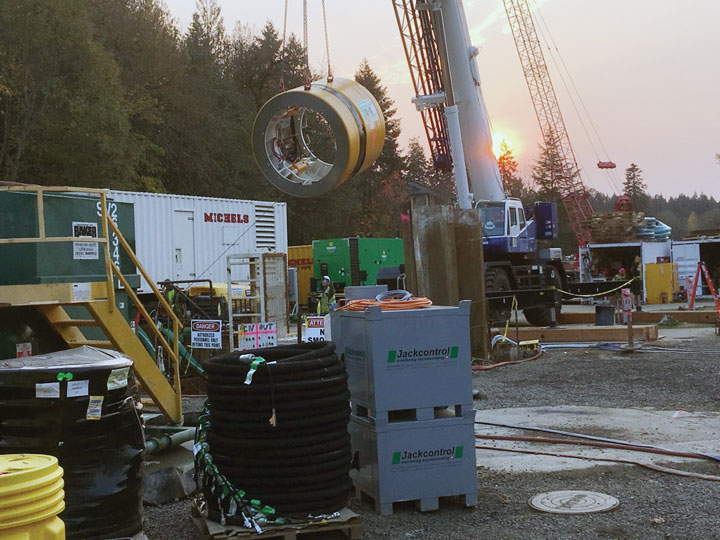 Once all the risks were reviewed, it was time for Michels’ tunneling crews to shine. The project created multiple logistical challenges, which also included the complication of shipping the international RCP pipe and MTBM. International shipping can create multiple complications. However, with knowledgeable management and field staff, these potential problems proved to be non-issues and all shipping was handled on-time. The commencement of the new separation plant and MTBM also can raise multiple potential issues. With the help of local suppliers and other contractors in the area, Michels was able to work through the minor issues and prepare for launch.

While preparing to launch the MTBM, the Michels team developed a strategy to rig the MTBM and set the head as well as each subsequent section of RCP pipe down at a 30-degree slope. After the MTBM was launched, the Michels crew shifted emphasis to steering the tunnel. Placing the bottom curvature of the tunnel into the Hillsboro formation proved to be successful, and the line and grade were perfectly executed. The MTBM was launched and finished in less than a month, and celebrated as a success to the entire team.

Design-build projects always provide unique challenges, however, the team achieved astounding success. This unique project provides the utility industry with an alternate to conventional microtunneling methods and provides new potential for what the industry can achieve. The shallow shafts allow for a smaller dewatering footprint and the precise steering demonstrates that microtunneling can be a viable, successful option for construction on line and grade under waterways, highways, railroads and any other potential obstruction.

While the equipment used on this project is not new technology, it was used in new ways. Current potential cost savings could also prove to be useful as the shafts no longer need to be constructed at such great depths. In addition, using the U-shaped vertical curve to construct siphons can help push the limits of the industry higher.