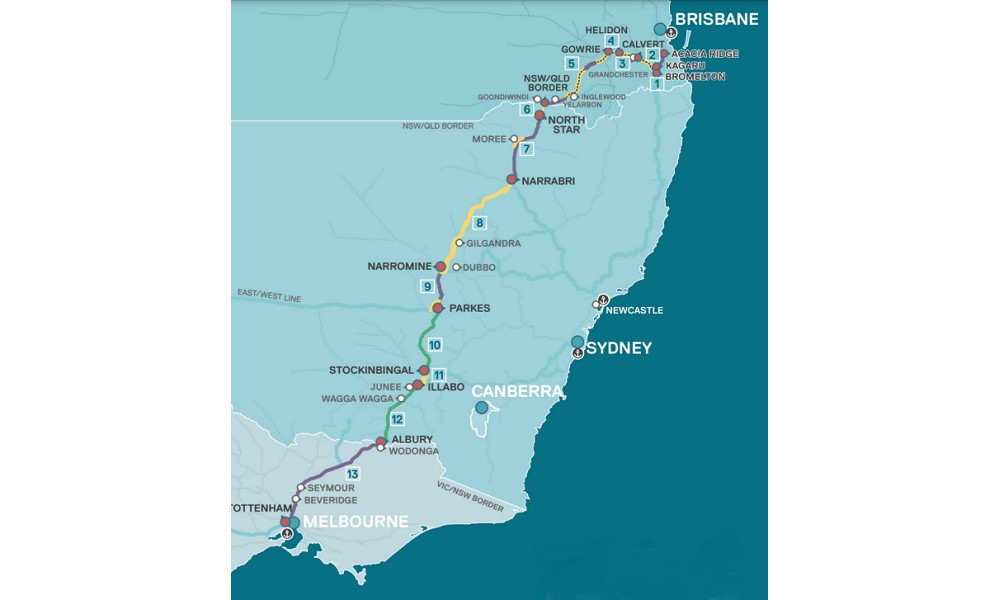 The Australian Rail Track Corporation (ARTC) has appointed Regionerate Rail – a consortium comprising Plenary Group, Clough, GS Engineering and Construction, Webuild and Service Stream – as preferred bidder for the development of the Gowrie to Kagaru section of Inland Rail, a significant milestone for the part of the project running through the State of Queensland in Australia. The contract is worth more than AU$5 billion ($3.6 billion USD) for the design and construct elements, of which approximately €1.3 billion is attributable to Webuild.

The section between Gowrie and Kagaru will be approximately 128 km of new and upgraded rail track through the most geographically challenging section of the 1,700-km rail line between Brisbane in Queensland and Melbourne in Victoria. It will include a 6.2-km tunnel through the Great Dividing Range, the largest diameter freight tunnel in the southern hemisphere. Being delivered as a public-private partnership (PPP), the contract will also include a 25-year maintenance phase after the completion of the section between Gowrie to Kagaru.

“For us, Australia is one of the most strategic markets in the world, given the opportunities that it offers in sustainable mobility and renewable energy,” said Webuild Chief Executive Officer, Pietro Salini. “We are proud of Webuild’s involvement in Inland Rail, especially on the most technically complex section of the project. Our reputation continues to strengthen, built day in, day out by our people in a country that is one of the most demanding markets in terms of quality and expertise required. As a Group, we have been in Australia since the 1970s. We have gradually expanded our activities in a number of states, from Western Australia to New South Wales, from Victoria to Queensland. This latest project, after the North East Link in Melbourne, is the results of years of investment made in a country where we aim to consolidate our presence for the long term – as Australians in support of clients who face the challenges of delivering sustainable infrastructure of quality to their communities.”

In Perth, the Group is completing the Forrestfield-Airport Link, a rail service connecting the eastern suburbs with the city centre. In Sydney, it built the skytrain bridge and viaduct for Sydney Metro Northwest. In the Snowy Mountains, Webuild is developing Snowy 2.0, the biggest hydropower project in the country. The contract on the Inland Rail project is also the second PPP to be signed by Webuild in Australia. In Melbourne, the Group and its consortium partners signed a contract for the North East Link PPP Primary Package, the largest for an infrastructure project in Australia.

As a global leader in the transport sector, Webuild has built more than 13,600 km of metro and rail lines, more than 80,200 km of roads, 946 km of bridges and viaducts, and more than 2,300 km of tunnels and underground works. Its latest projects include a number of high-speed/high-capacity railways to improve Italy’s connections with Austria, France and the rest of Europe. The Terzo Valico dei Giovi-Genoa Hub will strengthen links between the ports of Genoa and the rest of Europe. In the United States, the Group has obtained a final agreement to build the country’s first true high-speed railway between Dallas and Houston.