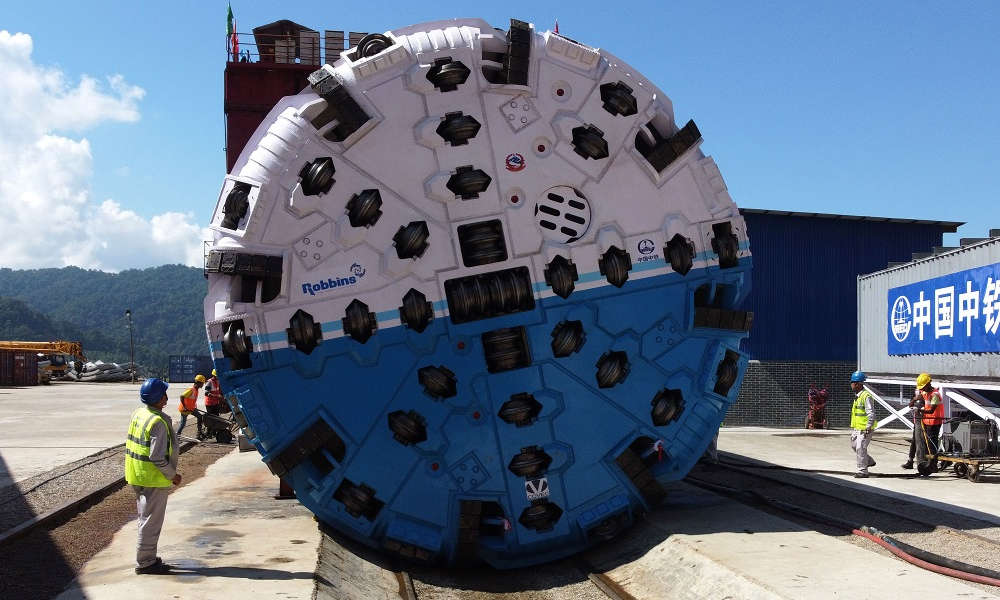 In October 2022, China Overseas Engineering Group Co. Ltd and China Railway No. 2 Engineering Group Co Ltd launched a 6.4 m diameter Robbins Double Shield TBM. The TBM is boring the 13.1 km headrace tunnel for the Sunkoshi Marin Diversion Multipurpose Project (SMDMP) located in southern Nepal.  The tunnel is connected to a new 28.6 MW surface powerhouse on the Marin River to alleviate the shortage of power supply in the area. It will also be used for farmland irrigation in the districts of Dhanusha, Mahottari, Sarlahi, Rauthat and Bara in the Terai Plain, diverting water from the Sunkoshi River to the Marin River.  Since the TBM’s launch, it has bored over 500 m, with a best week of 224.6 m, and a best day of 36.6 m.

The headrace tunnel is being bored through granitic rock with maximum overburden of 1,320 m. Geological conditions may include squeezing ground, fault zones, and water inflows. In particular, a major fault zone is located approximately 4 km into the tunnel at Dhanamana Khola. The machine was customized for the conditions, explains Mr. Liu Fengfan, Project Manager for contractor B-2/COVEC: “The TBM shield is a tapered design to reduce the risk of becoming stuck in squeezing ground; there is an enclosed cutterhead design to reduce the collapse of surrounding rock as well. The TBM has overcut capabilities, and a high thrust. It has also been designed to be equipped with an extra high torque cutterhead drive, as well as strong auxiliary thrust to be used in squeezing ground or weak fault zones to keep the machine from becoming stuck.”

As for the major fault zone, to be reached in approximately June 2023, and other zones of concern, Mr. Liu’s plan is well-thought-out: “We have prepared the advance geology forecast along with technical measures and equipment to cope with the extraordinary geological conditions. These include advance drainage holes, pre-excavation grouting (both ordinary and chemical), and other methods based on our experience.  When we reach the major fault zone at Dhanamana Khola we will go slow, with more probe drilling while in the fault zone.”

The tunnel is the machine’s second: on its 12.2km first tunnel (the Bheri Babai Diversion Multipurpose Project/BBDMP), the TBM finished nearly one year early and achieved 1,202 m advance in one month. “The Robbins TBM at BBDMP successfully broke through the 12.2 km tunnel and overcame extraordinary geological conditions especially in fault zones. Its stable and excellent performance and function have been verified very well. We have much confidence in the TBM to be used in SMDMP,” said Mr. Liu.