You are at:Home»News»International News»Robbins Main Beam Breaks Records in China 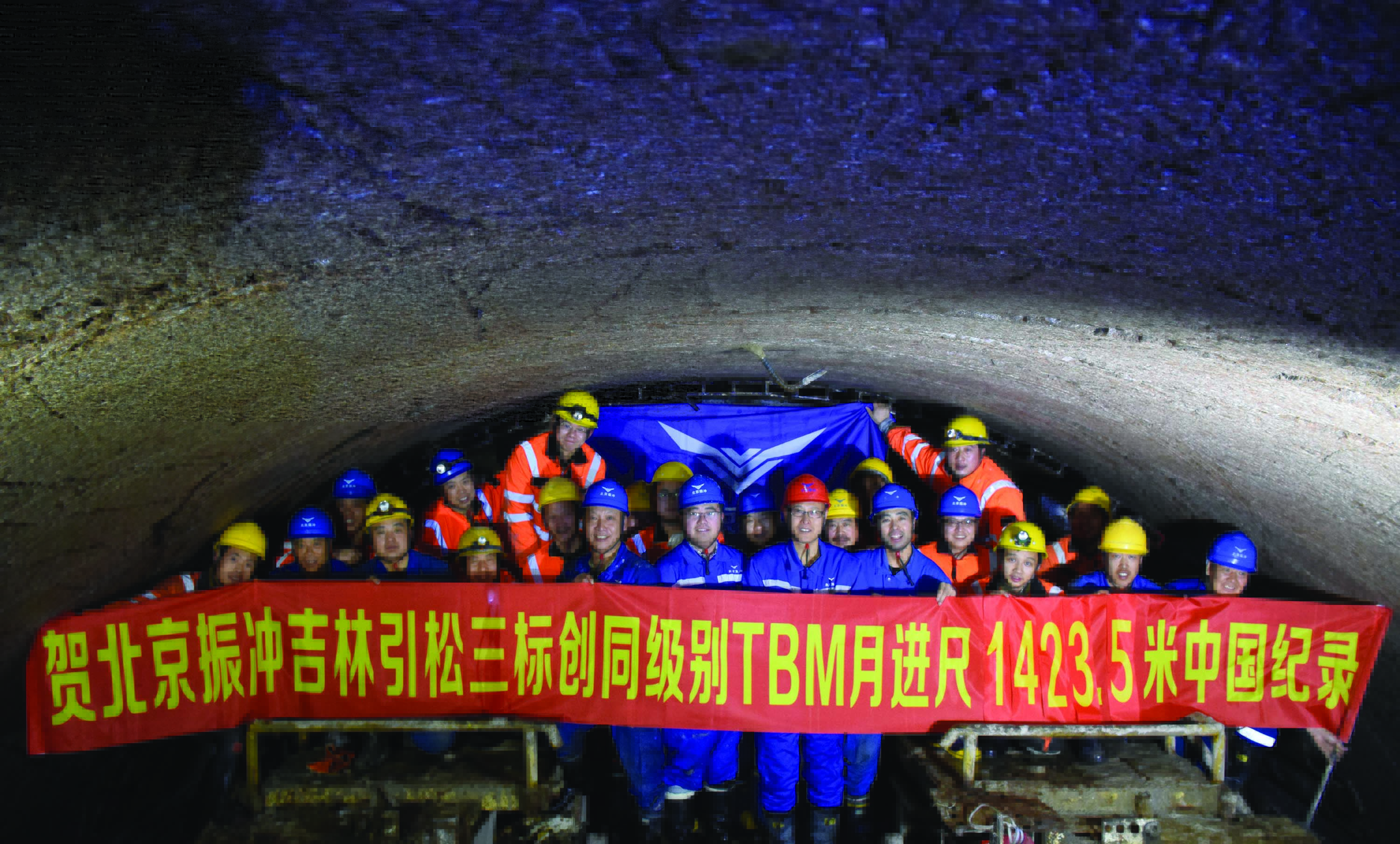 The world record for the size class is held by another Robbins machine, set more than 20 years ago at the Tunnel and Reservoir Plan (TARP) in Chicago: 1,482 m (4,862 ft) in one month. However, given the differences in rock conditions, this Jilin project record is significant.

At TARP, the rock was relatively homogeneous dolomitic limestone averaging 145 MPa/21,100 psi with occasional rock bolts; at Jilin the rock types were rated from 35 to 206 MPa UCS (5,100 to 30,000 psi), and identified as tuff, granite, sandstone, and andesite with multiple fault zones—conditions requiring nearly continuous ground support.

Despite the difficult conditions, the Jilin machine has achieved an average monthly advance rate of 708.3 m since the start of boring in March 2015—more than three times the average monthly rate of a drill-and-blast operation on another section of the project.

“It is now very evident that well-equipped, open-type Main Beam TBMs with specialized features for difficult ground can traverse faults and large water inflows much faster than conventional tunneling methods. This fact, coupled with the high performance capabilities as demonstrated at Jilin, lowers the cost and time to complete long tunnels in difficult ground,” said Robbins President Lok Home. 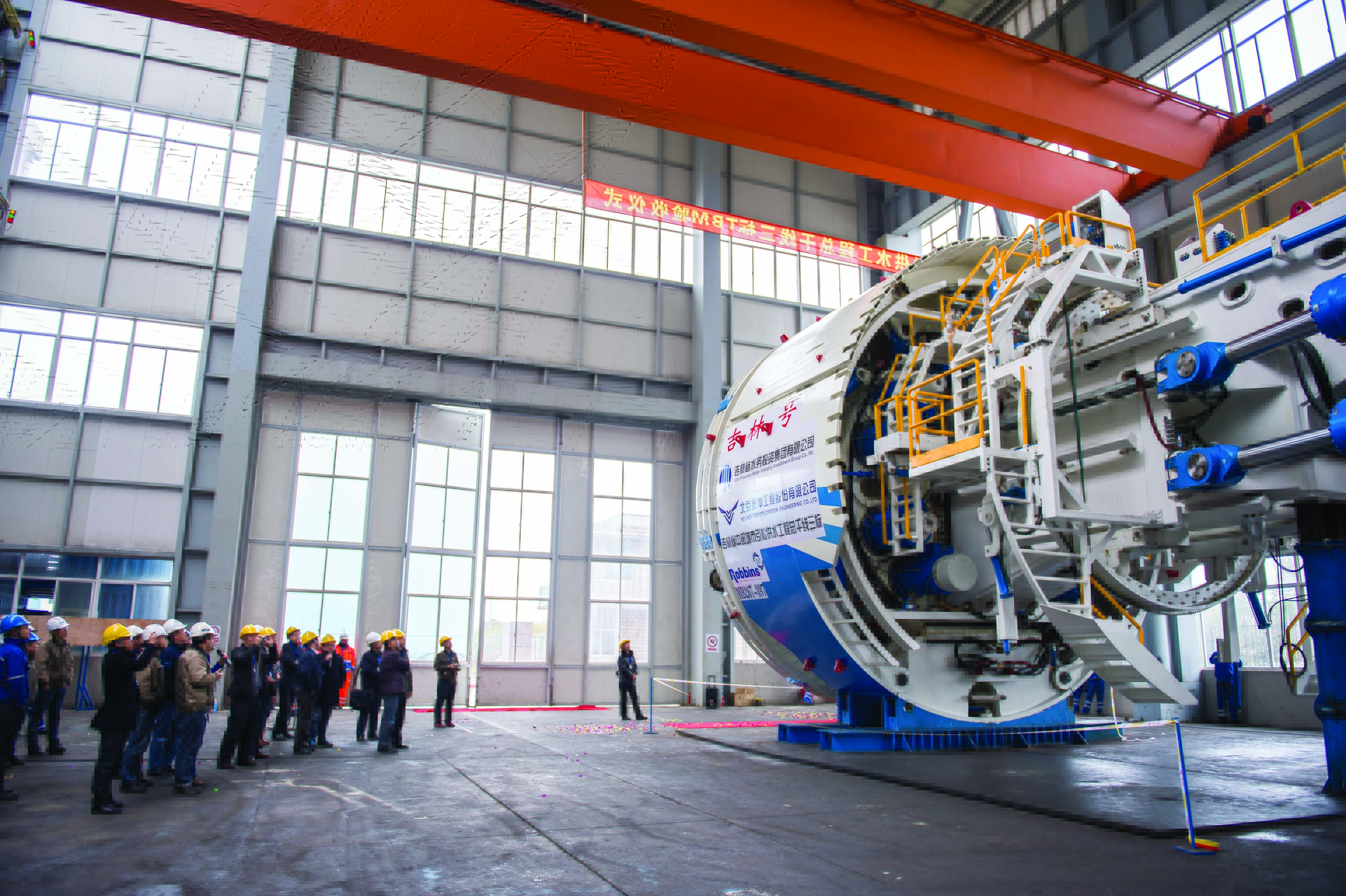 The Jilin Lot 3 tunnel, which is being bored as part of a water conservation project, will be 24.3 km (15 miles) long when complete. Under contractor Beijing Vibroflotation Engineering Co. Ltd. (BVEC), the machine has excavated 14 km (8.7 miles) of the tunnel as of January 2018.

Throughout its bore, the Main Beam is expected to traverse a total of 24 fault zones. The TBM was designed accordingly, and is equipped with four rock drills, McNally pockets in the roof shield for the ability to install McNally slats, a ring beam erector, and a shotcrete system. The McNally slats were used in difficult ground encountered in the tunnel.

The McNally Roof Support System was designed and patented by C&M McNally and licensed for exclusive use on Robbins TBMs in certain markets. By replacing the roof shield fingers on a Main Beam TBM, the McNally system prevents movement of loose rock in the critical area immediately behind the cutterhead support. The system has been tested and proven on projects worldwide—including the world’s second deepest civil works tunnel, the 2,000-m (1.2-mile) deep Olmos Trans-Andean Tunnel in Peru—to increase advance rates while still maintaining worker safety on Main Beam machines in difficult rock conditions.

The Jilin TBM’s first fault zone was encountered after just 87 m (285 ft) of boring, requiring cooperation between the owner, Jilin Province Water Investment Group Co. Ltd., contractor BVEC, and Robbins field service. Water inflows and collapsing ground in a section measuring 1,196 m (3,926 ft) long were resolved with a combination of McNally slats, grouting and consolidation of the ground ahead of the machine. Ground support overall consists of wire mesh and shotcrete. Tunnel Reflection Tomography (TRT)—a method of ground prediction using seismic waves—is also being used to detect changing conditions ahead of the TBM.

Despite the initial challenges, the TBM is now achieving between 40 and 60 m (130 to 197 ft) advance per day. “My colleagues and I all feel that the Robbins TBM is very easy to operate. All components of the system work well during operation, which has ensured our good progress,” said by Tao Yong, BVEC Jilin Lot 3 TBM Site Manager.

The Jilin Lot 3 tunnel is part of the Jilin Yinsong Water Supply Project, which will convey water to the central cities of Jilin Province. The large-scale, trans-regional water diversion project is the longest water supply line, measuring 263.5 km (163.7 miles), with the largest number of recipients benefiting from it in the history of Jilin Province. The construction project will divert water from Fengman Reservoir at the upper reaches of Di’er Songhua River to central regions of Jilin Province experiencing chronic water shortages. These regions include the cities of Changchun and Siping, eight surrounding counties, and 26 villages and towns under their jurisdiction. Tunneling is expected to be complete in late 2018.