You are at:Home»News»Robbins TBM Sets Standard on Hard-Rock Tunnel in Fairfax, Va.

In Fairfax, Virginia, installation of a new water main met with more than the usual handful of challenges. Diabase rock exceeding 345 MPa (50,000 psi) UCS stopped the initial contractor (using a modified Lovat-built Double Shield machine) in its tracks, which led to the selection of a new contractor (Southland) and a new machine. 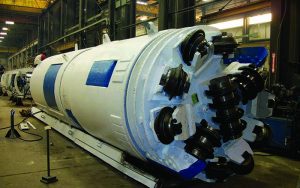 On May 8, 2014, a 2.2 m (7.3 ft) Robbins Double Shield TBM broke through, completing 2.7 km (1.7 miles) of hard-rock tunneling in a test of endurance and fortitude. In doing so, the small diameter machine has also set an unofficial North American record for excavation of high rock strengths in the 2 to 3 m (6.5 to 9.8 ft) TBM size class.

For John Marcantoni, Project Manager at Southland Contracting, the accomplishment cannot be overstated: “The rock that we encountered was greater than 50,000 psi in many places. From start to finish, it took about 1.5 years to go 1,890 m (6,200 ft).” When the contractor was awarded work at the Corbalis to Fox Mill Water Main Project, they removed the stuck TBM at the 730 m (2,400 ft) mark, with the majority of tunneling still left to go.

The tunnel is part of a larger 3.44 km (2.14 mile) scheme, approximately 762 m (2,500 ft) of which was open-cut. The remainder of the tunnel required a TBM due to its depth and proximity to highways, building and other structures. Drill-blast was prohibited due to the presence of two active petroleum lines running parallel to the tunnel and providing service to nearby Dulles Airport. 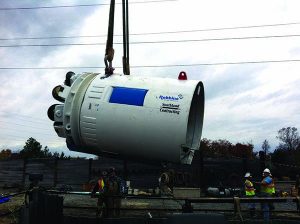 Multiple challenges presented themselves during tunneling: “Our issue was not water inflows, faults or seams, it was actually the consistently hard rock. The machine was working at its highest capacity just to cut the rock. We kept pushing—a lot of our success was in maintaining the cutters and the ability to keep pushing as hard as we could. We had a rigorous maintenance schedule,” said Marcantoni.

The strength of the rock not only tested the equipment, but also generated a lot of heat, making working conditions and cooling the equipment difficult. Despite the equipment challenges and much higher than normal cutter wear, the machine continued to push forward. Overall, TBM averaged 3.7 to 4.0 m (12 to 13 ft) per day, with crews of 10 personnel working in double shifts of 10 hours each. “I don’t know for sure if this project is a record, but given the rock strengths, the number of cutters we used, and the raw heat being generated, I wouldn’t be surprised,” said Marcantoni.

The record is all the more remarkable considering the history of the TBM. Originally built in 1999 for a Cleveland, Ohio, sewer tunnel, the Corbalis to Fox Mill Water Main is the machine’s seventh project. After extensive research on the record, the only similar project found in North America was excavated by a 2.1 m (7 ft) Robbins Double Shield in Montreal, Quebec. Bored in 1998, the St. Jerome Tunnel was excavated through rock at maximum strengths of 294 MPa (42,600 psi) UCS. 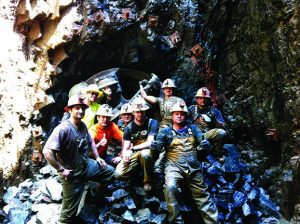 The Southland crew celebrates the breakthrough of the Robbins TBM on May 8, 2014, at the Corbalis to Fox Mill Water Main Project in Fairfax, Virginia.

Now that tunneling is complete in Fairfax, it will take around four months to install the final carrier pipe, a 1.4 m (54 in.) water main, and complete all tie-ins. Project owner Fairfax Water Authority expects to be able to expand capacity of its existing water transmission system by the end of 2014. The new pipeline will extend the existing water main to Fox Mill pumping station, providing additional transmission capacity to local customers.

Marcantoni says he’s most proud of the hard work on behalf of Southland’s employees. “Their perseverance made the difference, in maintaining the machine and dealing with the heat that was generated. In particular, our General Superintendent Norm Gray and Superintendent Lamar Haynie deserve some credit. We were able to push through and make the project a success with this machine.”

The tough TBM will go on to be used by Southland on another rock tunnel in Atlanta, Georgia.

The News In Brief: