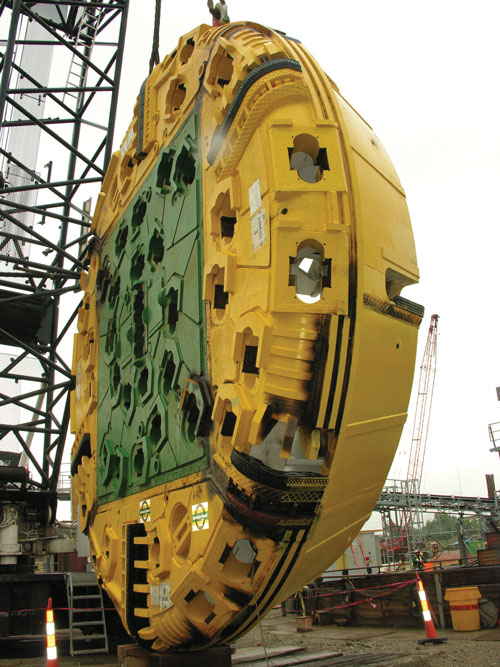 The 27-ft diameter machine boring the under Cleveland is the second-largest TBM in operation in the United States.

Cleveland, Ohio, is famous – perhaps infamous – within water pollution control circles for its role in helping spark an environmental movement in the United States. It was the Cuyahoga River fire in 1969 that caught national attention (although it was not the first – or worst – fire in the river’s history, nor unique among rivers in industrial American cities), putting clean water on the forefront of the American conscience and eventually leading to the passage of the Clean Water Act in 1972.

This development, of course, has been a boon for the tunneling industry as cities across the country are implementing tunnels to capture sewer overflows before entering natural waterways. The Northeast Ohio Regional Sewer District (NEORSD), the authority created to address the combined sewer overflow and treatment inadequacies in the wake of the movement, has a long history of tunnel construction dating back to nearly its formation.

Currently, the district is in the midst of its largest project to date, the Euclid Creek Tunnel. Not only is the tunnel the longest and largest diameter project undertaken, it also brings with it technical challenges associated with tunneling under the lake, tunneling in potentially gassy ground, and grouting behind the liner to mitigate potential spalling of the excavated rock.

The Euclid Creek Tunnel project is the first of seven tunnels for the sewer district as part of Project Clean Lake, a 25-year program to reduce pollution to Lake Erie and its tributaries. The Euclid Creek Tunnel will be built using a Herrenknecht one-pass, hard-rock TBM excavating a 27-ft diameter tunnel, 3.4 miles in length. The tunnel will be segmentally lined to an ID of 24 ft. Segments are being cast by CSI Hanson in Macedonia, Ohio. This represents the district’s first use of a hard-rock TBM with segments. It is also the second-largest TBM currently operating in the United States.

The tunnel will be driven predominantly through thinly bedded shales and interbedded siltstone of the Chagrin shale formation at an approximate depth of 200 ft. A launch shaft, reception shaft and three intermediate shafts are being built as part of the contract. A portion of the alignment extends under Lake Erie ñ a first for the District.

McNally/Kiewit JV was the low bidder at $198 million and was given NTP in April 2011. Hatch Mott MacDonald provided tunnel design services for the District. Jacobs Associates is providing construction engineering services. The four-year project is on pace to finish in April 2015. The launch shaft will be used as part of the Dugway Storage Tunnel, which is the next tunnel component of Project Clean Lake, which was the result of a consent decree.

A 160-mgd pump station, to be built under a separate concrete, will be constructed adjacent to the launch shaft to bring flows from the Euclid Creek and Dugway Storage tunnels into existing interceptors that pass through the area, carrying them to the Easterly Treatment Plant, which will be renovated as part of the consent decree. Walsh/Atkinson JV was awarded the $70 million pump station contract. The tunnel has been excavated and lined through 6,000 lf as of late February.

Prior to the Euclid Creek Tunnel, the District’s tunnels have been built using two-pass lining systems consisting of combinations of rock reinforcement and steel rib and lagging, in conjunction with a cast-in-place lining. However, a number of these projects have had to deal with the occurrence of gas, localized tunnel instability due to rock wedges and blocks, and time-related rock deformations associated with slaking, overstress or both.

Because relatively high horizontal in-situ stresses are expected to exceed the rock mass’ compressive strength, spalling behavior is anticipated during tunnel excavation. Recently, the Niagara Tunnel endured delays and cost over-runs because the design-build team’s two-pass construction method was not able to cope with overstressed ground. To avoid similar risks on the ECT, as well as address potential gas infiltration concerns, HMM designed the tunnel with a one-pass, bolted and gasketed lining system.

“The reason behind using the one-pass tunneling method is to manage and mitigate risks associated with the subsurface geology,” said Kellie Rotunno, NEORSD’s Director of Engineering and Construction. “There were some problems encountered with the two-pass system on the Mill Creek tunnel – namely methane gas was encountered and we had some issues with overbreak. Considering that we are going to be tunneling through the same rock on the Euclid Creek Tunnel, we felt we should take steps to mitigate those issues. The single-pass system allows us to get the tunnel grouted and sealed more quickly as we mine, and hopefully will help manage the overbreak and gas issues should they be encountered. In addition, we are hopeful that the one-pass system will provide schedule benefits to the completion of the Euclid Creek Tunnel. Since this project is part of the District’s CSO Consent Decree, it carries the potential for stipulated penalties if we do not complete it on-time.”

HMM specified a tailshield grouting system that will utilize a fast-set, two-component grout to immediately grout the annulus and support the segment rings as mining advances. As this application involves an open face, rock TBM, the quick set time of the grout is also needed to mitigate grout travel forward of the shield toward the TBM cutterhead. Contact grouting through segments will be performed to fill any gaps or voids behind the tunnel lining.

“We tried to anticipate and avoid grouting issues by grouting through the tail shield and using a two-part accelerated grout with a rapid gel time,” Rotunno said. “However, there was a bit of a learning curve at the beginning of the project. The contractor had some issues in getting the grout to gel, which was discovered through drilling check holes through the segments as part of our QA/QC program. As it turned out, there were issues with the accelerator. Once the contractor made modifications to the delivery system and changed accelerators, we’ve been humming right along and there haven’t been any issues with the grout.”

Since beginning the project in April 2011, the contractor has made good progress. Kiewit/McNally has sunk the launch shaft to invert using steel liner plate support in overburden and rock bolts, mesh and shotcrete in rock. Crews used an Alpine Tunnel Miner 105 to excavate a 300-ft tail tunnel and a 120-ft starter tunnel for the TBM, which began arriving in March 2012. A conveyor system was installed to bring spoils from the TBM, through the tunnel and up the shaft.

The TBM – “Mackenzie” – tunneled and lined 6,000 ft as of late February. Shaft 2 at the Easterly Treatment Plant has been excavated 80 ft deep with another 20 ft of overburden remaining. Crews mobilized to Shaft 3 in mid-December to begin construction of a secant pile shaft. To date, 10 primary and seven secondary piles have been completed. Excavation is complete at Shaft 4 (Triangle Park) with reinforcement works continuing, while Shaft 5 (Nottingham and St. Clair) has been excavated to 190 ft with 10 ft remaining.

“Thus far, both the rock and the TBM are performing according to plan,” Rotunno said.

When completed, the Euclid Creek Tunnel will be able to hold 60.5 million gallons of combined wastewater and storm water, helping to keep the Cuyahoga River and Lake Erie clean for future generations.