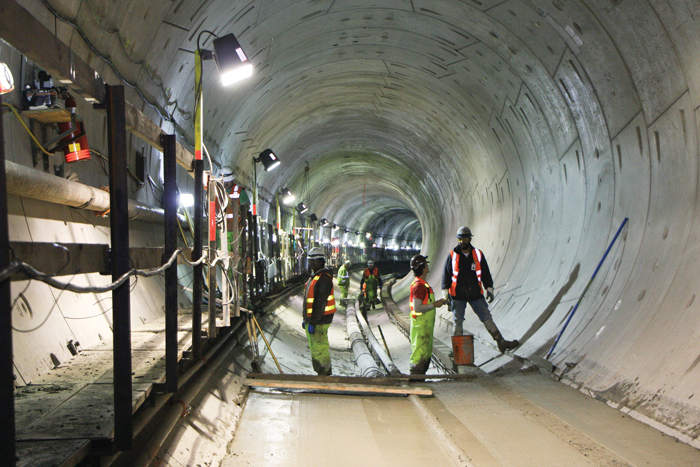 The 3.2-mile University Link segment, which opened March 19, serves the University of Washington and the densely populated Capitol Hill neighborhood.

Since it was created 20 years ago, Sound Transit has been actively engaged in building out a transit system in the greater Seattle area. Recently, the expansion work has had a heavy focus on the underground.

By the end of the year, Sound Transit will have overseen the construction of more than 37,000 ft of twin tunnels, including five underground stations, since 2004. Along with surface and elevated guideway, Sound Transit’s light rail system stretches 15 miles from the University of Washington in the north to SeaTac airport in the south.

2016 has been a busy year for Sound Transit with the agency opening its University Link extension on March 19, and breaking ground on its East Link extension on April 22. Meanwhile, work continues on the Northgate Link extension, which is scheduled to go into service in 2021. Furthermore, the agency is laying out plans for its next wave of projects. 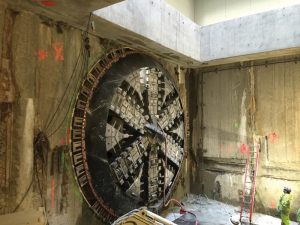 The tunnel boring machine (TBM) mining the tunnel that will serve northbound light rail trains to Northgate beginning in 2021 holed through the wall of its retrieval shaft at the University of Washington light rail station on March 30, completing one of two 3.5-mile tunnels for the Northgate Link Extension.

On March 19, Sound Transit’s newest operating segment – the University Link – opened for business. The 3.2-mile segment connects the Westlake station in downtown Seattle to new underground station at the University of Washington. The segment also includes an underground station at Capitol Hill. The segment, which opened six months ahead of schedule and approximately $200 million below its $1.9 billion budget, serves the University of Washington – one of the largest universities on the West Coast – and the densely populated Capitol Hill neighborhood.

“The response to the new University Link has been outstanding,” said Kimberly Reason, Public Information Officer for Sound Transit. “People have been very hungry for these two stations to open and they have waited through seven years of construction. In fact, we are testing expanded service due to the ridership.”

U220 was awarded to the joint venture team of Traylor Brothers and Frontier-Kemper. It consists of twin 11,400-ft, segmentally lined, bored tunnels with a finished diameter of 18-ft, 10-in., along with 16 SEM cross passages between the twin bores. NTP was issued in January 2010 with contract completion in 2013. The JV used two Herrenknecht EPB TBMs to complete the bores.

U230 was awarded to the joint venture team of Jay Dee, Coluccio and Michels Corp. (JCM). It consists of twin 3,800-ft, segmentally lined, bored tunnels, also constructed by EPB TBM. Because of the shorter length of the tunnel, the JV elected to use a single Hitachi Zosen TBM to complete both tunnel bores. Also included is five cross passages.

One of the significant challenges associated with the University Link project was the crossing of Interstate 5, a major north-south artery traversing Seattle. Construction of the highway included large diameter drilled piles that were situated along the tunnel horizon. In advance of the tunnel drives, Sound Transit in coordination with the Washington State Department of Transportation removed the foundations in the tunnel’s path. The TBM passed under the highway with a shallow cover (15 ft), necessitating a thorough instrumentation and monitoring program.

The drive from the University of Washington station to Capitol Hill also included a crossing of Montlake Cut, a manmade shipping channel, with about 8 ft of cover. The interesting aspect of the crossing was that it occurred just 200 ft into the drive.

“Normally it takes a few hundred feet to get through the learning curve as you adjust to the soils, especially with a new machine,” Gildner said. “But in this case we had this tricky crossing right out of the gate. The crews were able to adapt quickly and complete the crossing successfully.”

Currently, Sound Transit is in the midst of constructing the Northgate Link segment, which adds another 4.2 miles from the University of Washington Station to a new elevated station at NE 103rd Street. Northgate Link includes 3.6 miles of twin-tube tunnel and two underground stations. A $440 million contract was awarded to JCM, the same joint venture that completed the U230 project.  JCM is using the Hitachi Zosen TBM from U230 and a Robbins EPB, which was recently used on a project in Singapore, to complete the bores. To date, five of the six tunnel drives have been completed.

About 3,800 ft of the tunnel alignment traversed under the University of Washington, which created a unique set of challenges for tunnel construction. The school is renowned as a leading research institution, and had strict limitations for noise and vibration – during construction and operation – to ensure that its facilities were not impacted.

During construction, the contractor used rubber-tired vehicles instead of rail to reduce noise impacts. “During construction of the University Link project, we had some issues with the noise and vibrations associated with using steel supply trains,” said Don Davis, Sound Transit’s Project Director for Northgate Link. “With the rubber-tired vehicles, we had no noticeable vibration impacts when traveling under the campus.”

To mitigate noise and vibration impacts during transit service, Sound Transit is using “floating slabs” along the invert of the tunnels under campus. Basically the floating slabs are precast concrete structures that sit on natural rubber pads, resulting in a sort of shock absorber. In anticipation, Sound Transit tested a 400-ft prototype floating slab on the University Link system. “The university is a world-class institution and it is vital that we do not interfere with the sensitive research they conduct,” said Joe Gildner, Sound Transit Project Director for University Link. “As a result, we made the investment to install state-of-the-art floating slabs in our tunnels.”

Unlike the University Link segment, Northgate Link traverses a section of hard glacial till. Crews were able to successfully navigate through the till on the first of two drives, with the final drive remaining. Typical reaches for both University Line and Northgate Link include glacial soils comprising sands, clays and scattered boulders under the water table. 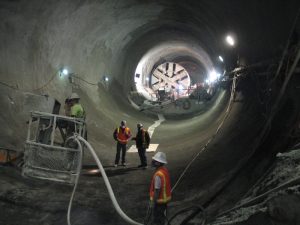 For its tunneling and underground contracts, Sound Transit uses conventional design-bid-build contracting, which the agency and the contracting community are comfortable using. Based on its previous experience, the Sound Transit has adjusted its approach to some aspect of the work. For example, the Beacon Hill station and tunnels project, the first major underground project the agency awarded, included both excavation and systems finishing work (power, tracks, communication, etc.). In its subsequent contracts, Sound Transit has bid finishing work separately from excavation work.

“Since there quite a lot of TBMs available in this size range, we felt we could achieve substantial savings by allowing the use of refurbished machines,” Davis said. “During the bid process we were able to get seven competitive bids, and I think part of that was allowing contractors the opportunity to use refurbished machines. We did, however, specify that certain parts to be furnished as new, including main bearing and screw conveyor.”

While Sound Transit tendered contracts using a low bid approach, contractors were required to submit qualifications regarding key personnel and equipment in advance.

Sound Transit employs standard claims avoidance and risk mitigation of contracting tools, namely a geotechnical baseline report (GBR), disputes review board (DRB) and escrow bid documents. In addition to the DRB, Sound Transit has instituted an “executive partnering” approach which involves the contract parties meeting quarterly in advance of the DRB meetings. “This approach helps reinforce the commitment to communication and shows that the people involved in the project are respected in addition to the contract itself,” Gildner said. 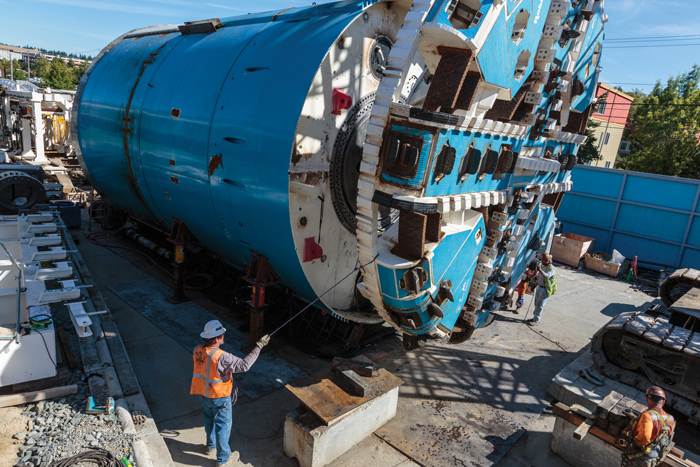 The East Link segment, which recently broke ground, is a 14-mile extension from the International District/Chinatown station south of downtown to Redmond. The segment is mostly above ground, except for a short tunnel below downtown Bellevue.

Two other above ground segments – Lynnwood Link and the Kent/Des Moines Extension – are currently under construction and are scheduled for completion in 2023.

Currently, Sound Transit is planning its next phase of projects. A ballot measure – dubbed Sound Transit 3 (ST3) – will go before voters in the fall. A draft proposal outlining system expansion over the next 25 years was recently opened for public comment, receiving more than 34,000 responses. Sound Transit is in the process of incorporating comments for a final plan for the November ballot.

ST3 includes a number of potential tunnel projects, notably a Ballard to Downtown segment that would include a new rail-only tunnel downtown (the current downtown co-mingles bus and light rail). The plan is expected to be finalized this summer.