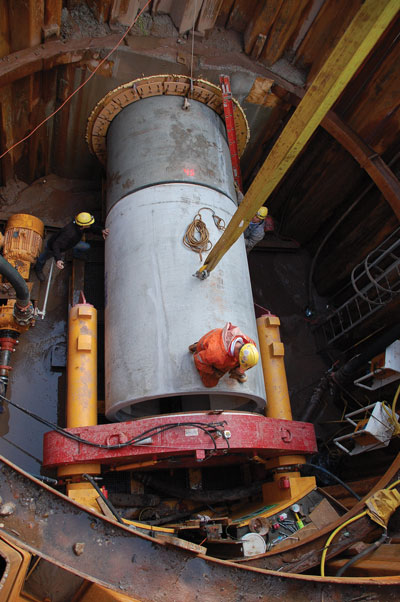 [EDITOR’S NOTE: This is the fourth in a series of articles from Dr. Gary S. Brierley reflecting on the history of tunneling. This first article appeared in the August 2014 issue of TBM: Tunnel Business Magazine and examined tunneling from its ancient roots to the present day. Subsequent articles examine specific elements within the tunneling market, with particular attention paid to the U.S. market. This installment discusses small-diameter tunneling.]

The history of small diameter tunneling is as old as tunneling and mining in general. Most early small-diameter tunnels were simply built by hand and supported (when required) by timber.

The concept of excavating small-diameter holes in the ground by mechanical means, both soil and rock and both tunnels and shafts, dates to the mid-1800s. As an example, a small-diameter tunneling machine was developed for advancing a pilot tunnel through faulted ground at the west portal of the Hoosac Tunnel in 1856. According to Barbara Stack, between 1846 and 1930 approximately 100 patents were issued for all types of tunnel boring machines based on every conceivable mechanical process and for a large variety of tunnel diameters. Stack also reports on a TBM developed by Russell Sigafoos in 1908 that was powered by electricity and which cut an 8-ft-diameter circular hole through 29,000 psi rock for a tunnel near Georgetown, Colorado. Other similar machines were being developed at that time, including machines devoted to various mechanical means for either sinking or raise boring small-diameter shafts.

Stack credits the Northern Pacific Railroad Co. for the development of auger boring and pipe jacking, which it used primarily for installing drainage tunnels below railroad embankments dating back to 1896. From that humble beginning, pipe jacking has developed continuously to modern applications involving a variety of mechanical means and ground improvement procedures, especially construction dewatering. In addition, it was a simple matter to apply various types of shields, with and without the use of compressed air, to the face of a jacked pipe in order to deal with a variety of different ground conditions.

In 1960, Johnson Western Constructors jacked a 120-in. diameter pipe for 1,200 ft from a single pit utilizing a mechanized shield and four intermediate jacking stations with a total jacking capacity of 3,800 tons. Even more interesting, this project was originally designed as an excavated trench but the jacking operation proved to be less expensive. An operator in the shield controlled the excavation process but the intermediate jacking stations were controlled remotely from a control room on the ground surface. One of the few problems encountered on this project was the time it took to remove the tunnel spoil as the tunnel became longer.

Recognition must also be given to the company Mini Tunnels International (MTI), which in 1973 introduced a shield that was capable of erecting a three piece unreinforced concrete segmental lining both for machine propulsion and ground support. This arrangement allowed for better alignment control and for a variety of different shield arrangements including the use of compressed air. In 1975 MTI was given the Queen’s Award for its outstanding achievement in small-diameter tunnel innovation.
Up until the 1970s almost all tunnels, even the smaller diameters (except for auger bores) required an operator at the face. 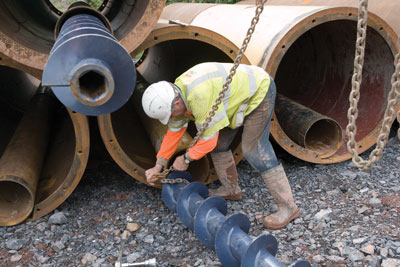 Beginning in the 1970s, however, remotely controlled “microtunneling” machines began to be introduced. Since necessity is the mother of invention, it appears that the Japanese company Iseki Microtunneling became the first to utilize remotely controlled slurry face tunneling machines for the installation of utility lines in poor soil conditions. Japan at that time was in need of an enormous quantity of water infrastructure in poor soil conditions and in areas with extreme population densities. Hence, all of those factors led to the introduction of tunneling machines that could install small diameter pipes with minimal environmental and community impact.

In 1981 Iseki introduced the “off-set” rotary crushing head for processing cobble and boulders and opened an office in Great Britain that helped introduce microtunneling throughout Europe. Iseki was also at the forefront of using jacked pipe arch roofs to stabilize large openings.

It is beyond the scope of this paper to discuss all of the early developments of slurry face and earth pressure balance TBMs, but both of those concepts are ideally suited to small-diameter tunnels with jacked pipe linings that serve as a “continuous” bulkhead to resist the earth and water pressures created at the face of excavation. Taken together these concepts resulted in the “microtunneling” industry that consists primarily of small-diameter tunnels operated remotely from the ground surface. 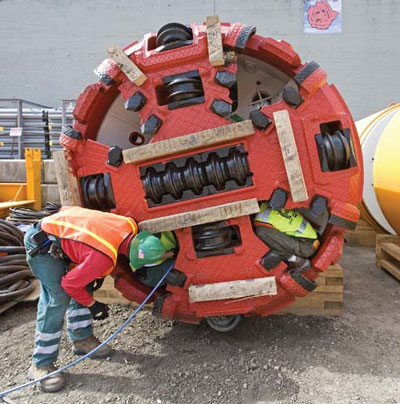 Small-diameter tunneling technology has improved over the years. This machine completed a 3,000-ft bore in Portland, Oregon, in 2008.

Beginning in the late 1970s, the underground construction industry has produced ever more sophisticated procedures for excavating the ground, controlling the ground during excavation, and operating all of the equipment from a control station at the ground surface. (I guess this could be characterized as the tunneling industry’s early concept for a “drone”!) With time, numerous additional innovations have been introduced that allow longer tunnels in more difficult ground conditions including curved tunnels.

The article would not be complete without a brief discussion of small-diameter tunnels in rock. Almost all small-diameter tunnels in hard rock prior to the 1970s were constructed by drilling and blasting to dimensions that were required by the workers to access the face and remove the blasted rock. Beginning in the early 1970s, however, several manufacturers began to develop mechanized procedures for excavating small diameter tunnels in rock. In 1971, Atlas Copco produced the mini full-facer, which consisted of one large rotating cutter that moved up and down across the face resulting in a tunnel with a curved roof and vertical sidewalls. This machine was used for many tunnels throughout the world, including a 7,900-ft long tunnel in 1980 that was reported to be the longest small bore rock tunnel constructed to that time.

In 1977, the Jarva Corp. produced a truly circular, full-face TBM rock coring machine that was used successfully for a 4,400-ft long tunnel in Davenport, Iowa. This machine served as the prototype for numerous other small-diameter TBMs produced by Robbins, Wirth, Calweld and Iseki during the 1980s. 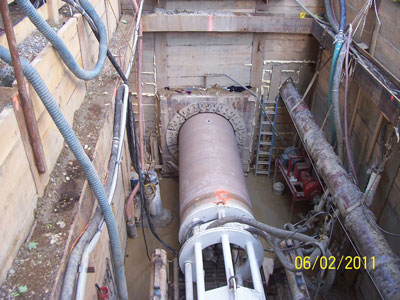 I would like to conclude this article with reference to an article that I wrote for Trenchless Technology in 1996 entitled ‘Microtunneling! Schmicrotunneling!’ wherein I emphasized the importance of accurately characterizing ground conditions for all sizes of tunnels. The enormous number and variety of small-diameter tunneling machines on the market today leads some designers and contractors to utilize TBMs that are simply not suitable for certain ground conditions. In the final analysis the ground is the boss! For every tunneling project, no matter how large or small, you must accurately characterize the ground and then carefully select the machine and the method most appropriate for that ground condition. No amount of mechanical sophistication can replace this most basic tenet for all successful tunneling projects.