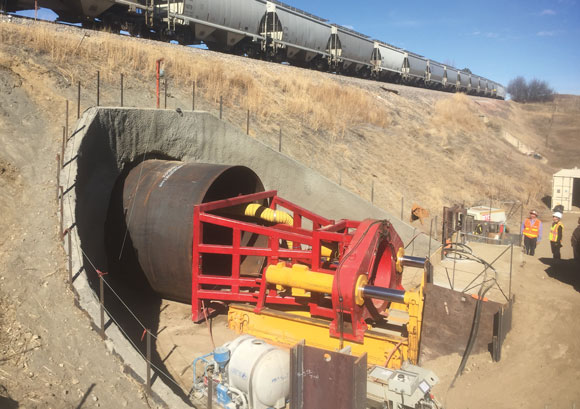 Despite the short length of the tunnel, the City overcame many challenges, including stringent railroad requirements, low cover and unpredictable ground conditions.

Colorado residents are known for their love of the great outdoors. With the Rocky Mountains as a rugged and scenic backdrop, popular activities include skiing, climbing, hiking and biking. To help keep pace with popular demand, the City of Fort Collins, located some 60 miles north of Denver on the front steps of the Rockies, is in the process of building out its system of hiking and biking trails.

Recently, the City completed construction of a tunnel underneath Burlington Northern Santa Fe (BNSF) Railway tracks that will ultimately connect more than 30 miles of trails. Despite the short length of the tunnel – less than 70 feet – the City overcame many challenges in the successful completion of the project, including stringent railroad requirements, low cover and unpredictable ground conditions. 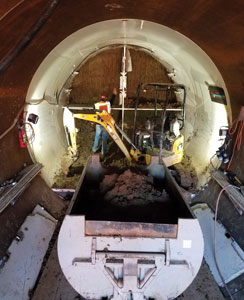 BT Construction used a custom-made shield, 14 feet in diameter, with breasting plates and a mini-excavator near the face to assist with excavation and loading the muck box.

As the idea of extending the Fossil Creek Trail across the active BNSF tracks began to gain momentum, tunneling quickly emerged as the preferred option. The railroad does not allow at-grade crossings, and due to the elevated nature of the tracks in the area of the proposed trail – 25 feet from the shoulders to the top of track – an aerial crossing was impractical. Additionally, BNSF would not allow for traffic disruption, so an open-cut undercrossing was ruled out.

Once the tunneling option became evident, City of Fort Collins Utilities (Utilities) used its Alternative Product Delivery System (APDS) contracting approach to bring in its on-call tunneling experts: BT Construction (contractor) and Lithos Engineering (design engineer). Many of the same team worked together on the recent Michigan Ditch Tunnel for the City using the same contracting method. Interestingly, the APDS method had been used exclusively by Utilities and was adopted by the Parks division for the Fossil Creek project.

The City of Fort Collins Utilities Division retains a group of prequalified contractors and consultants on an annual contract basis – known as master service agreements – and when a project is needed, Utilities can call on its team of service providers with expertise in a particular area to negotiate a contract. This allows quick assembly of a project team from start to finish.

“Because the Fossil Creek Trail project was a high-risk project and unique even from a tunneling perspective, it was well-suited for using APDS,” said Jason Stutzman, project manager for Utilities. “Eventually we were given permission to pursue the project using APDS and we were able to bring in BT Construction and Lithos Engineering, who specialize in boring and tunneling.”

Initial concepts called for a longer tunnel with cast-in-place concrete portals, an approach that would require fill to be imported. The design team came up with an alternate scheme to use secant pile walls closer to the railroad right of way that would shorten the tunnel length. One of the design requirements, based on American Railway Engineering and Maintenance-of-Way Association (AREMA) standards, prohibits horizontal shoring. Ultimately, the design team created a brand new concept – an arched wall constructed of sheet piles for initial support, followed by the construction of steel-reinforced shotcrete walls. This concept allowed a more constructible design, while reducing the tunnel alignment to 70 feet and further reducing risk. 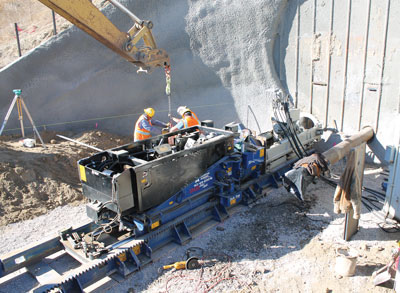 “The project was interesting in that it started as a tunnel project with a couple of walls, and it morphed into a wall project with a tunnel connecting them,” said Robin Dornfest of Lithos Engineering. “The wall ended up being a much larger part of the project than anyone anticipated but ultimately it enabled us to cut the tunnel down to 70 feet and lower potential tunneling risks, even though this approach had not been used elsewhere to our knowledge. Additionally, the shorter tunnel is more aesthetically pleasing when finished, and reduces the need for lighting and drainage utilities.”

Yenter Companies was contracted to build the wall. After sheet piles were installed in a semi-circle as initial support, two layers of rebar were attached and shotcrete was applied. The ends of the semi-circle were keyed into drilled shafts installed by Anderson Drilling, which also built shafts for the thrust wall.

“The arched walls transfer lateral earth and surcharge pressures horizontally through compressive thrust, to 48-inch diameter, reinforced drilled shafts constructed at the corner of each wall. The unique wall geometry and decreased underpass length provided a significant cost savings to the City of Fort Collins. The arched walls were designed to limit deep, large foundation elements and lateral support extending into the railroad embankment. The walls were constructed top-down in four lifts and include two reinforcing mats consisting of #8 vertical rebar and #5 horizontal rebar spaced at 12 and 6 inches, respectively,” Dornfest said.

Prior to the start of tunneling, there was concern that the alignment might encounter wooden trestles that supported the railroad. Fortunately, no trestles were encountered but the alignment did pass through what used to be a brick manufacturing facility, and bricks were encountered during test borings. As crews tunneled into the alignment, a layer of bricks was found, which led to concerns that the presence of the bricks may contribute to an unstable tunnel face and related ground settlement, but crews were able to maintain the ground.

To tunnel, BT Construction used a custom-made shield, 14 feet in diameter, with breasting plates and a mini-excavator near the face to assist with excavation and loading the muck box. At the end of each shift, crews closed the breasting plates to minimize settlement potential overnight.

The shield was jacked using a Herrenknecht jacking frame powered by a modified Akkerman hydraulic system. The jacking system was capable of 2 million pounds of thrust, but crews maintained a deliberate pace to help minimize settlement and avoid a possible blowout of the embankment.

To help maintain line and grade, crews used an Akkerman guided boring machine (GBM) to drill twin 12-inch tunnels, back filled with concrete, to serve as guiderails for the 14-foot diameter shield. The guiderails, built at the 5 o’clock and 7 o’clock positions on the profile, extended 10 feet into the launch pit and the 8-foot lengths of 1.25-inch thick steel pipe, custom fabricated by Pipe Industries Inc., were placed on top.

“The shorter tunnel alignment helped in building a 14-foot diameter tunnel because, at that size, your jacking pressures can increase dramatically the farther you go,” said John Beckos, project manager for BT Construction.

As tunneling began, a survey crew was employed to monitor settlement along the tracks. Contact grouting was performed from inside the tunnel to help minimize ground movement. In the end, there was minor settlement but railroad traffic was able to continue unimpeded and tracks were remediated following tunnel construction. 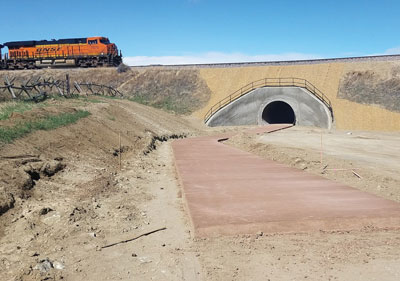 The APDS method was credited as a key to success. The collaborative planning, design and build approach led to a more constructible, lower risk project, while costs were kept in check despite a longer-than-anticipated approval and construction oversite process with the railroad.

“Overall the project was fantastic,” Stutzman said. “We ended up below our $2.9 million cost projection despite a changing schedule that pushed us back into the winter. The finished product turned out really well and the public is excited about the trail opening.”

The project began in summer 2016 with the construction of an access road to the jobsite. Arch wall and thrust block construction followed. Tunneling began in January 2017 and the project was successfully completed on time and on budget in April 2017.