Microtunneling has been used in the United States since the mid-1980s as a means of trenchless pipe installation. In the ensuing years, it has become commonplace for design engineers to specify vertical and horizontal tolerances of +/- 1 in. for pipe installed using the microtunneling process. However, completing a project within these narrow tolerances is often difficult, and sometimes impossible, to achieve. This standard appears to consider only guidance system accuracy without taking into account other factors affecting the accuracy of the microtunneling installation process.

In addition, as microtunneling has gained popularity over the last two decades, engineers have been using the process to install more challenging projects. The pipe diameters (and thus the microtunneling machine weights) as well as the drive lengths have increased, and mixed face/mixed reach conditions are no longer considered ìtaboo.î In the meantime, the accuracy of the guidance system technology has remained essentially unchanged. This has dramatically increased project risk and the likelihood that the design alignment and grade may not be achieved.
Several factors affect the accuracy of the microtunneling process and should be considered in the determination of a reasonable installation tolerance. These are:

Pipe
Traditional pipe options for microtunneling are: reinforced concrete pipe (RCP), centrifugally cast fiberglass reinforced plastic pipe (CCFRPP), vitrified clay pipe (VCP), polymer concrete pipe (PCP) and steel pipe. The first four are well suited to serve as the product pipe while in most cases steel is used as a casing pipe for a two-pass system. As with most manufacturing processes, there is no absolute dimension for the finished product. Instead, industry accepted standards published by ASTM and ASCE control the pipe fabrication process and provide dimensional tolerances for each manufacturer to meet.

All of these standards provide fabrication variances that increase as the pipe diameters increase. For discussion purposes, letís look at a typical 48-in. ID pipe. The following table lists the allowable ID variance in the four direct jack pipe material options and illustrates how even conforming pipe can ìuse upî the majority of the permitted installation tolerance.

Geology
As the microtunneling industry matures, it is being applied to ever more challenging geotechnical/subsurface conditions. These include:
Mixed Face Conditions: where two dissimilar soil strata are encountered by the cutting wheel at the same time. Over-excavation may occur in the weaker strata as the MTBM struggles to mine through the harder layer. Also the MTBM will tend to follow the path of least resistance into the weaker strata. 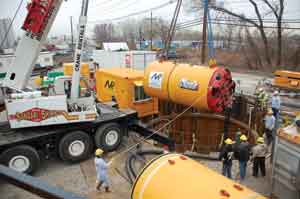 Mixed Reach Conditions: where two dissimilar soil strata are encountered by the cutting wheel one after another without being immediately known to the operator. This can lead to steering deviations as the MTBM operator masters the new soil condition.
Weak Soils: where the in-situ soils may not have sufficient bearing capacity to support the microtunneling machine or permit effective steering.
Soils Underlain by Bedrock: sometimes the tunnel profile falls into a soil layer that is only a few feet above the bedrock. In these instances it is not uncommon to encounter a rise in the elevation of the soil/rock interface unanticipated by the geotechnical investigation. In this case the bedrock will push the MTBM up and likely beyond the design tolerances.

Boulders and Obstructions: microtunneling is being specified for use in soils with boulders and/or obstructions regardless of the size of the pipe. The result is that the MTBM may not have enough torque or weight to either cut the boulder/obstruction or resist being deflected from the design alignment and grade.

Rock: microtunneling through weathered rock often presents similar results to mixed face/mixed reach or even soil underlain by bedrock conditions. Microtunneling through competent rock may result in pipe wedging caused by rock cuttings bypassing the cutterhead. This can deflect the pipe from the design profile.

It is important to note that in any of these situations where the MTBM is being shoved off line or grade, the last thing the operator should do is make an abrupt counter-steer. The machine operator must make minor adjustments until the MTBM is gradually brought back to the design line and grade.

Overcut
In order to permit MTBM steering and to lubricate the pipe string, a microtunneling machine excavates a hole that is slightly larger than the outside diameter of the pipe being installed. The size of this overcut is based on the soilís characteristics and will range from 1/2 to 3/4 in. on the radius in soil to greater than 1 in. in rock.

For this discussion, the question is: ìWhere is the final resting place of the pipe string within the mined tunnel?î Does it settle to the bottom and follow the mined invert? Does it float to the top because of buoyancy induced by the bentonite slurry? Does it find the straightest line possible through the excavation? Does it move during the placement of the contact grout? These unknowns add uncertainty to the as-built location of the pipe.

Guidance System
There are limitations to the accuracy of microtunneling guidance systems. It is generally accepted that they are capable of accurately reporting the location of the target in the rear of the MTBM to within +/- 1 in. However the laser beam is diffused in longer drives and it can be refracted due to temperature variations within the pipe string, especially when power packs are installed in the MTBM, so the accuracy decreases as the drive length increases.

While the vertical accuracy is determined by the electronic grade control of a properly calibrated laser, the horizontal accuracy is determined by manual ìchecksî of the laser beam alignment using string and plumb bobs. The horizontal alignment is difficult to consistently recreate given that the shaft is very short in relation to the length of the drive. For example, a small variation in the laser alignment check in a 25-ft shaft will result in a 40 times larger variation at the end of a 1,000-lf drive. A 1/8-in. differential, resulting from being 1/16 in. left of one mark and 1/16 in. right of the other mark, will generate a 5-in. lateral shift in a 1,000-lf drive.

Because all of these factors must be considered, a practical installation tolerance can be expressed as the sum of reasonable allowances for each of these factors and could be as high as +/- 3 to 4 in. on grade and +/- 6 in. on alignment. And while this approach ignores the concept of offsetting tolerances (which may be more indicative of real world construction), it is done to illustrate the fact that extreme situations are possible and may occur even if the microtunneling contractor has done his job properly.

So what is an Engineer to do?

Understand what microtunneling can and canít do. It is important to respect the limitations of the process as they apply to your project.
Balance the functional needs of the project with the constructability challenges by separating desirable aspects of a project from necessary ones.
Consider a two-pass system rather than a single-pass system to allow the product pipe to be installed to a tight tolerance even when the geology wonít allow the casing pipe to be installed to that same tolerance.

Specify ground improvement if grade is critical and geotechnical conditions are not well-suited for microtunneling. Do not leave it to the microtunneling contractor to ìsolve the problem.î Acknowledge the problem, design the solution, and provide a mechanism to pay for it. Recognize that in a competitive market, the prudent microtunnel contractor will not be low bidder if forced to add solutions that less experienced or more aggressive contractors do not.

Permit the installation of an oversized pipe and allow the contractor to construct a new invert within the pipe at the design elevations to achieve the necessary hydraulic profile.

Consider pre-qualifying contractors, especially on more challenging projects where installation tolerances must be tight in order for the system to function.

Where possible design the drives with steeper slopes. This will allow a wider vertical tolerance.

It is the engineerís duty to design a constructible project that an experienced contractor can build using ìstandard of the industryî skills and equipment. Given current pipe fabrication standards, the inherent variability of the ground, increasing pipe sizes, and the limits of the guidance system, in most instances the commonplace +/- 1 in. installation tolerance is an unrealistic expectation of what a contractor can build.

A further consideration is cost. Engineers should include reasonable tolerances in the project specifications that are project specific and based on the engineering needs of the system. When installation tolerances are impractical, the risk of not achieving those tolerances goes up. This increases the likelihood of extra costs and thus claims and lawsuits. Without practical tolerances bid prices will be artificially high, especially from experienced contractors who fairly price risk.

It is clearly better for all parties – Owner, Contractor and Engineer – to have project specifications that include achievable installation tolerances.

This article was written by Richard A. Palmer, P.E., on behalf of the North American Microtunneling Association (NAMA). Palmer is the tunneling manager for Northeast Remsco Construction Inc. and is a member of the board of directors of NAMA.