You are at:Home»Featured Stories»Tackling a “Perfect Storm” of Monitoring Challenges 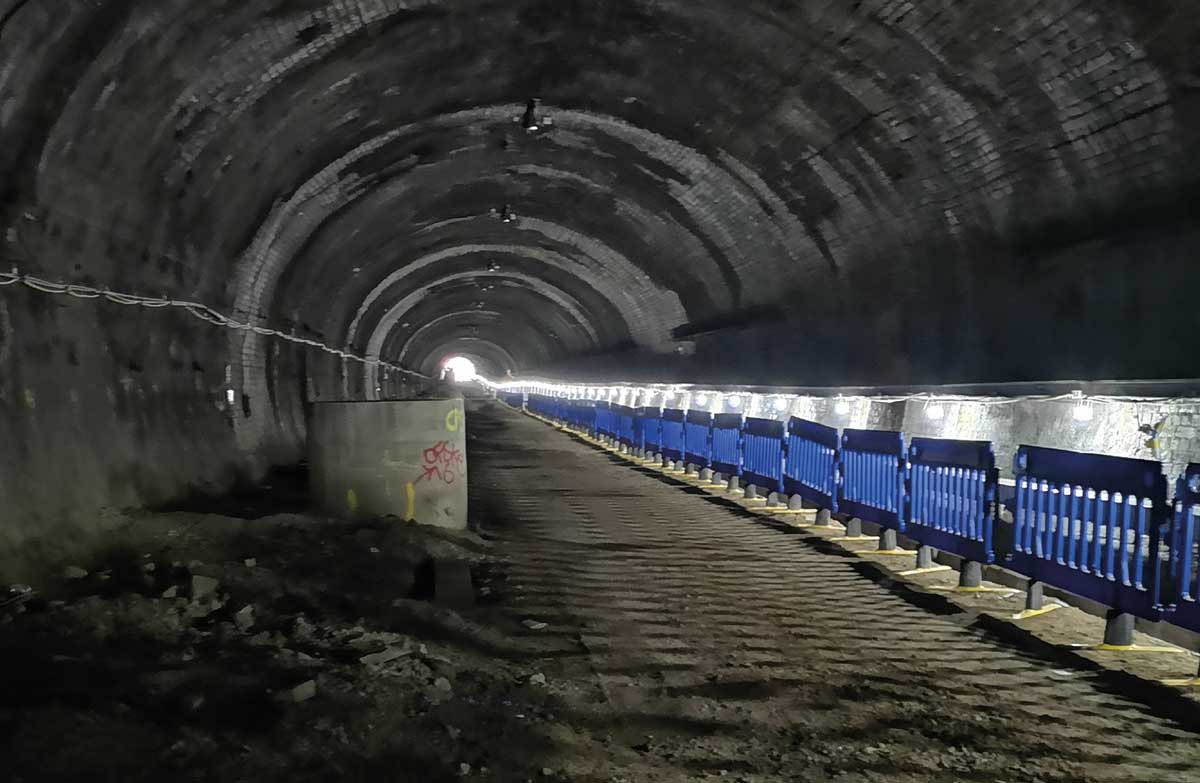 As the railway infrastructure in Great Britain ages, it is being stretched to cope with more and more use. Degradation of this infrastructure was particularly evident during restoration work on and around the 19th century Gasworks Tunnel in central London. Less than a third of a mile (500m) from the King’s Cross railway station, this tunnel has two operational bores that carry the East Coast Main Line and a third non-operational bore.

In August 2019, the Central Rail Systems Alliance began excavating more than 24 million pounds of material from the tunnel’s closed eastern bore in preparation for reopening it as part of a master plan to ease pressure on the rail traffic in and out of King’s Cross.

Responsible for undertaking the monitoring work during the 12-month project was Amey Consulting and Andrew Plumb, Amey’s Head of Monitoring and Senior Technology and Innovation Manager.

The total station approach proved to be the most feasible as it provides reliable 3D data on tunnel movement and can be programmed to take measurements every few minutes.

Understanding how much a tunnel moves, particularly in an older asset where less is known about how it will react to construction work, presented an immediate set of challenges:

An additional challenge came from an active third-party construction site with piling and excavation taking place directly above the eastern bore. This created several conditions that limited the number of systems capable of recording movement data in absolute form, at regular intervals, day and night, and without requiring a work crew on site in order to maximize safety. 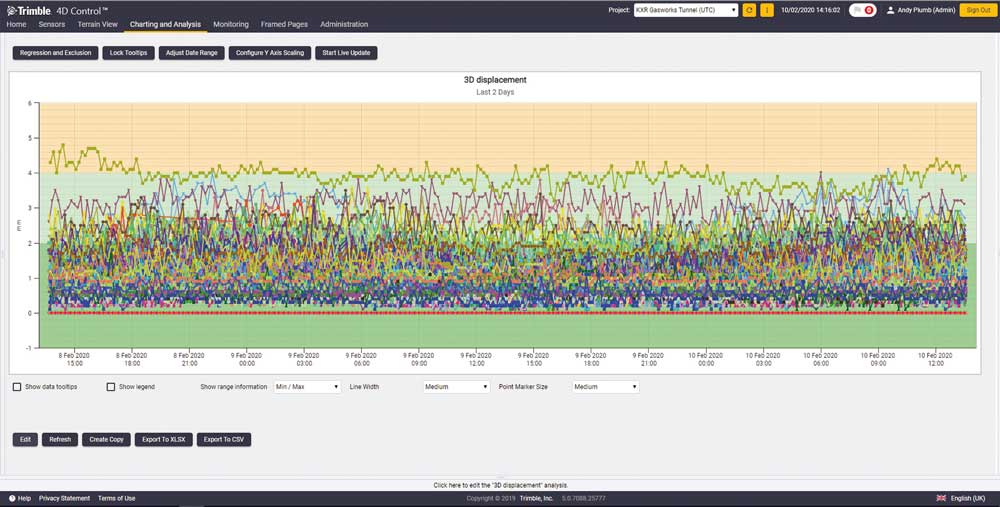 Collected monitoring data was processed automatically in the T4D software.

Following a 3D Finite Element Analysis (FEA) conducted by Amey Consulting, it was decided that trigger levels should be set for movements of the tunnel in accordance with its results: green (just over inch or less than 4mm), yellow (between ⅛ – ¼ inch or 4 – 7mm) and red (above ¼ inch or 7mm).

Two systems were presented by Amey Consulting to Network Rail, one based on tilt sensors and one on a total station approach. The total station approach proved to be the most feasible as it provides reliable 3D data on tunnel movement and can be programmed to take measurements every few minutes.

Needing fast procurement of a reliable system that would be backed up by dedicated technical support and advice, Plumb approached KOREC’s monitoring specialists who confirmed his team’s assessment. Working together, a Trimble monitoring system was selected and installed.

KOREC, a Trimble distributor for the UK and Ireland, recommended using five high-accuracy Trimble S5 Ti-M monitoring total stations with communications supported by five Trimble Settop M1s placed in reinforced cabinets. M1s are robust Trimble communication hubs that combine the functionality of a field computer, device server, router and remote switch, streamlining the number of components needed for this monitoring task. However, because there was no phone signal in the tunnel, Plumb designed and specified an alternative method for the communications connection. An OctoHub was used to connect the M1 to a modem via fiber optic cable rather than the usual internal M1 SIM card. This provided a fast, robust and efficient data transfer to a 4G gateway at the south portal and in turn to the internet and Trimble 4D Control (T4D) monitoring software.

Inside the tunnel, the total stations were positioned and installed by KOREC along with 150 toughened glass prisms placed in arrays throughout the tunnel alongside a network of reference prisms to coordinate all movement to data control points.

Collected monitoring data was processed automatically in the T4D software, which Amey Consulting also used to display results, output operational and management reports, and to manage alerts, alarms, web access and email notifications. This enabled multiple stakeholders to gain access to historic and live data in real-time, understand trends and most importantly, see the effect of construction activity on the tunnel. Data was also extracted into Amey Consulting’s own geotechnical software.

Safety as a top priority

Plumb reported that the total stations were functioning well, achieving millimeter accuracy. Data was recorded every 15 minutes, 24/7 providing valuable insights into tunnel behavior, above and beyond anything they could have learned by monitoring in a traditional (or manual) way. The system proved to be a cost-effective yet sophisticated high-end solution, measuring data reliably and robustly, and providing reassurance for the site personnel that the tunnel was reacting in a manner that was within safe engineering tolerances.

By installing this innovative automated monitoring system, Amey Consulting removed all “boots on ballast” during the construction phase of the project. Elevating project safety to this level and being able to keep work crews out of the tunnel during construction, the asset owner, Network Rail, was assured the tunnel as a whole (eastern, central and western bores) was structurally sound and safe for the travelling public.