You are at:Home»News»TERRATEC TBM Sets New Standard in Istanbul 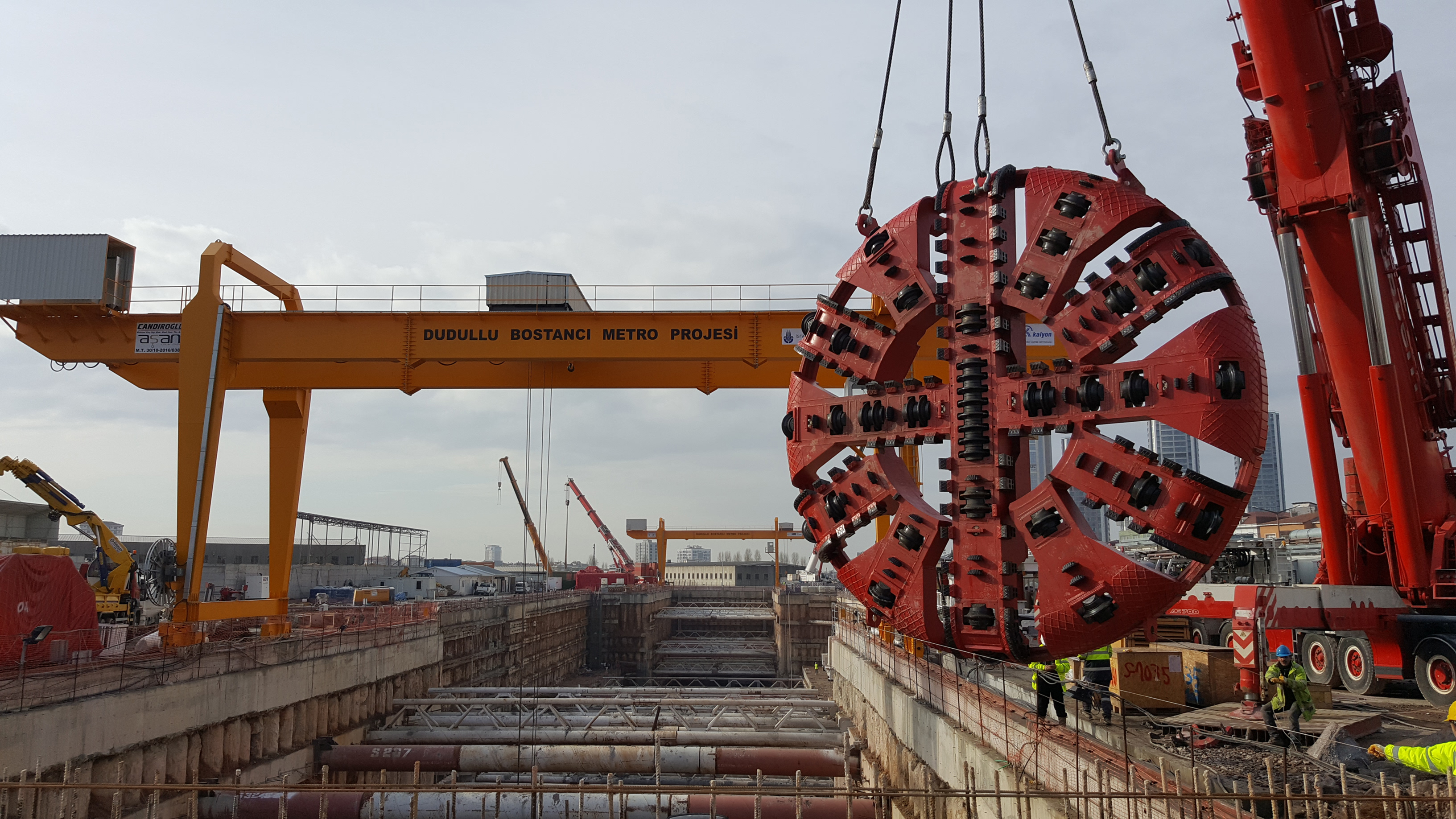 At 7 .a.m., on March 3, 2018, one of two TERRATEC 6.56-m diameter earth pressure balance tunnel boring machines (EPBMs) employed on the Dudullu-Bostancı Metro Line project, in Istanbul, Turkey, completed an advance of 19 rings in a single shift. Equating to 26.6 m of excavation in just 12 hours, the TBM worked non-stop – alternating between 20-minute mining and ring building cycles – to accomplish a new production record for a TBM of this size and class in Istanbul.

The TERRATEC TBMs are being used by the Şenbay Madencilik-Kolin-Kalyon joint venture (SKK JV) – along with two other machines – on the Dudullu-Bostancı Metro Line, which runs approximately north to south under the densely-populated Anatolian side of the city. The 14.2-km long line, along with its 13 new stations, is located entirely underground at an average depth of about 30 m.

The robust TERRATEC TBMs have versatile mixed-face dome-style cutterheads with an opening ratio of about 35% that have proven to work extremely effectively in Istanbul’s mixed geology – which includes sandstones, siltstones, limestones and shales – as well as other state-of-the-art features such as VFD electric cutterhead drives, tungsten carbide soft ground cutting tools that are interchangeable with 17-in. roller disc cutters, high torque screw conveyors and active articulation systems.

Assembly of the TERRATEC S50 and S51 machines took place at the project’s central shaft site at Kayışdağı station in February 2017. By early March, the S50 machine had been launched on its 3,980-m journey south-west to Içerenköy station and shortly thereafter the S51 machine began mining north-east on its 4,377-m drive toward Türk-iş Blokları station. Once the TBMs’ conveyor systems had been fully installed, the machines quickly got up to speed and have maintained consistent advance rates since then.

As the TBMs have progressed, they have been installing a tunnel lining consisting of reinforced concrete trapezoidal segments (5+1), with an outer diameter of 6,300 mm, an inner diameter of 5,700 mm and a width of 1,400 mm. These are being produced by SKK JV at its factory in Ferhafpasa, which is located about 10 km from the project worksite.

The achievement of such successful TBM production rates in such a densely populated area of the city, with minimal room on site for segment or muck storage, is testament to the project team and on-site logistics:
“While planning the logistics and TBM supply, we had to consider the traffic in Istanbul,” says Enver Koc, Chief Tunnel Mechanical Engineer for SKK JV. “Traffic jams are inevitable in a city of 17 million people. So, with the need for on-time segment delivery and muck removal from site, 70 percent of our operations are performed during the night shift.”

The record-breaking 19-ring shift was completed by the S51 machine, which has currently mined about 75% of its alignment and is due to reach its final destination this June. Slightly ahead of its sister machine, the S50 TBM is due to complete its final drive for the project in early April.

“This is our first experience of working with TERRATEC,” says Koc. “We heard the company name only a few years ago and at that time the Turkish market was dominated by other TBM manufacturers, but now TERRATEC is mentioned all the time due to the good performance. Our TBM operators adapted to the machines very quickly and TERRATEC has been on hand to provide quick solutions whenever we need them. We would absolutely prefer to use TERRATEC machines again in the future.”

Due for completion in 2019, the new lines will increase the city’s current 145 km Metro network to more than 480 km.