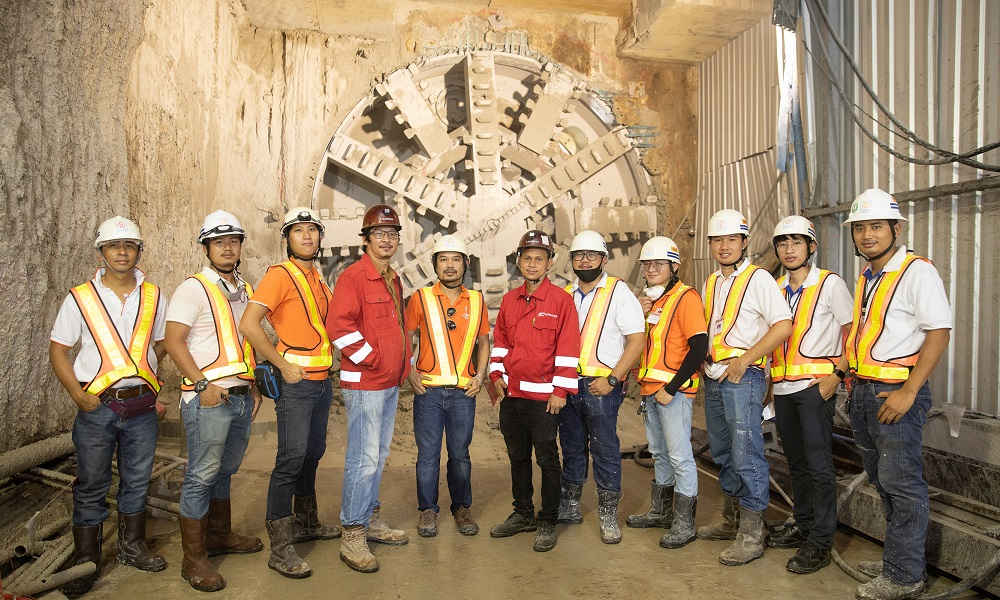 TERRATEC celebrated on the completion of the Orange Line metro project in Bangkok, Thailand, with the final breakthrough of the Eastbound tunnel on Contract E3.

Contract E3, which was awarded to ITD in May 2017, totals over 6km of TBM driven tunnel and three underground stations, extending from Khlong Ban Ma to Hua Mak. After completing the Westbound tunnel on Jan. 20, 2020, with the best month ever in Thailand with progress of 663.4m, TERRATEC S70 machine began mining eastwards from the Khlong Ban Ma station box on April 26, 2020, and quickly got up to speed following its initial drive. By mid-June 2020, the TBM was achieving the best rates of 33 rings per day (46.2m/day – another best ever advance rate per day) and had already undertaken its first intermediate breakthrough.

In March 2020, The Westbound tunnel breakthrough on Contract E3 took place a full month ahead of schedule. The Eastbound tunnel breakthrough on Contract E3 was achieved 118 days ahead of schedule.
TERRATEC S70 TBM was designed to tackle the variable soft ground geology of the city – which ranges from soft and medium to stiff and very stiff clays, with lenses of dense sand and the potential for high-pressure groundwater inflows – as well as the need to mine through numerous diaphragm wall shafts and potentially, concrete piles.

In order to handle these challenging conditions, the TBM’s soft ground cutterhead features a spoke style and the addition of back-loading knife bits to assist the break-in and break-out of the shafts. In addition, the machine is fitted with an active bentonite face support injection system and double-gated screw, to ensure face stability and mitigate settlement during excavation in areas of flowing sands and high groundwater pressure.

As the machine progresses along the alignment, it has been installing a precast concrete segmental lining consisting of five x 1400mm wide Universal style segments plus key, with an internal diameter of 5.7m. These are being produced by ITD at the same factory used for segment manufacture during its MRT Blue Line underground works contract five years ago, which also employed a TERRATEC TBM.

In total, TBM tunneling operations for ITD’s Orange Line (East) contract has lasted two years and are being assisted at all times by TERRATEC’s highly-experienced Field Service staff – whose quality after sales support service has created very loyal client-base in Thailand – to ensure optimum performance and successful project completion.

Bangkok’s new Orange Line will eventually total about 35.9km with 26.2km aligned underground with 22 underground stations and another 9km and seven stations on elevated structures. The line is scheduled to open in March 2024. When complete, the Orange Line will provide a vital transportation link from Bangkok’s city center to districts in the east, reducing traffic congestion and paving the way for improved accessibility, economic growth and new residential and commercial opportunities along the alignment.

A video of the TERRATEC S70 TBM breaking through on Bangkok Orange Line can be found here.