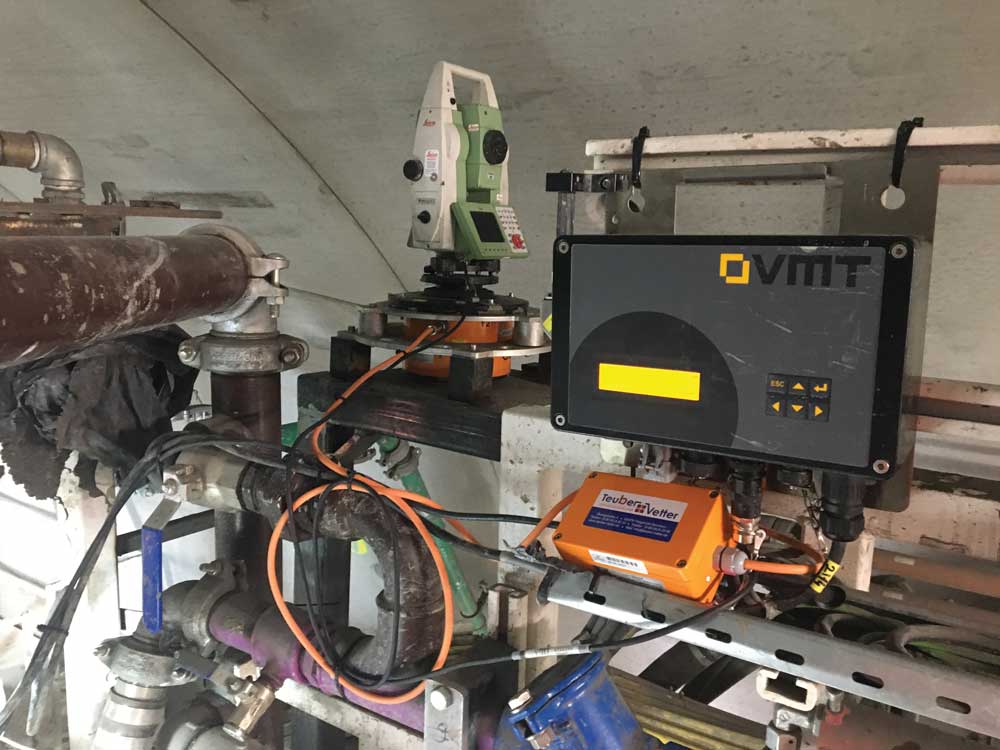 Hard wired cables at the moving station. But easy to switch back to the standard TBM laser system, with the total station mounted on the tunnel wall

For over 160 years London, UK has been served well by the underground sewers constructed by Sir Joseph Bazalgette after The Great Stink of 1858. Although these brick-built sewers are still in good condition, over the years the growth in population to some 16 million has simply overwhelmed the system.

To alleviate this problem there is currently a new “Supersewer” known as the Thames Tideway under construction, one of the largest utility installations currently underway in the U.K.

The installation of the new sewer means that excess flows currently diverting into the River Thames will be collected and transferred to a treatment plant before cleaned effluent is discharged into the environment.

After approval for the scheme in 2014, construction started in 2016, with tunneling works for the new sewer commencing in 2018. The plan is to complete the tunneling works in 2023 with all testing and commissioning works being finalised and the sewer in operation by 2025. 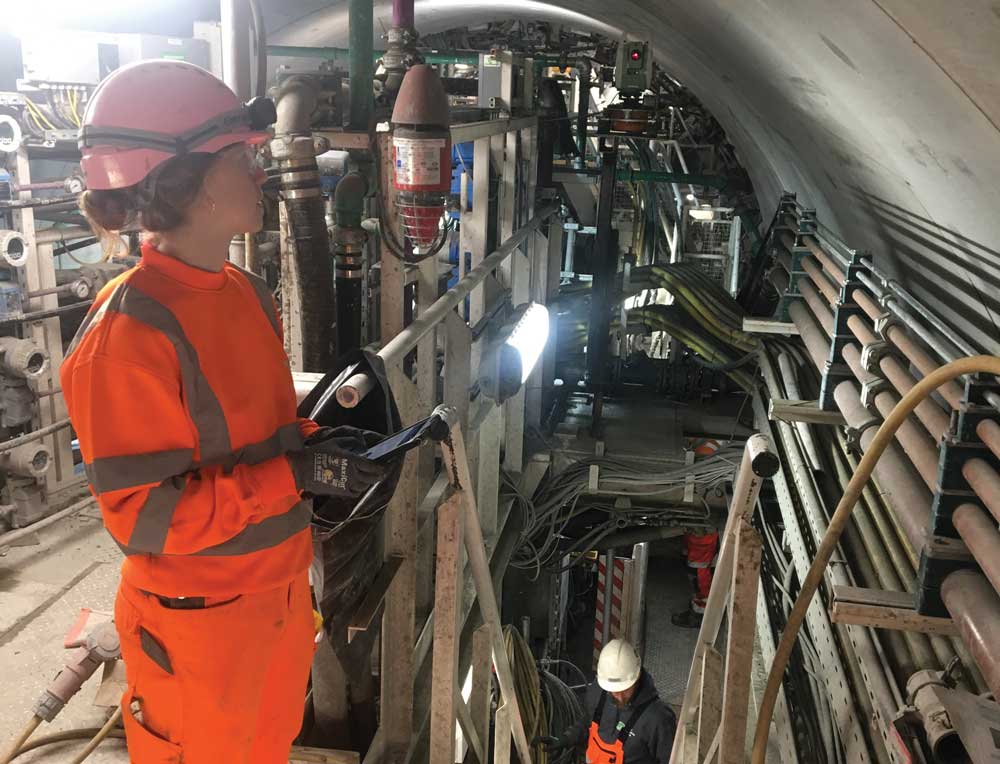 TBM Engineer Christina using the total station joystick function on the TUNIS.app to determine a new backsight prism for the moving station

Over the course of the tunnelling works, six TBMs will excavate the Tideway sewer and two smaller connecting tunnels. Tunneling is being undertaken 24 hours per day and at the time of writing three of the six planned tunneling sections have been completed. Once completed, tunnels are to be secondary lined to ensure water-tightness.

As part of the tunneling works, Herrenknecht has provided one large diameter, EPB-type TBM for the construction of the Tideway Tunnel section designated Thames Tideway West C405. This section runs from Acton to Wandsworth over a length of 6,942 m using a TBM of outside diameter 8,100 mm, which allows for the installation of the secondary lining to bring the sewer to its operational diameter of 7.2 m. The contractor for this section of the project is BMB JV.

With the tunneling being affected for use as a gravity sewer, the line and level of the route are vital to the success of the installation over the whole project.

For this particular section, specialist guidance system designer and manufacturer VMT (based in Bruchsal, Germany) provided several tunneling support systems to guide and aid the TBM through its challenging route.

Tunneling works on this section started on April 26, 2019, with breakthrough on September 24, 2020. The customer was satisfied with the breakthrough accuracy.

\Supporting and simplifying the surveyor and TBM engineers’ day-to-day activities was the latest development from VMT’s navigation range, the TUnIS.moving station. The TUnIS.moving station determines and calculates all data and information that is necessary for navigating the TBM along a tunnel axis. The high information content of the data displayed ensures optimum control of the machine position, thus helping to maintain a uniform shield run with minimal deviations from the desired route. The position and tendencies are continuously displayed to the shield operator, allowing vertical or horizontal curves to be easily and precisely controlled.

This new system undertook its earliest and very effective trials on the London Tideway Tunnel, in parallel with the initial primary navigation system (which was also provided by VMT). The trials were so successful that the tunneling operation was moved onto the new TUnIS.moving station system, replacing the primary VMT standard navigation system for 560 m of the advance.

Also tested on the site was the new SLuM.Connect hardware central box, as part of the existing automatic tailskin clearance measurement system, SLuM Ultra. The ring build is a decisive part of mechanized tunneling with segmental lining. To determine the optimal installation of the ring it is necessary to observe the current position and orientation of the TBM, plus the position of the last built ring. SLuM Ultra enhances the ring build process by measuring the reference ring position relative to tail-skin axis with millimeter-accuracy. The TUnIS.App was also widely used by site engineers and surveyors, allowing remote operation of the navigation system from outside the control cabin.

Roy Behrend, Chief Surveyor Tunnel for the BMB-Joint Venture on the project said: “Communication was really good with VMT and their site engineers for the testing and implementation of the new TUnIS.moving station system. There was always immediate ongoing support for VMT’s navigation systems and TUnIS software. Support was also available remotely. The TUnIS software package is well developed and its menu systems allow for ease of use. The system is very well supported by VMT. VMT Support Engineers also have remote access to the system which allows for easy system maintenance and testing. I would not hesitate to recommend or use VMT products again.”