You are at:Home»Featured Stories»The Link: A Belgian design-build firm integrates a new class of surveying instrument into tram-link tunnel construction 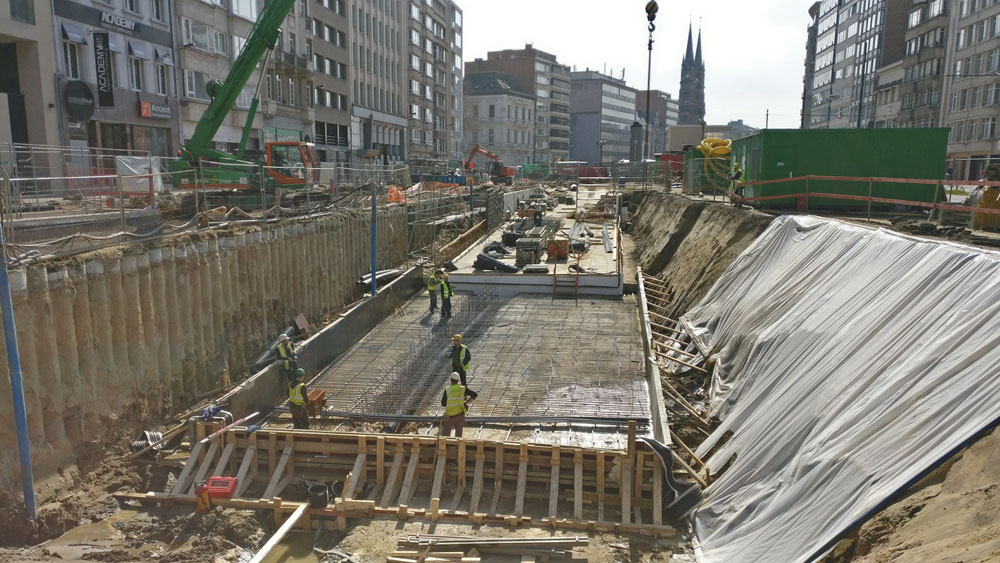 Like many cities, Antwerp, Belgium, has a long-term initiative underway to greatly reduce vehicular traffic and move existing traffic around and under the city center. The goal is to get more people to use bicycles, trams, rail and buses. One of the phases of this initiative is launching Antwerp’s new Noorderlijn tram line or “North Line,” a vital link to the recently revitalized Eilandje (“Island”) district, an area of docks and industrial tracts north of the city center which has been undergoing a development renaissance and now hosts a mix of residences, businesses, art installations and public spaces.

Named “Noorderlijn” (earlier referred to as “Brabo II”), the initiative includes road and rail projects. When it’s complete, Noorderlijn will extend the tram by about 6 km (4 miles) north, across the island to a park-and-ride at the interchange of a major expressway. BAM Contractors, the Belgian subsidiary of Royal BAM Group engineering and construction firm, is part of the tram consortium for Noorderlijn and will execute the project in a consistent digital environment. They’ve already built the tram line as well as two bridges and several tunnels. “Noorderlijn has a little bit of everything,” said BAM land surveyor Niels Balens.

The second largest city in Belgium, Antwerp is also the second busiest port in Europe and the 17th busiest port worldwide by cargo tonnage. Connected to the North Sea by the Westerschelde Estuary, its labyrinth of rivers and canals has made Antwerp a historically vital trade center diverse in both demographics and culture.

New construction and renovation can be a challenge in Antwerp. Its history, fortune and rulers have woven a rich tapestry of infrastructure, historic buildings, bastions, port facilities, road and rail throughout the city. One of the problems BAM Contractors faced was how to design in and around these structures.

“One section of the Noorderlaan went along a main road and under the road is what is called the Spanish Wall,” Balens said. Excavation revealed a section of well-preserved bastion, one of nine built around the city’s historic center during a period of Spanish rule. The Spanish Wall, completed in 1552, lies just below the surface, but preservation efforts have dictated that it must remain exposed, with an observation walkway overhead.

“The wall is being incorporated into the tram project,” Balens said. “We measured the wall and added this to the survey so the engineers could complete a design that would not negatively impact the wall.”

The Spanish Wall was not the only historic or existing structure that BAM Contractors had to incorporate into the design. The new tram line begins at Antwerp’s Opera Tram Station, which was constructed in the 1970s and has three levels, built to accommodate expansion of road traffic and tram lines. All new design and construction must interface with the existing elements of the building. The surveying of these complex elements was where the Trimble SX10, a new class of surveying instrument, was put to the test.

BAM Contractors was an early adopter of the SX10, a robotic total station and a fully functioning scanner released in October 2016. BAM recognized the instrument’s potential to solve engineering problems commonly encountered in multi-disciplined projects; scanning sections of the Opera Station was one of the SX10’s first tasks.

“The design was difficult because we started with old paper plans,” Balens said. “It was critical that we measure [as-built] the existing areas to give to the engineers. We measured before the design and during construction. There were scans done by another team, and this was a bit of a problem, so we took new measurements and scans with the SX10. The problem with the original scans was that they were not properly registered and were very large and difficult to work with.”

The SX10 is also a total station, resolving the project registration on the same instrument as the scans and images – no need for additional registration steps. In addition, as Balens explained, the scans from the SX10 are at a density more suitable for the engineers’ needs. He notes that in working with scans from the large dedicated scanners, they must lower the resolution to be useable. This solved the problems encountered with the unwieldy legacy scans and supported the engineers with new 3D data.

“We had to do a lot of small scans for different parts of the station,” said fellow BAM Contractor surveyor Johan Egerickx. “Opera Station has existing car tunnels to connect with parking, and there will be five new car tunnels for parking and to pass traffic through the area. The second level is an existing tram line, and Noorderlaan is on the third level. We built a tunnel from the third tunnel to the surface – about 400 m (1,300 ft). The engineers could not use the older scans, so they asked for new measurements in different parts of the station. We would set up the SX10 to perform a scan that was completely registered in resection. Because the scans and images were already registered, and at the resolution the engineers desire, we were able to deliver this immediately.” The team will also use the SX10 on the Spanish Wall and car tunnels. 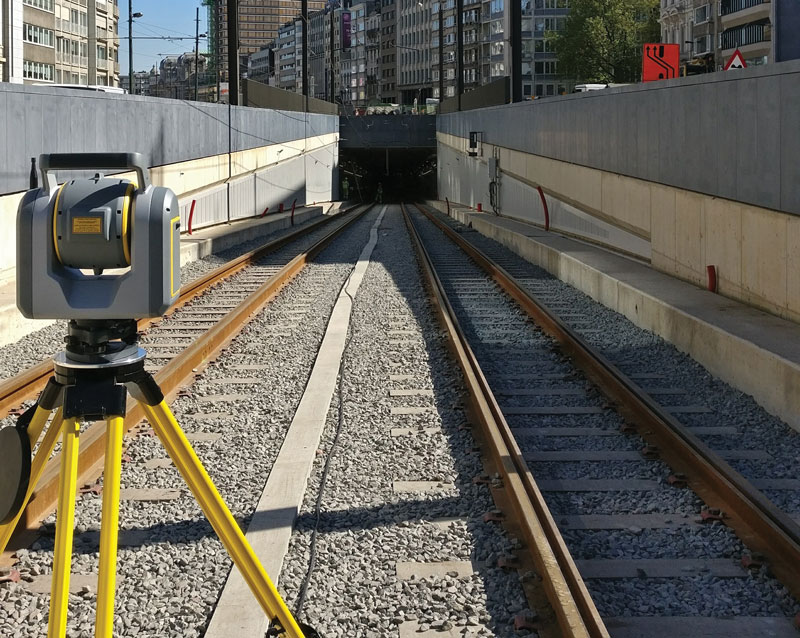 BAM Contractors was an early adopter of the Trimble SX10.

Adapting to the Workflow

Adapting the SX10 into the workflow also was not difficult, according to Balens. BAM Contractors’ surveyors had already been using Trimble Access field software with their total stations and GNSS rovers. In the office, they use Trimble Business Center (TBC), which has modules for handling the panoramic images and scans from the SX10 and integrating them with other survey data. This tight coupling of precise instrumentation and software has been integrated into many of BAM Contractors design-build projects, and especially on Noorderlijn.

“We started with GNSS survey control using the Belgian VRS network [FLEPOS],” said Egerickx “We used to set up a base, but now we just use the network. We even use it on machine control. Then we do a control traverse and digital level loops with our Trimble total stations and DiNi levels.

“This project had another first for us,” Egerickx added. “We did no staking for earthworks. Instead, our subcontractor, Aertssen, used machine control and Trimble equipment along with a digital 3D model of the design. This equipment was mainly GNSS, except around buildings where there isn’t much sky where we used total stations. The digital model made things go much faster.”

In addition to design and construction surveying, Egerickx performs weekly monitoring of the London Bridge, a replacement for an older bridge. “We put a permanent bolt on a stable rock outcrop near the bridge. There are six prisms on the bridge. Each week I mount the total station on the bolt and the monitoring module in Trimble Access on the TSC3 does the monitoring –automatically.”

Noorderlijn is the latest project in the Antwerp road and rail initiative and has brought BAM Contractors closer to a complete digital environment, especially with its first total adoption of machine control for earthworks and integration of the SX10 into their workflows. For BAM Contractors, this is a new and powerful link between conventional surveying and 3D field data collection.