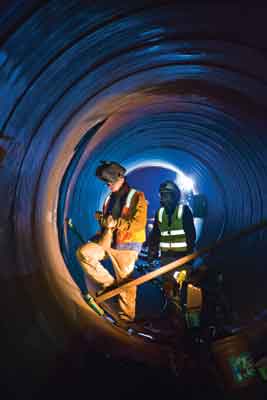 The excavated diameter is 15 ft with a bolted, gasketed, concrete liner with a 9-ft welded steel water carrier pipeline that was manufactured by Northwest Pipe in 50-ft lengths

Providing a reliable source of drinking water can be a challenge for any city. But when that city is densely populated, surrounded on three sides by water and in the middle of one of the most seismically active areas on earth – the challenge becomes even greater.

Such is the case for the City of San Francisco and the San Francisco Public Utilities Commission (SFPUC). Twice during the 20th century, earthquakes devastated the city, including the notorious 1906 earthquake that rendered the much of the city a moonscape. In 1989, the city was rocked again by the Loma Prieto earthquake, serving as a reminder of the harmful potential of Mother Nature.

To protect the area from the effects of future quakes, SFPUC has embarked on its $4.8 billion Water System Improvement Program to ensure a seismically reliable water system for Bay Area residents. Included in that program is the Bay Tunnel, which provides an integral link between the water supply source in the mountains east of the San Francisco Bay, to the west side of the Bay and the City of San Francisco itself.

The Bay Tunnel has been successfully completed and is delivering high-quality and reliable water to residents. As a result of its success, it is being bestowed with the Tunnel Achievement Award for Project Excellence. The award will be formally presented at the Tunneling Short Course at the Colorado School of Mines, Sept. 14-17, in Golden, Colorado. The award ceremony will take place at the annual banquet on the evening of Tuesday, Sept. 15.

“The Bay Tunnel is being honored as a very successful tunneling project, completed ahead of schedule through the San Francisco Bay in difficult ground conditions and under environmentally sensitive habitats,” said Levent Ozdemir, director of the Tunneling Short Course. “This was the first tunnel to be excavated under the San Francisco Bay.”

The Bay Tunnel is significant in that it is the first-ever bored tunnel under San Francisco Bay. It replaces pipelines that were built in the 1920s and 30s that lay along the bay floor and on trestles that cross over environmentally sensitive marsh land. The pipe and the trestle are in a deteriorated condition. 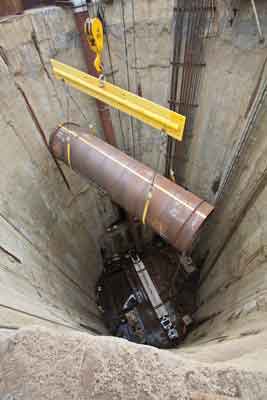 The Bay Tunnel extends 5 miles under San Francisco Bay at depths of up to 100 ft and was constructed using a specialized earth pressure balance (EPB) TBM. The excavated diameter is 15 ft with a bolted, gasketed, concrete liner with a 9-ft welded steel water carrier pipeline that was manufactured by Northwest Pipe in 50-ft lengths.

“The biggest challenge we faced was building the tunnel 5 miles under the bay with one access point,” said Jim Stevens, project manager for the JV. “There were no intermediate shafts and no option to construct a rescue shaft, so everything had to go really, really well.”

Tunnel mining, using a Hitachi Zosen TBM built in Osaka, Japan, began in 2012 and tunnel boring was completed in 2013 – 6 months early. The TBM was equipped with special hardened teeth that were able to excavate the entire length without being replaced, Stevens said.

Alternatives to the bored tunnel included new pipelines across the Bay and new pipelines around the south of the Bay, but the tunneled solution was deemed the best option from a technical and environmental standpoint. “It wasn’t the cheapest option, but it was the project that would accomplish all of our goals,” said Dan Wade, director of WSIP.

The spoils resulting from excavation during this project were to be used as part of the South Bay Salt Pond Restoration Project, a conversion of adjacent salt ponds to marshland. The portion of the existing pipelines that are replaced by the tunnel will be capped on each end and will be abandoned in place.

The tunnel was constructed by the contracting team of Michels/Jay Dee/Coluccio, which was the low bidder at $215.3 million. Construction began in April 2010 and completed in 2015. Jacobs Associates led the tunnel design team, which also included URS, Fugro West and Telamon Engineering. Jacobs Engineering was the construction manager.

Ground conditions consisted primarily of the San Antonio Formation, which contains interlayered clays, silts and sands, leading to the selection of an EPB TBM. Included in the expected geology was a 700-ft long reach of Franciscan Complex (Basalt) bedrock, which can contain hard and abrasive materials different from the majority of the alignment.

Due to the sensitive environment and wetlands in the area of the shaft, crews froze the ground prior to excavating the shaft. The contractor installed 50 freeze pipes, each 128-ft long, that formed the 28-ft diameter outer portion of the shaft with additional pipes installed through the center to freeze the bottom of the shaft. The freeze was used to prevent movement of groundwater and to avoid leakage during construction.

Challenges included difficult ground conditions, the proximity of California’s largest active seismic faults (the San Andreas and the Hayward faults), and the presence of environmentally sensitive habitats that precluded the option to construct intermediate shafts.

For Stevens, the key to success went beyond technical execution. “To me the success of the job had to do with the team between the city and the contractor,” he said. “The construction management team for the owner (Jacobs Engineering) was led by Bob Mues, who has had experience building tunnels all over the world. He had the same goal that we did as the contractor, which was to get the project done safely and with high quality in a timely manner. We were able to accomplish that because of his attitude.

“We didn’t have formal partnering on this project, but when you have experienced people on both sides with common goals, partnering comes naturally.”

In October 2014, city officials gathered at the Pulgas Water Temple – the spot where the waters from the Hetch Hetchy Reservoir end their 160-mile journey as they enter the Crystal Springs Reservoir on the San Francisco Peninsula – to celebrate the flow of water through the Bay Tunnel.

The completion of the Bay Tunnel along with the other projects within the Water System Improvement Program will provide seismic reliability to SFPUC’s 2.6 million customers in Alameda, Santa Clara, San Mateo and San Francisco counties – now, and for the future.