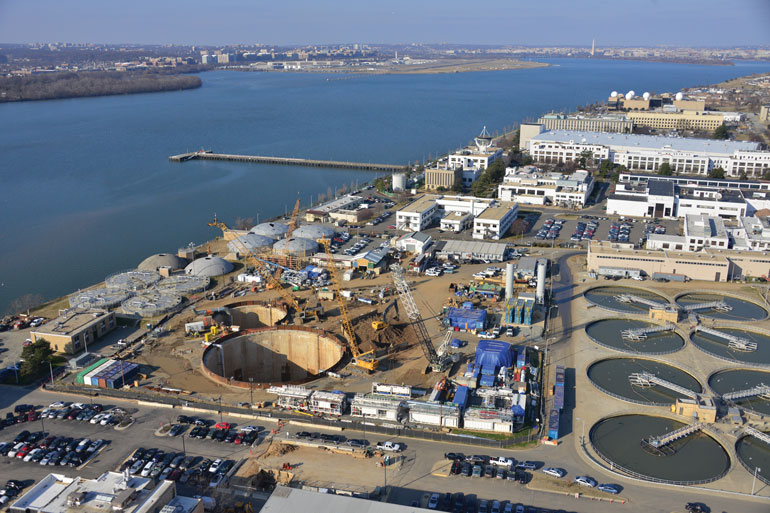 One of the benefits of the design-build approach became apparent on the construction of the Figure 8 launch shaft.

As the capital of the United States, Washington, D.C. is home to movers and shakers who provide direction for the country. Sewer utilities are not often among those who shake the foundation of conventional thinking. DC Water, however, took a new approach to constructing its Blue Plains Tunnel and proved that utilities can also be innovative and creative.

A $2.6 billion, 25-year consent decree program, required DC Water to build the Blue Plains Tunnel Project by December 2015. In performing their upfront preparation, DC Water leaders decided that a design-build procurement, one of the first and largest such procurements for a sewer utility in the United States, would give the utility the highest probability for success. That decision paid off; the project was completed on time and under budget, setting the tone for the future works.

For its successful completion, innovation, teamwork and technical accomplishments, the Blue Plains Tunnel is the recipient of the 2017 Tunnel Achievement Award for Project Excellence.

Like many older cities on the East Coast and Midwest, Washington, D.C., is served by both combined and separate sanitary sewer systems. A combined sewer carries both sewage and runoff from storms. During rains, storm water combines with sanitary sewer flows and any excess is discharged into local waterways, in this case the Potomac and Anacostia Rivers, and Rock Creek. The consent decree, issued in 2005, requires the utility to reduce overflows by 96 percent. To accomplish this, DC Water is building a system of tunnels to store and eventually treat overflows along with the installation of Green Infrastructure. 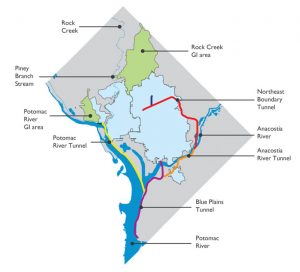 The Blue Plains Tunnel is part of a $2.6 billion, 25-year consent decree program.

The Blue Plains Tunnel is DC Water’s first completed tunnel project. The project is 24,300 lf of 23-ft ID tunnel along with the construction of a 132-ft diameter dewatering shaft, which will house a 250 mgd pumping station to dewater the tunnel system, and a 76-ft diameter screening shaft at the Blue Plains Advanced Wastewater Treatment Plant. The two shafts also serve as the main access point for the tunnel construction.

A $330 million design-build contract was awarded to a joint venture of Traylor/Skanska/Jay Dee JV in 2011. CH2M served as the designer for the design-build team, while the Program Consultants Organization (PCO), comprised of Greeley and Hansen, McMillen Jacobs Associates provided consulting services for DC Water. EPC Consultants Inc. performed as the Construction Manager for DC Water on the project. 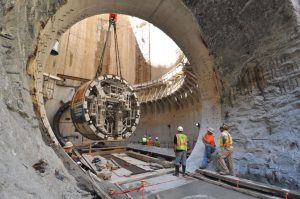 Crews lower the Herrenknecht TBM into the launch shaft.

While the project was a technical success in terms of construction, notably including the Figure 8 dewatering shaft/screening shaft that served as the launch point, it all started with a new approach to contracting.
“Using design-build was a game-changer for us,” said DC Water CEO and general manager George Hawkins. “The Blue Plains Tunnel was our first design-build procurement, and it went against the notion that utilities cannot be creative and innovative. Due to its success, using design-build is standard operating procedure unless there is a specific reason not to use it.”

DC Water recognized the importance of getting the project built successfully in terms of schedule and budget, and it began exploring options to build the mandated tunnel. “We were dealing with the first major project in a multi-billion dollar program, so we had to make sure that we needed to maintain our credibility with our rate-payers,” Hawkins said. “Additionally, the consent decree has absolute deadlines and milestones that must be met. So, with the stakes so high, our team felt that the risk and reward system in design-build was better structured than standard design-bid-build.”

DC Water hired leading experts, both on staff and outsourced, to lead the agency through its first design-build and the largest capital project in its history.

DC Water hired the PCO to assist in the planning and preliminary design of the Blue Plains Tunnel. The PCO worked with DC Water to change the general conditions of the contracts to develop the concept of short-listing contractors and to use best-value award criteria (price plus technical proposal).

Once design-build teams were short-listed, DC Water met with teams to discuss details of the project and each team’s approach to building the job. “We referred to this as a collaboration period,” said McMillen Jacobs Associates’ Bill Edgerton. “During this time, we could talk to the teams and give them a chance to ask questions of us. This helped to get everybody on the same page and work through any potential issues before they arose during the actual construction.” 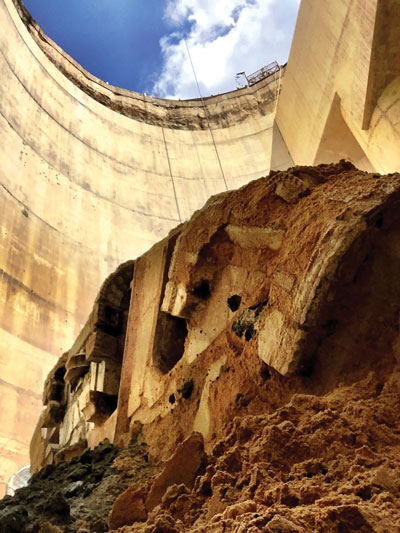 The Blue Plains Tunnel was completed on time and under budget, setting the tone for the future works. (Photo by James Wonneberg.)

DC Water short-listed three design-build teams before selecting the joint venture of Traylor Brothers Inc., Skanska and Jay Dee, and its consultant, CH2M. The Blue Plains Tunnel contract was awarded for $330 million in 2011.

Design build was new for the owner and for the contractor. “It was our underground division’s first experience with design-build, so we definitely had to go through some growing pains,” said Mike Jatczak of Traylor Brothers. “One of things we learned early on was that there was not enough time in the schedule for design reviews, so we had to work in collaboration with the owner’s engineers to develop the design packages.”
One of the benefits of the design-build approach became apparent on the construction of the Figure 8 launch shaft. Originally conceived as separate shafts connected by a 125-ft adit, the design-build team proposed constructing the shafts adjacent to each other to eliminate the cost and risk of constructing an adit, according to Mark Johnson of CH2M. Eliminating the adit, however, complicated the design and required close coordination between the designer and contractor during construction.

Further complicating the process was making sure that the design would meet the needs of a separate group within DC Water that would ultimately be operating the dewatering and screening facilities would ultimately occupy the shafts. “Our shaft had to support follow-on internal loads, but all of the information was not available at bid time, so it was a challenging and dynamic process during construction,” said Brett Zernich of Traylor Brothers. 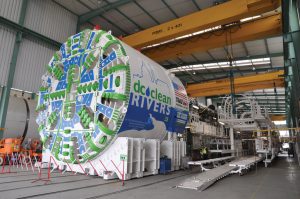 The $30 million Herrenknecht TBM before being shipped to the project site.

Constructing the Blue Plains Tunnel with cast-in gaskets in segments marked one of the first times this was done in United States history, according to Anthony Harding of CH2M, who credits segment manufacturer Bay State Precast in making the cast-in segments a reality. “We were convinced that there were advantages of using cast-in gaskets, but there was an investment in people and training by Bay State Precast in making them a reality,” Harding said.

Lady Bird removed approximately 1.2 million tons of material. This was hauled away in nearly 72,000 truckloads over the last two years. The tunnel was built with 28,189 pre-cast concrete segments which made up 4,027 full rings.

The ground itself was relatively forgiving, but there were sensitive structures, including old brick sewers, that needed to be crossed, said Martin Ellis of CH2M. “There were some areas where grouting was done for precautionary reasons, but the contractor was able to keep ground movement within tolerance,”.

With the successful completion of the Blue Plains Tunnel Project on time and below budget, DC Water followed the same design-build approach for procuring the Anacostia River Tunnel, the First Street Tunnel, and the Northeast Boundary Tunnel projects. “The project outcome has exceeded expectations, so much so that we are doing all of our big projects by design-build,” Hawkins said. “We feel that this is the best approach to minimize risk of missing schedule dates, deadlines and sticking to the budget at hand.

“But success doesn’t happen by accident. We had careful forethought and put together a team – both in-house and consultants – to make sure we had the wisdom and experience to do the job right. Design-build definitely requires more work from the owner on the front end, but we feel like it has paid for itself tenfold by how efficient and effective the process is.”

The ultimate goal, of course, is cleaner water and a healthier environment. As the Clean Rivers Project works its way toward completion, the next generation of Washingtonians can reap the benefits.