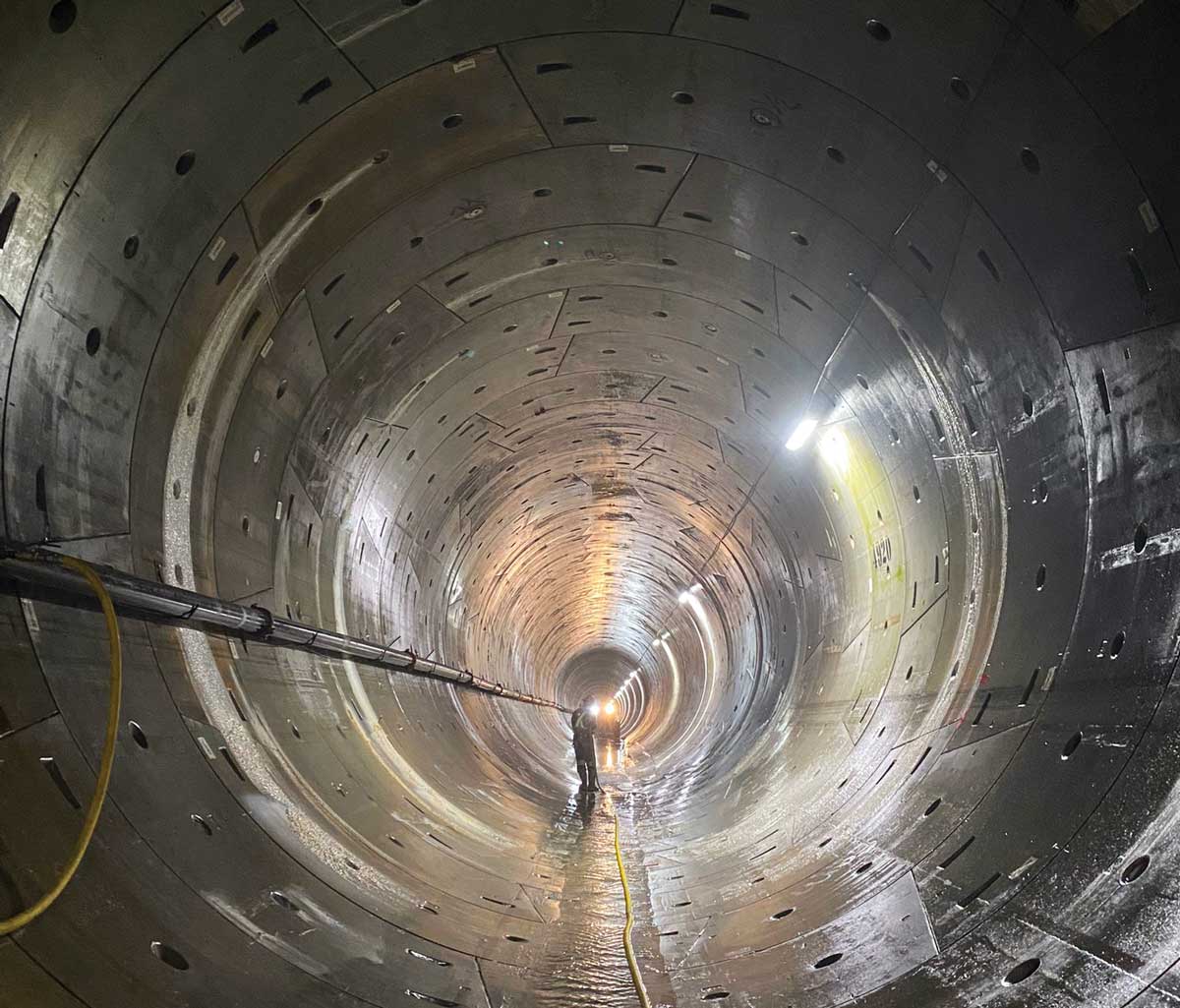 The Kemano T2 Project is part of Rio Tinto’s plan to ensure reliable power from the Kemano Powerhouse to its recently modernized BC Works aluminum smelter in Kitimat, British Columbia. The construction of the project involved boring a tunnel through a mountain in the rugged northwest of Canada. The remoteness of the site added considerable challenges to the usual struggle against the ground.

The completion of the project was the result of an outstanding example of team collaboration among project parties and stakeholders, including First Nations, a strong technical approach to overcome the expected difficult geology, and a shared vision for the project’s success.

The T2 Tunnel went online this summer and has been awarded the 2022 Tunnel Achievement Award for Project Excellence. Established in 2012, the Tunnel Achievement Award recognizes successfully completed projects that demonstrate innovation and teamwork and provide benefits to the community. The award is presented annually at the Breakthroughs in Tunneling Short Course, and took place Sept. 12-14, 2022, on the campus of the University of Denver in Colorado. The award is presented in partnership with the organizers of the Breakthroughs in Tunneling Short Course and TBM: Tunnel Business Magazine. This is the first time the Tunnel Achievement Award has recognized a private-sector project. 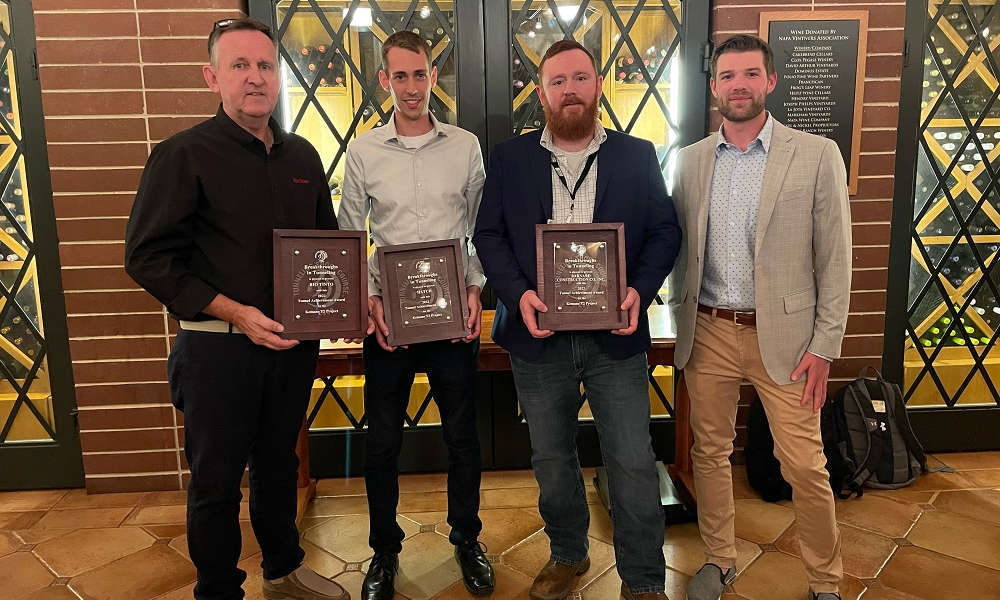 “The project was a success on multiple levels.” said Gregory “Alf” Garnett, Project Manager for Rio Tinto. “We worked with the First Nations to ensure the project had a positive effect with them while creating opportunities for employment and a sustainable business in the region. Ultimately, we were successful in securing an efficient energy source for the smelter as well as 100,000 households in Northern British Columbia. The generating plant takes rainwater from the mountain and turns it into electricity, and the cycle repeats itself – there is no better example of clean energy.” 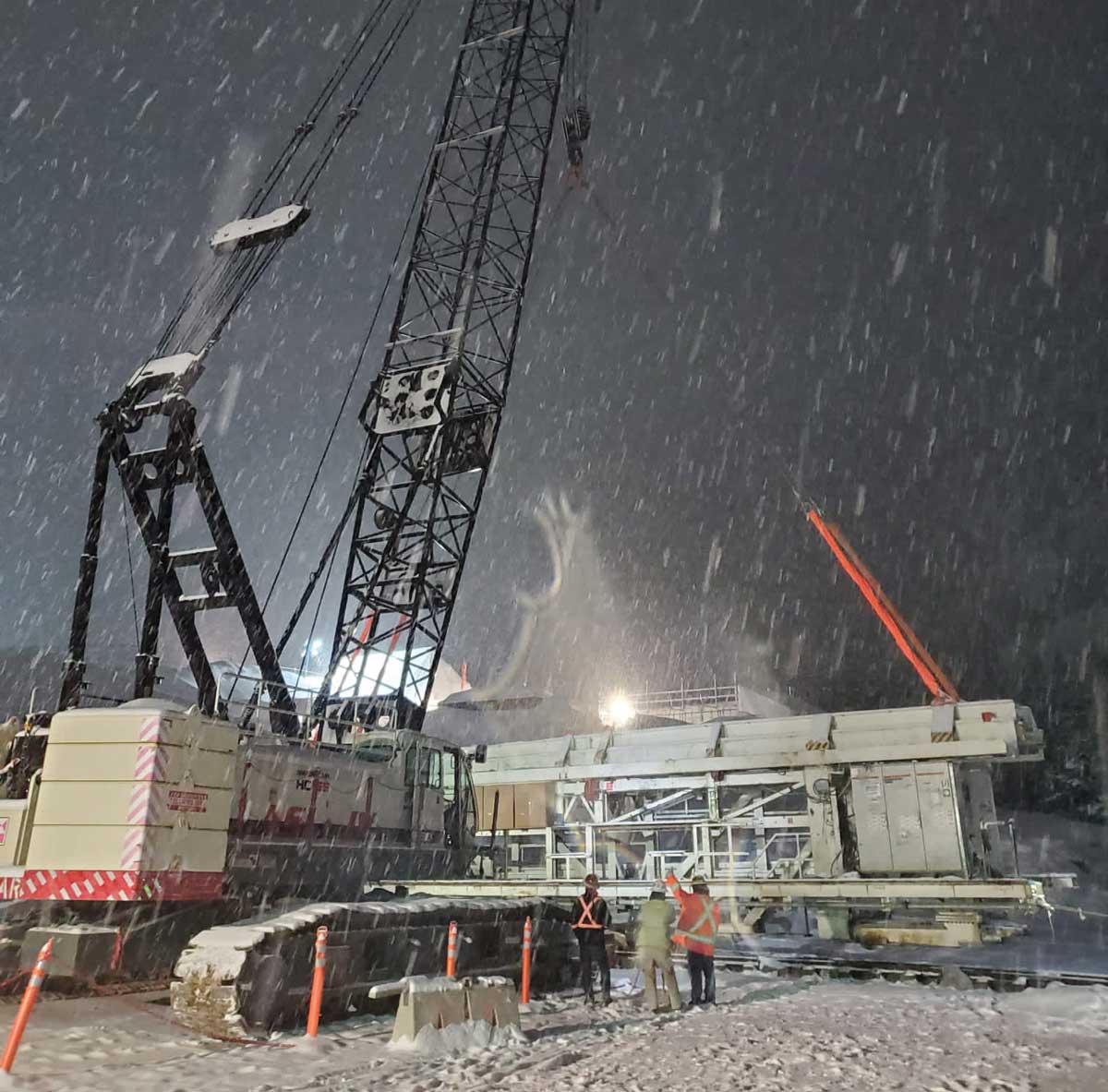 Decades in the Making

Rio Tinto is among the largest mining companies in the world and operates the Kemano power facility and Kitimat smelter, which have been in use for more than six decades. With its hydropower source, the Kitimat smelting facility produces aluminum with one of the lowest carbon footprints in the world.

Rio Tinto recently completed a $6 billion modernization of the smelting facility and began the T2 Tunnel Project to ensure a reliable power supply for the facility. Given its remote location, the Kemano hydro station is the key source of power for the smelter. The power station draws in water from the Nechako Reservoir via a 16-km tunnel under Mount Dubose that was built in the 1950s.

A second tunnel has long been envisioned to provide redundancy and allow for maintenance and repair to the existing tunnel without disrupting smelter operations. The T2 Tunnel Project involved the construction of a new 7.6km tunnel excavated by tunnel boring machine (TBM) and the refurbishment of a previously excavated 8.4km tunnel section that had lain dormant since the 1990s.

Rio Tinto contracted Hatch Ltd. under an Engineer, Procure, Construction Management (EPCM) contract to coordinate the design, procurement, and construction of the new tunnel. Hatch provides design and engineering services on civil tunneling projects across the country and internationally; they have a long history of working with Rio Tinto and were instrumental in the planning for the Kemano T2 Project.

In May 2020, Barnard responded to a Request for Proposal to complete the remaining 4 km of the Upstream TBM tunnel drive. Two days after being awarded the project on July 8, 2020, Barnard mobilized an initial group of 10 staff to complete a 14-day quarantine in Terrace, British Columbia. This group then mobilized to the project site and restarted TBM operations. Barnard crews used the existing single shield Herrenknecht TBM to bore the new tunnel section. The machine, measuring 6.5 m in diameter, weighed 1,200 metric tonnes and stretched 190 m in length. The Cheslatta Carrier Nation, a key partner in the project, in conjunction with the Haisla Nation school named the TBM “tl’ughus” after the legendary giant snake that—much like a TBM—bored its way through the mountains to travel between lakes.

The TBM bored up to 600 m below Mount Dubose, encountering high-strength, abrasive, granitic rock with the potential for high groundwater pressures. To prevent damage to the precast concrete tunnel lining (PCTL) from the groundwater pressure buildup, relief holes were drilled in the lining after annular grouting.
“The segmental lining was designed as a ‘leaky lining’ to prevent external pressure, but it was gasketed to maintain grout,” said Gary Kramer of Hatch. “Water pressure was a major concern with the potential to encounter up to 60 bar of pressure, along with the presence of vertical and horizontal springs in the area.”

The PCTL segments were cast by MSE Precast on Vancouver Island and shipped by barge to the project site. The TBM was launched from the T2 Adit at Horetzky Landing, and the PCTL segments were placed continuously as the tunnel excavation advanced. The TBM broke into the narrow T2 stub tunnel in fall 2021, which marked the completion of tunneling. Then, the TBM trailing gear was backed out of the tunnel for disassembly and removal while the cutterhead, main drive, and shield components were demolished. The TBM shield was left in place to be shotcreted in as part of the final lining.

In addition to operating and maintaining the TBM, Barnard was responsible for the underground logistics supporting all excavation. Support activities included extending the rail section, ventilation bag, water pipe, high-voltage cable, tunnel lighting, refuge chambers, PCTL rings, and two-component annular grouting. Along with the ancillary support systems, Barnard implemented an extensive TBM maintenance program with the goal of reaching the project’s TBM availability target of 90 percent (89.7 percent availability was achieved). After the TBM broke through into the existing water intake structure, Barnard was responsible for disassembling and removing the TBM and proof grouting the PCTL segments installed by the previous contractor. 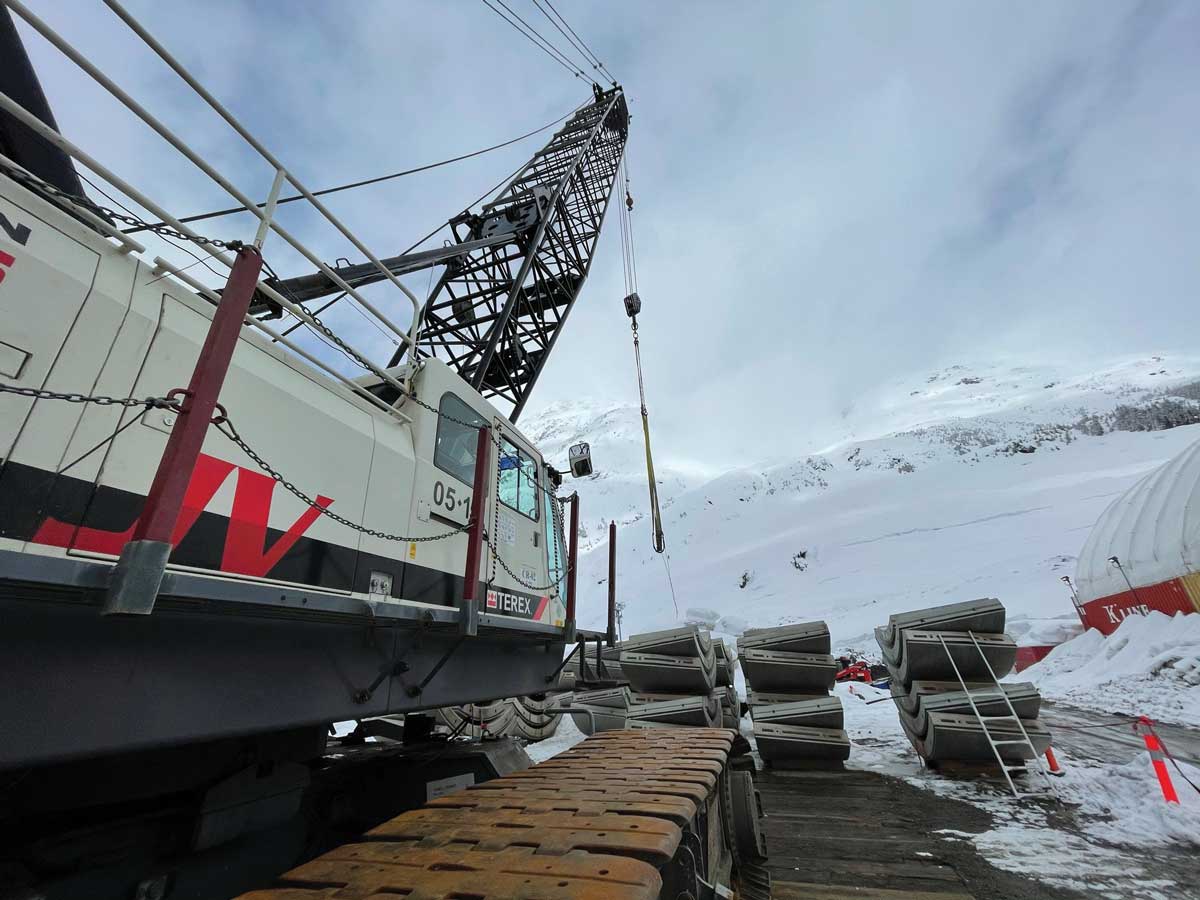 The remote project site was accessible only by air or water. A trip to the site involved a three-part journey. First, personnel traveled by plane to Terrace. From there, they were bussed to a large catamaran that carried them through the inland coastal waterways. The final leg of the journey to the project site was by bus. When the access roads were blocked by avalanches, that final trip was made by helicopter. All material and equipment were barged to and from the site and required early and extensive planning.

“Everything from the camp supplies to the construction equipment and materials had to come in on a barge – a 12-hour trip in tough conditions that were generally windy, rainy or snowy,” Garnett said. “In addition, we had to deal with the pandemic that required us to change our scope and re-evaluate our priorities midway through the project.”

According to representatives from Barnard, work was planned months in advance to ensure materials and equipment would be delivered to the jobsite on time. There were no stores or vendors down the street, so a quick run to the store was not a possibility if something was needed urgently. Warehousing materials on the site, keeping up with inventory, and maintaining a plus/minus sheet for all consumable items was a necessity. Incorrect inventory management could stop the TBM in its tracks.

The harsh winters presented additional challenges—the site is in an area subject to heavy snow and avalanches, and sub-freezing temperatures in the winters are the norm. Winter weather and avalanches frequently impeded travel up and down the access road and even prevented access to the tunnel portal area at times. The road to Horetzky Landing is one of the most active and controlled avalanche zones in North America, and during avalanche season, the project was supported by a full-time avalanche control team. Heavy rainfall also created hazards on the main access road.

The project team also faced another environmental challenge. The Kemano River is a trophy salmon river, and hungry, protective grizzly bears were a constant hazard during non-winter months. Bear training, awareness, and bear spray were mandatory for project personnel.

This project occurred in the midst of the COVID-19 pandemic, and the Canadian government and the Provincial Health Organization imposed an evolving set of rules and regulations that presented constant challenges. For example, the COVID restrictions in early 2021 limited the number of personnel allowed on site, which impacted all the work for a period of time. Barnard took advantage of the non-production time and performed significant repairs to the track system, which was supported on wooden timbers that had degraded over time by the water flowing through the invert and were a source of numerous derailments.

Another challenge was the process of designing, fabricating, and commissioning a two-component annular grouting system on the TBM in lieu of the pea gravel and contact grouting system previously used on the project. Technicians from TBM manufacturer Herrenknecht assisted the Barnard team with the development of the grouting system.

The TBM broke through into an existing water intake structure constructed in the 1950s, which meant that the TBM had to be dismantled underground and removed through the bored tunnel via rail-mounted flatcars and special bogies designed and fabricated by Herrenknecht. The disassembly was a unique scope of work that required careful planning and coordination with the client, Herrenknecht, and other contractors that were working underground at the same time.

While the use of TBMs is relatively uncommon for mining projects, Garnett sees their potential for future projects. “Given the right parameters, TBMs and continuous mining equipment can be a good fit for mining projects. TBMs come with challenges, but when set up they can get from Point A to Point B quicker than traditional drill-and-blast excavation.” 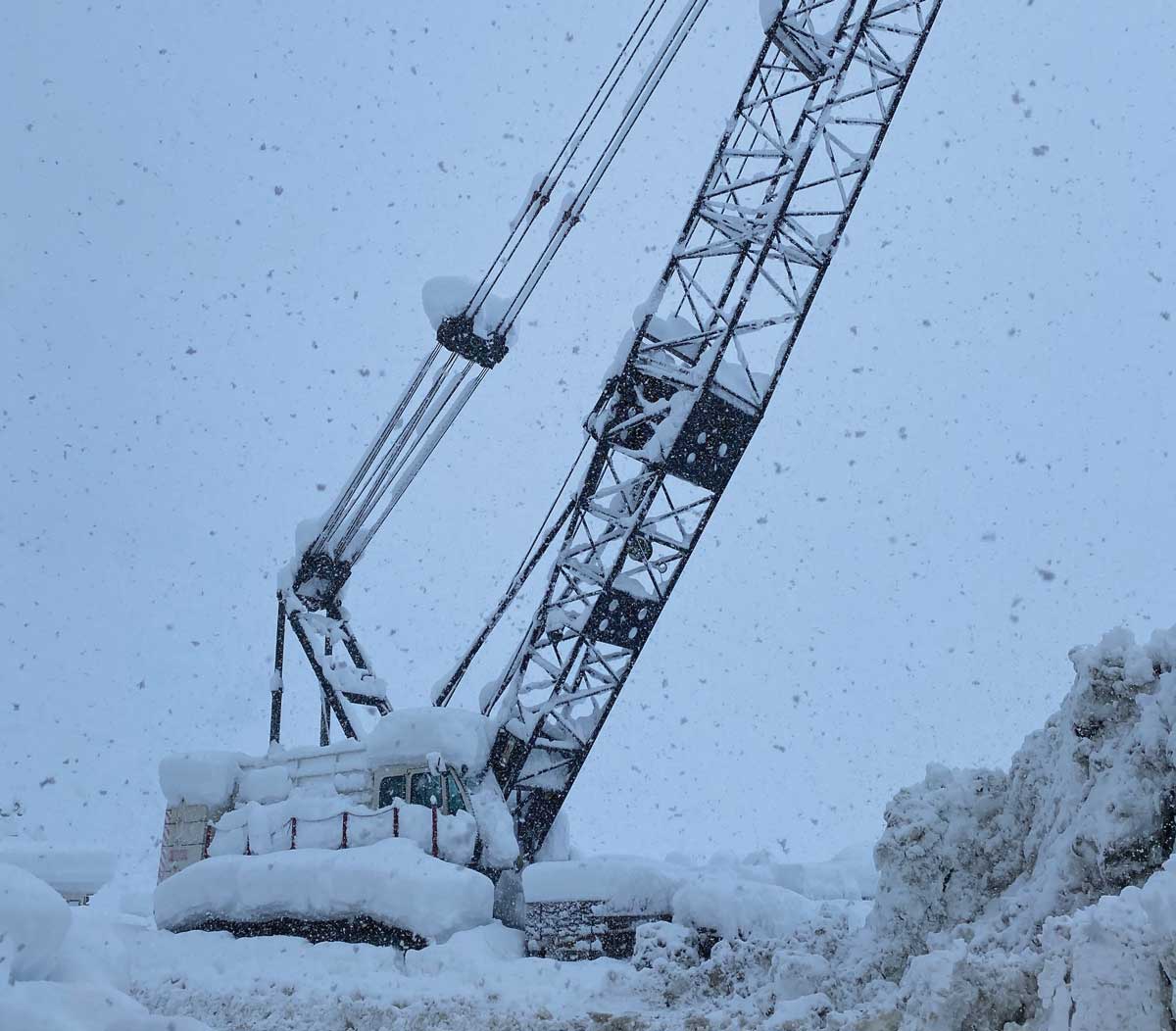 Getting the Job Done

In completing the TBM tunnel, the camaraderie amongst all of the contractors and between craft and management teams was remarkable. The willingness of all the project stakeholders to come together and work as a team in tough situations stood out.

Hatch also noted that the collaboration of project participants was key to the success of the project. “Because we were dealing with up to a dozen contractors, including three main underground contractors, we integrated our team to develop a ‘one team’ approach,” said Hatch’s Riley McMillen. “This really had the effect of breaking down the barriers. If anyone had a problem, everyone had a problem. We used all the resources available to address the challenges, even if it was outside one party’s scope.”

According to Barnard’s representatives, no job is too remote or too tough to finish. A project like this requires flexibility to adapt to changing conditions and careful planning to address the logistics of personnel and material procurement and delivery in a remote, harsh environment. Barnard’s team, Rio Tinto, Hatch and the other contractors on site maintained a project-first mentality that was crucial to the successful completion of the T2 Tunnel.

Ultimately, the T2 Tunnel helps to provide a clean and renewable power source not only for the smelter but Northern British Columbia.

Established in 2012, the Tunnel Achievement Award recognizes successfully completed projects that demonstrate innovation and teamwork and provide benefits to the community. The award is presented by the organizers of the Breakthroughs in Tunneling Short Course in conjunction with TBM: Tunnel Business Magazine.