You are at:Home»Featured Stories»Tunnel Achievement Award — Lake Mead Intake No. 3 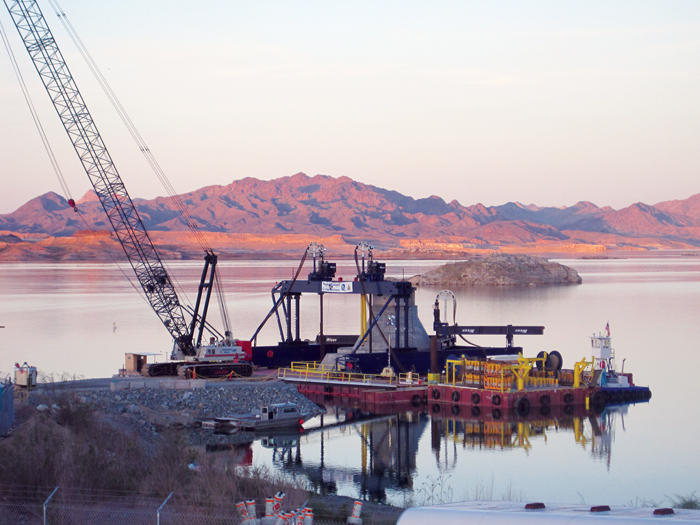 VTC built the intake structure on shore and lowered it into position from the lake.

The City of Lights. Entertainment Capital of the World. Sin City. Whatever you call it, Las Vegas, Nevada, is home to more than 2 million residents in the metropolitan area with countless visitors flocking to the city each day. And, of course, all those people need a steady supply of water.

Given that Las Vegas is situated in the arid Southwest, water supply is critical to the sustainability region. The construction of the Hoover Dam across the Colorado River in the 1930s, forming Lake Mead behind it, helped provide water needed for the growth of Las Vegas. While springs and wells were the primary source of water in the early history of Las Vegas, the completion of the Southern Nevada Water Project in 1971 provided a steady stream of fresh water to the valley, allowing for unprecedented growth.

Today, more than 90 percent of Southern Nevada’s water comes from the Colorado River. However, recent drought conditions have threatened that supply. In fact, water levels in Lake Mead are approaching historic lows. To address this, the Southern Nevada Water Authority (SNWA), created in 1991 to manage water in the greater Las Vegas area, undertook an ambitious project to protect the region’s water supply.

The project – Intake No. 3 – created a new intake at the bottom of Lake Mead that would allow water supply to continue in the event that water levels drop below the elevation of SNWA’s two existing intakes. Completing the project involved one of the most technically challenging tunneling projects in the world. In fact, the tunnel encountered the highest pressure (15 bar) for a TBM project worldwide. Because of the many challenges, innovative solutions and teamwork that led to its successful completion, the Intake No. 3 project is the 2016 Tunnel Achievement Award for Project Excellence.

Ironically, the need for the project began to materialize in 2002, soon after the completion of the Intake No. 2 project. “2002 was an exceptionally low yield in the snowpack in the Colorado River basin, leading to flows that were 25 percent of normal,” said Marc Jensen, SNWA’s director of engineering. “That got people’s attention. By 2004, we started talking about what we would do if the lake level started to drop.” 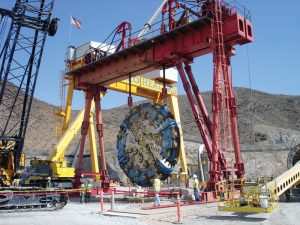 VTC used a Herrenknecht dual-mode TBM, which was subjected to a world-record 15 bar of pressure while boring under the lake.

As the drought continued and the lake level continued to fall, SNWA developed a plan for an intake at the bottom of the lake, and in 2007 began the process of hiring a design-build contractor to build the intake, a pump station onshore, and a 3-mile long tunnel under the lake to connect the two. The project is online, and perhaps just in time. Lake levels were at about 1,074 ft above sea level in late June; Intake No. 1 (installed in 1971) would be deemed inoperable at elevation 1,050 ft, and Intake No. 2 (installed in 2000) inoperable at elevation 1,000 ft.

Construction began on Intake No. 3 in 2008 and it went into operation in September 2015. TBM tunneling took place from 2011 to 2014. Intake No. 3, at elevation 860 ft, substantially increases the reliability and flexibility of Southern Nevada’s water treatment and delivery system. Combined with the low lake level pumping station that is currently under consideration, the new intake enhances the SNWA’s existing intake system, enabling Southern Nevada to continue accessing its water resources in Lake Mead, even if lake elevations drop too low for Hoover Dam to release water to downstream users.

When it was procured in 2007, the design-build contracting method was relatively new for tunneling and underground construction projects in the United States. In fact, Nevada had only recently passed legislation allowing public entities to pursue design-build procurement. SNWA elected to use design-build due to the complex nature of the project, according to Erika Moonin, project manager for SNWA. “Because of the technical challenges associated with the project we thought it would be best if the designer was part of the contractor team,” she said. “Having the designer involved early with the contractor allows the means and methods of tunnel construction to be integrated with the design.” Design-build contracting had the added benefit of compressing the schedule because the design and construction cycles overlap, unlike traditional design-bid-build delivery in which the design is completed before the project is bid.

“Despite the complexities and risk due to the challenging ground conditions, the project was rather straight-forward – essentially a hole at the bottom of the lake with a tunnel connecting it to our existing utilities,” Jensen said. “That meant we had the flexibility to allow the contractor to have more control over the means and methods. Design-build is not the right approach for every project; you have to weigh the pros and cons and select the one most appropriate for your needs.” 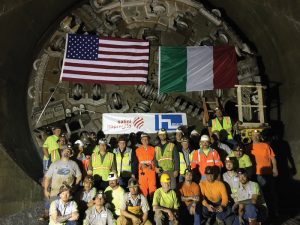 Crews marked a significant milestone with the completion of tunneling in December 2014.

From the start, project planners realized that constructing the tunnel, and the intake itself, was going to be very technically challenging. The tunnel passes through the so-called Muddy Creek Formation, with alternating layers of hard rock and conglomerates, as well as fault zones. The fault zones full of secondary minerals are partly filled with water from Lake Mead.

The presence of faults meant that the tunneling machine could face hydrostatic pressures of up to 17 bar if the tunnel had direct connectivity to the lake at its highest level. During tunneling, the machine encountered actual pressures of 15 bar, an unprecedented amount. Prior to that, the highest pressures encountered was 11 bar experienced during the construction of the Hallandsas tunnel in Sweden in 2013.

During its geotechnical investigation, SNWA drilled approximately 50 boreholes to verify the geology and identify a corridor in which the contractor could bore the tunnel. The 1,000-ft wide corridor was selected to avoid volcanics that were found during the investigation.

Unfortunately, not all challenging ground could be avoided. During the construction of the starter tunnel at the shaft on Saddle Island, a fault zone with high water pressure was encountered. After trying to contain inflows over a period of four days, the starter tunnel and shaft flooded.

Work continued in an attempt to recover the excavation, but additional inflows were encountered and planners elected to change the alignment to avoid this particular area of bad ground. After six months of fighting the bad ground, and another six months of building a new starter tunnel, the project was back on track.

For the tunnel boring machine, a dual-mode slurry/hard rock machine from Herrenknecht was selected. The machine ended up operating in closed (slurry) mode in about 70 percent of the alignment, Moonin said. At depths of 600 ft, constructing safe havens for TBM maintenance was not an option, so it was equipped with hyberbaric equipment for compressed air interventions if needed. Fortunately, VTC was able to find competent ground at points along the alignment at which they could perform TBM maintenance and repairs that were required due to the abrasive geology. At one point, the entire bearing seal was replaced.

“In close cooperation with the customer, we have configured the Las Vegas machine in such a way that we are well prepared for all possible situations,” says Werner Burger, chief engineer at Herrenknecht. “Even though Vegas Tunnel Constructors did not have to pull out all the stops, it was good to know that they could have. With such demanding projects, in addition to Plan A you also need a Plan B or even C.” 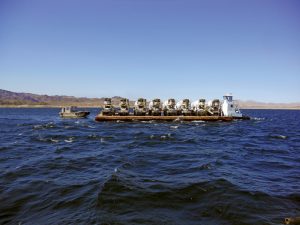 To secure the intake structure, a carefully timed concrete pour was executed from barges ferried into the lake.

Ready-mix trucks were loaded on a barge, eight at a time, and transported three miles from shore to complete the pour over. In total, crews placed 12,000 cu yd of concrete 390 ft below the water’s surface.

“We wanted to make sure that we had a solid block of concrete, so we didn’t want any stoppages during the pour,” Moonin said. “So, the contractor had a continuous rotation of these concrete truck transportation barges back and forth to the placement barge. The process was very carefully planned and the work went very smooth.”

With the completion and activation of Intake No. 3, SNWA has achieved its goal of providing a reliable water supply for citizens and visitors of Las Vegas and surrounding communities.

“It is often the case when a group of people or a community is faced with a difficult or challenging situation, as we were in Southern Nevada with the drought and its potential impact on our water supply, that you’ll get a unification of vision and purpose and commitment to solving that problem,” Jensen said. “We were fortunate in that the community recognized that something needed to be done, and we were able to get commitment from elected officials, our contracting and engineering  partners, and the community to successfully complete the project.”

Completing a job with difficult ground conditions and engineering challenges required teamwork, communication and a willingness to make changes along the way. “The team was very good at being innovative and adapting as things changed,” Moonin said. “There was always good coordination and communication with contingency plans in case we ran into something that was anticipated.

“We knew that the project was going to be difficult, and as it turned out we really had to fight for every inch of ground. It was challenging all the way.”

“Perseverance of the staff and crew even in the face of extreme difficulties and challenges was a key to success,” said Jim McDonald, project director for VTC. “In many cases, the task was the first of its kind in the tunneling industry, and innovative, out-of-the-box solutions had to be devised.

“The owner, SNWA, was committed above all else to successfully finishing the project. This allowed for creative approaches and the formation of a true partnership between owner and design-builder.”