You are at:Home»Featured Stories»Approach to Tunnel Design for Fire Loads 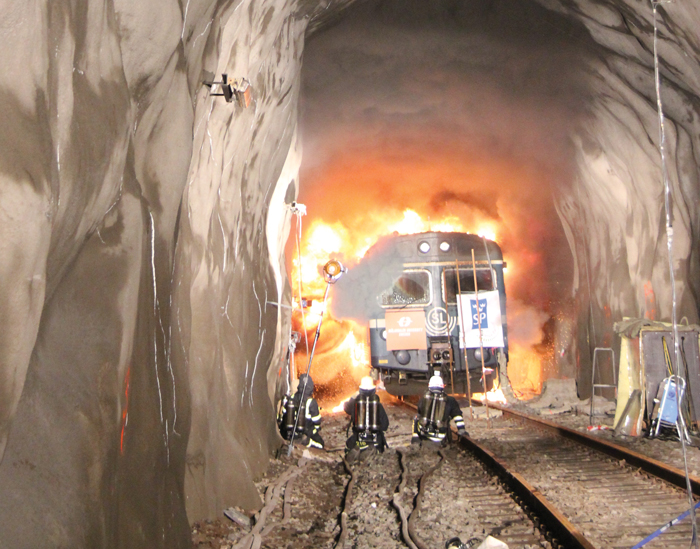 Minimizing the impact of fire on tunnel liner is a top priority for the worldwide engineering community. In the past decade, the industry has made significant strides. Today’s sophisticated design of tunnel liners, in conjunction with modern fire life safety systems, has shown to:

To achieve that level of structural integrity, tunnel owners are incorporating five best practices into the liner design process:

Classifying an underground structure as a tunnel is the most important step at the onset of the planning and designing process. An informed owner realizes the criticality of this first step because a majority of the design decisions depend on it. The tunnel size, clearance envelope, provisions for facility systems, supporting equipment, emergency egress layout, as well as the entire adopted emergency egress scenario, all will be determined based on the initial classification of the facility.

For example a highway that threads under an airport taxiway or a railroad structure passing beneath an over-build (provided it meets a specified length) classifies as a tunnel. We want to ensure that the entire engineering community is vigilant about these rules, so the structure is designed with the appropriate fire life safety and structural protection provisions in case of a fire.

In the past decade, many detrimental tunnel fires have occurred worldwide, impacting lives, structures and economies of adjoining communities. The trend among owners nowadays is to invest in sophisticated tunnel fire engineering and to develop project-specific design fire curves, including fire heat release rate (HRR) curve and time-temperature curve, rather than using off-the-shelf fire curves.

The trend is also to assess the structural fire durability by analyzing heat propagation through the tunnel liner, the impact of the heat on the concrete and steel reinforcement, and the degradation of the structural capacity of the liner. This approach is being used in order to arrive at a better assessment of the impacts of the design fire on the structural tunnel liner and the need for applying a fireproofing system.

Of course, standard fire curves, such as the Rijkswaterstaat (RWS) or ISO fire time-temperature curves, are still valid and many engineers fall back to them when no additional fire engineering is available or planned. However, these curves typically yield more conservative results and are implemented when a fireproofing layer is intended to be applied over the structural liner. This prescriptive approach does not require a detailed understanding of a fire in a tunnel and its effects on the tunnel liner; the tunnel liner would simply be protected by a passive fire protection material meeting the specified duration of fire resistance.

It should be noted that there are two fire curves that are important to the assessment of fires on tunnel liners:

Structural fire durability analyses utilize fire time-temperature curves to assess the damage caused by the fire on the primary structural elements (tunnel liner). The analyses account for adopted fire incident, including fire growth, peak HRR, fire decay, cooling and the impact of the ventilation and the active fire suppression systems.

Computational Fluid Dynamics (CFD) simulations for critical conditions and locations performed using a project-specific HRR curve will define the gas (air) temperature at the face of the concrete liner. Based on the results of the CFD modeling, a heat transfer analyses can be performed to determine the propagation of the heat within the concrete liner. Non-linear structural analyses using finite element modeling can be performed taking into consideration the degradation of the concrete and the reinforcement properties under high temperatures. The results of these analyses will determine the impact of the tunnel fire on the concrete liner and the need of the application of a fireproofing system. 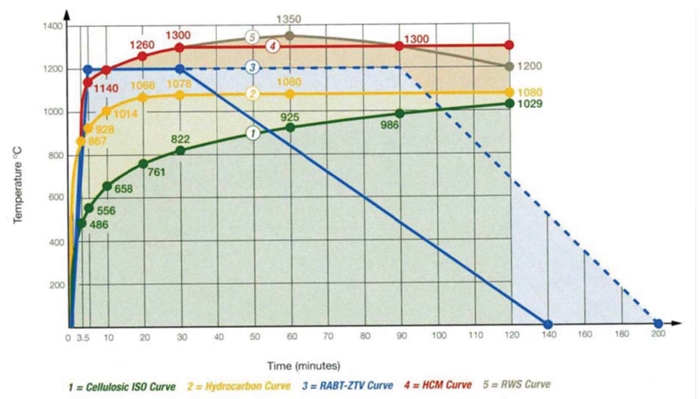 The prescribed time temperature curve, such as the RWS curve (see Figure 1), represents a 200 mW fire HRR curve and includes hydrocarbon fire curves. The use of ventilation and fire suppression system, if present, will reduce the heat release rate and the associated temperature of the fire. For example, for a super-fast fire corresponding to the RWS curve, if tunnel fire detection and suppression systems are available, the fire could be detected and the suppression system implemented in no more than four minutes, resulting in a reduction of the peak HRR to about 145 mW. This approach is more practical and takes advantage of the existing fire protection systems in which the owner has already invested. 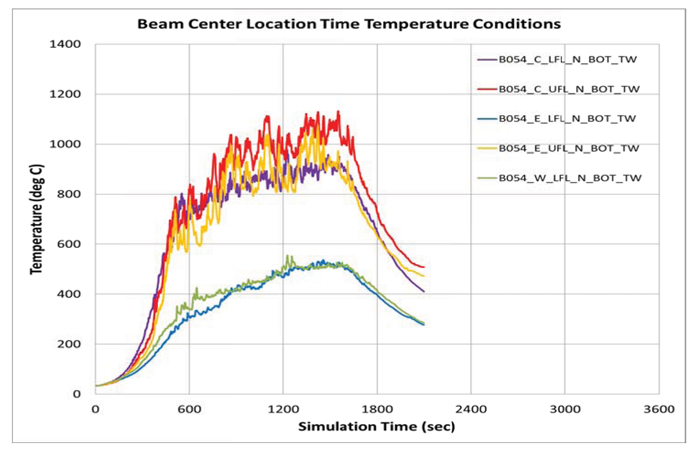 Consequently, customized fire curves (see Figure 2) are becoming the industry norm due to an increased focus on an actual fire event that a tunnel should be designed for, primarily based on the type of the vehicles and their combustibles (or a cargo load) that are allowed into the tunnel. For tunnels designed for specific applications – involving  exposure to well-defined fire scenarios, yielding to reasonably identified maximum fire loads – customized curves are more appropriate and even necessary. Advanced calculation methods available to structural and fire engineers relying on Eurocodes for guidance and using performance-based engineering allow for a more prudent approach to fire protection requirements. This approach is project specific, efficient, realistic and practical. Owners are increasingly resorting to this approach, which generally follows a detailed quantitative and qualitative risk assessment for a fire event in a tunnel.

3. Approvals of authority having jurisdiction when using a customized fire curve.

Municipal and state fire departments are major players in every underground project and have considerable influence in approving the project-adopted fire curves. Often they are the authority having jurisdiction (AHJ).Their approval of fire life safety and structural fire engineering is a must. Because the approval of any adopted fire scenario depends on the approvals of the local fire marshal, it is advantageous to work with the fire department during the development of the customized approach to fire life safety and structural fire durability within the realm of NFPA requirements. This can facilitate dramatically the approval process and correspondingly the project schedule.

Project-specific, performance-based, fire heat release rate and fire temperature curves should utilize the inherit benefits of the existing tunnel fire protection systems including tunnel  ventilation system and tunnel fire suppression system such as sprinklers, deluge or mist. This approach will result in an efficient and economical solution.

This performance-based approach is in accordance with International Fire Engineering Guidelines and the International Code Council’s Performance Code for Buildings and Facilities. This approach was used on various projects, including the SR 99 Alaskan Way Tunnel in Seattle, Presidio Parkway tunnels in San Francisco, Fort Lauderdale airport access, and others. HNTB staff has performed these sophisticated analyses to assess the impact of fires on tunnel liners and to efficiently meet NFPA 502 limitations on steel and concrete temperatures and to prevent explosive spalling. Sometimes application of passive fire protection is recommended.

Engineers quantify heat transfer from hot gases into the liner and calculate temperature distribution within structural elements over time, using sophisticated finite element modeling that account for changes of the tunnel liner material properties (concrete and steel) due to heat exposure. The analyses assess the liner spalling potential, its load carrying capabilities, and its potential deflection. The critical liner section capacity is reduced due to fire impacts and its structural response, including structural capacity, and deformations are checked using thermo-elastoplastic analyses. Such analyses could be ‘coupled,’ where temperatures from a thermal analysis are used as input to the stress analysis and the displacements from the stress analysis are used to update the geometry in the thermal analysis. These analyses, when completed, may lead into a conclusion that a sacrificial concrete layer (concrete cover over reinforcement) is sufficient to protect the tunnel liner and that the temperatures in the reinforcement and the concrete remain below 250 C and 380 C, respectively, as required by NFPA. In such cases, structures would not require fireproofing protection system since their structural capacities are affected marginally. More often than not, owners tend to resort to protecting their tunnel’s structural integrity from fires using the sacrificial concrete protective cover due to its constructability advantages, the fact that it is ‘maintenance-free’ and its inspection falls into the pattern of regular facility inspections. Additional reinforcement, if required within the additional sacrificial concrete protective cover layer, usually outweighs the costs of a separate fireproofing material and the costs of its periodic inspections, maintenance and replacements as needed.

Any water or moisture trapped in the tunnel’s reinforced concrete lining – and no matter how old the concrete may be, it still contains chemically bonded water – turns into a water vapor when exposed to extreme heat. The pressure generated by the water vapor during a fire event results in violent explosions, which may inhibit fire fighters and first responders’ intervention.

Under extreme heat, the PP microfibers’ synthetic resin – a polymer of propylene – melts, creating channels or voids into which the steam generated from the evaporation of the trapped moisture can expand or escape without internal pressure, reducing or eliminating explosive spalling. According to tests, fiber-modified concrete exhibited less or no spalling vs. concrete without PP fibers.

Although PP microfibers are effective in preventing spalling and avoiding hazards from falling pieces of concrete, they do not contribute to the tunnel liner overall strength and durability under fire.

• Super concrete. Still in the laboratory stage, a new fire-resistant concrete called super concrete has shown to have a compressive strength of 160 MPa (about 2-3 times that of high-strength concrete) together with a tensile ductility of more than 300 times that of high-strength concrete, according to the University of Michigan. Furthermore, recent research at the Braunschweig University of Technology in Germany showed that a precast segmental liner with a sophisticated concrete mix, an optimized selection of aggregates consisting of basaltic gravel and quartzite, and the addition of 2 to 3 kg/m³ polypropylene fiber, can withstand significant fire loads with temperatures up to 1,200 C for 90 minutes.

Sanja   Zlatanic, P.E., is chief tunneling engineer for HNTB Corp. She brings more than 25 years of experience in project and engineering management of mega transportation, transit and underground projects. Zlatanic has been responsible for managing all phases of major multibillion dollar projects, including extensive multidisciplinary joint venture staff, from feasibility and conceptual engineering through final design and construction. She has led or been a key member of the design management or technical oversight on East Side Access, Access to the Region’s Core, No. 7 Line Extension, Superstorm Sandy recovery projects, Los Angeles County MTA’s Crenshaw/LAX project, and Istanbul Strait Road Crossing Tunnel. She is an active member of various industry societies and has published numerous articles, chaired conference sessions and made presentations on the design and construction of tunnels and underground facilities. She can be reached at (212) 294-7567 or szlatanic@hntb.com.