You undoubtedly know the many challenges faced by government entities, facility managers and engineers when it comes to tunnel maintenance, including tunnel lighting systems, life safety systems, ventilation systems, tile cleaning, ice and snow removal at the portals, and concrete repairs. This article will highlight tunnel lighting systems and then introduce you to the recently completed Woodall Rodgers Tunnel Project in Dallas, Texas.

What Time Is It?
The lighting requirements of a tunnel are completely different than those of a conventional roadway. Whereas conventional roadway lighting needs are based on illuminance – foot candles on the pavement – tunnel lighting specifications are based on luminance – light reflected off the various tunnel surfaces at a fixed angle and distance, into the drivers’ eyes. This is because drivers’ eyes must adapt to the potentially rapidly changing light levels from outside to inside the tunnel, and back outside again.

Lighting at the tunnel entrance, therefore, must be strong enough to overcome the “black hole” effect motorists experience when traveling from a very bright daytime external light level to a comparably darker level. It should also be designed so the driver is able to detect any obstacle from a distance equal to the stopping distance from the tunnel portal (Safe Stopping Distance), so that within the time corresponding to that distance, the driver is able to achieve visual temporal and spatial adaptation.

At night, the lighting challenge is relatively simple and consists of providing luminance levels to light the routes inside the tunnel at least equal to those outside the tunnel. However, studies performed on exterior lighting indicate that at low, nighttime light levels some [light]sources appear brighter because of their color temperature. Metal halide (MH) lamps can appear twice as bright as high-pressure sodium (HPS) lamps at the same light level due to their white color.
Research has shown a correlation between pupil size and color temperature. The cooler light sources such as MH cause pupils to shrink more than warmer sources such as HPS. Smaller pupil size increases visual depth of field and visual acuity. Increased depth and brightness perception can affect safety. 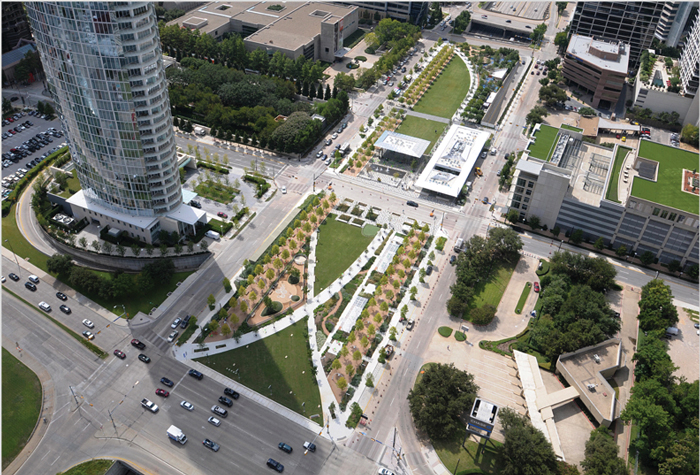 Klyde Warren Park celebrated its grand opening in October 2012 and is an essential link between the city’s uptown, downtown and art districts.

Other Considerations
Additional factors must be considered when designing an ideal tunnel lighting system. Varying road surfaces influence luminance values and the speed of traffic affects light levels. The amount and angle at which the sunlight enters the tunnel with respect to the roadway’s compass direction must be considered. The quality, type, maintenance requirements and average annual daily traffic volume are also critical in the selection of lighting systems.

The Weather
Tunnels are generally characterized as “aggressive” environments that demand luminaires with a rigorous mechanical design and construction. In road tunnels, traffic exhaust fumes generate a high level of pollutants and a highly corrosive atmosphere, particularly when combined with humidity and radical swings in temperature over time. High levels of alkaline or acid pH and galvanic coupling may result, and tunnel luminaires are, therefore, confronted with all types of corrosion including chemical, bacteriological and electrolytic.

For these reasons, in these very specific environments, specifiers should strongly consider stainless steel tunnel fixtures that are resistant to such extreme environmental conditions. Also, tunnel lighting fixtures are often exposed to high-powered water jets from DOT maintenance vehicles that are regularly washing down the tunnel walls and fixtures. As such, tunnel fixtures should be rated for both Ingress Protection (IP) – at a minimum rating of IP66 – and American National Standards Institute (ANSI) Standard C136.27 Water Spray Testing.

Vibrations
As vehicles pass through a tunnel, the luminaires are subjected to intense vibrations from wind tunneling effects. To withstand this, fixtures should be specified that systematically go through ANSI Standard C136.31 vibrations tests to ensure they will withstand such expected vibrations in a tunnel environment.

Tunnel luminaires should also withstand shock resistance tests. Stones and other objects propelled by vehicles passing through the tunnel and vandalism must be considered when specifying tunnel luminaires. IK (impact protection) Ratings, at a minimum IK08, should be adhered to.

Fires
The durability of tunnel luminaires during fires is very important. In the event of a tunnel fire, luminaires must work long enough for emergency workers to reach the emergency egress shelters and intervene. To avoid emitting toxic fumes during a fire, fixtures must also utilize low-smoke/zero halogen materials. See National Fire Protection Association (NFPA) 502 for more information.

Lighting Technologies Overview
Most North American roadways and tunnels are illuminated using HID light sources such as high pressure sodium and metal halide. Other technologies are also available, including LED, fluorescent, induction, and low pressure sodium. The choice of the appropriate light source for a specific tunnel should be determined by prioritizing and evaluating various lighting technologies using the following criteria, as referenced in the ANSI/IES RP-22-11 document. 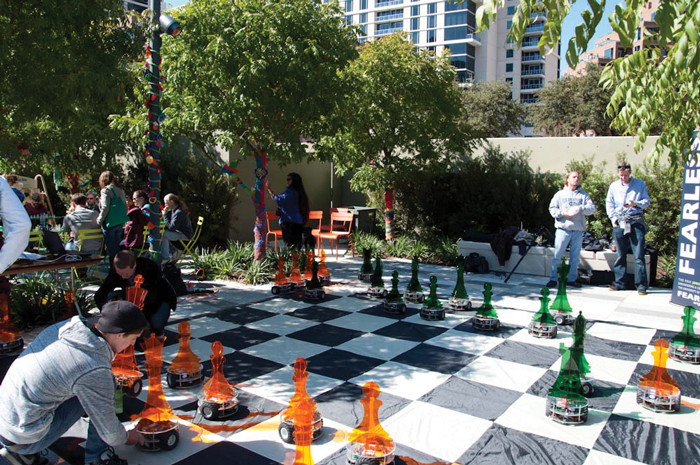 “Green” features include solar panels on the light poles, a high-efficiency lighting-management system, and a water reclamation and purification system. The park’s 322 trees may sequester as much as seven tons of carbon per year at maturity, in addition to mitigating storm-water runoff and urban heat island effects.

While the concept of building a deck park over Dallas’ Woodall Rodgers Freeway may have originated in the 1960s, when then-Mayor J. Erik Jonsson decided to recess the freeway, it didn’t come to fruition until construction began in October 2009. The Klyde Warren Park celebrated its grand opening in October 2012 and is an essential link between the city’s uptown, downtown and art districts.

This $110 million project is unique because it’s a bridge, of sorts, at times being described as a combined bridge, park and tunnel design all in one.

Construction
Designing a deck structure that could support weight across a 200-ft wide freeway posed a huge challenge. There were only so many places to put support columns, so Atlanta, Ga.-based general contractor Archer Western constructed them behind the existing walls in most areas. A center support was built in the middle of the freeway. It took a year to install the cross beams, which were placed in tandem by two cranes aligned on either side of the bridge.

Much of Woodall Rodgers now runs unseen, enfolded in a 1,200-ft tunnel to create a center of calm just blocks away from the heavy swirl of traffic on the interstates and Central Expressway. Dallas has orchestrated a new means of putting green over the hardtop of downtown Dallas where Klyde Warren Park—a five-acre deck-park and free outdoor destination in the center of Dallas—now sits atop the subterranean Woodall Rodgers Tunnel.

Additionally, more than 1,800, 400-watt Kenall CFT Series metal halide fixtures with sensors are installed along the tunnel’s sides and remain on during daytime hours. The installed system automatically adjusts the amount of lighting inside the tunnel based on ambient light levels just outside the tunnel.

Walker specified Kenall luminaires because the fixtures are able to provide the required lighting performance while also withstanding this challenging transportation environment. The lighting system was specifically designed to use whiter light sources, so as to improve visibility for the drivers within the tunnel. The Kenall fixtures are IP66 Rated, and met all specified ANSI and NFPA Test Standards for the project. The Kenall fixtures also utilize stainless steel housings and tempered glass lenses, so as to withstand the extremely aggressive conditions and the corrosive atmosphere within the tunnel for many years to come.

Michael   N.   Maltezos,   MIES, is transportation sales manager with Kenall. He can be reached at mmaltezos@kenall.com. 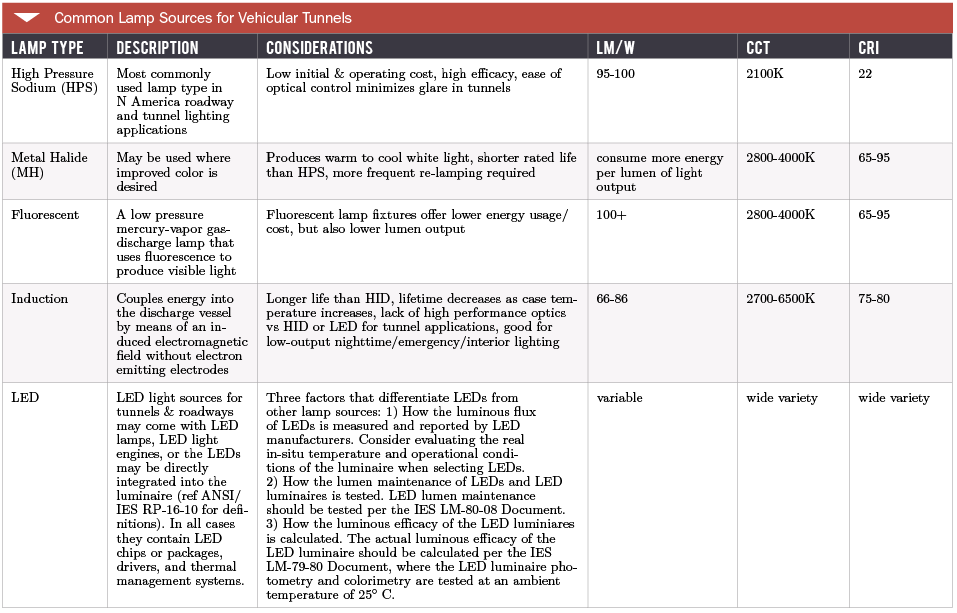