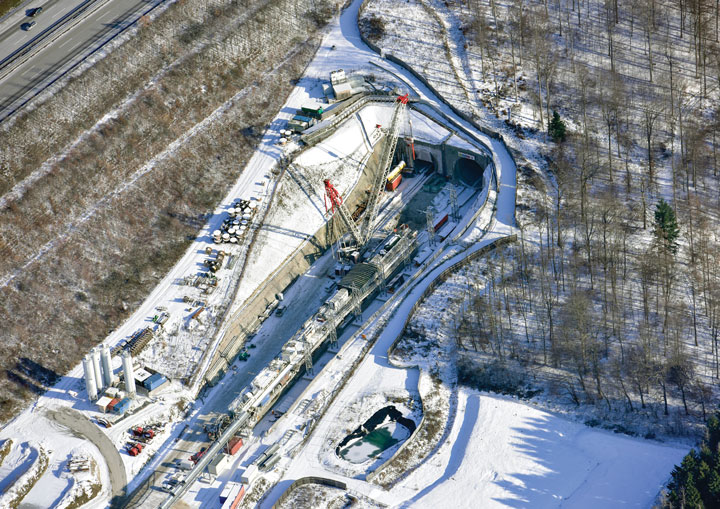 Assembly of the TBM at the Portal West (Aichelberg) of the Bossler Tunnel in January 2017 (Credit: Arnim Kilgus)

Overview of some Projects in Scandinavia, Denmark and Germany

In 2016, TBM published an overview of tunneling projects in Europe and their various stages of planning construction. The progress is going on, and some important tunnel routes have begun operation, helping to connect each part of the European Union. In this article, we highlight developing projects in northern Europe.

In nearly every European country some tunneling projects are underway, notably the Trans-European Network for Transport (TEN-T) projects, which experienced further progress because the second generation of the work plans of the 11 European Coordinators were approved in December 2016 and established the basis for action until 2030. (For more information, click here.)

With the TEN-T program, the member countries of the European Union (EU) are realizing a more reliable and coherent network for transport in Europe. Challenges exist related to dealing with security and international resettlement, as well as financial challenges including Brexit, but the European idea is to keep pushing forwrd.

One of the first tunnel projects with TBMs in Norway, which has historically been dominated by drill-and-blast, is the Follo Line between the capital Oslo and the city of Ski to the south. This is one of the largest infrastructure projects and one of the longest railway tunnels in this western Scandinavian Country. The Follo Line Project is divided into four sub projects for civil works:

Four large double-shield TBMs with 9.9-m diameter from Herrenknecht will each excavate approximately 9.5 km of the main tunnel section. The first of four TBMs to build the 20-km long twin-tube tunnel of the totla 22-km long Follo Line was launched in September 2016 heading toward Oslo, followed by the launch of the second TBM in October. The third and fourth machine started towards Ski in late 2016. Construction started in 2015 and will be completed for operation in 2021. As of mid-February 2017, the four TBMs have excavated almost 4.5 km of tunnel, which is over 10% of the total. The new section of the high-speed connection will reduce the traveling time from 22 to 11 minutes.

Double-shield TBMs are among the most technically sophisticated tunnel boring machines. They combine the functional principles of gripper and single-shield TBMs in one machine. In stable geological conditions, combining these methods permits the installation of concrete segments parallel to the drive, resulting in high performance rates. The powerful technology is thus ideal for driving long tunnels in hard rock. For the Norwegian granite with up to 350 Mpa, Herrenknecht equipped the four machines with 265-tooth, hardwearing cutterheads.

In July 2017, the 6-km long stretch of the Citybanan Rail Tunnel in Sweden’s capital Stockholm will start operation after eight years of construction and will double the track capacity. The six tunnel sections, as well as an escape and service tunnel, were excavated with drill-and-blast. The maximum overburden is 40 m. The commuter train tunnel with two tracks runs between Tomteboda in the North and Stockholm South Station, with two new stations at Odenplan and T-Centralen. The rail link from north to south includes a sophisticated immersed tunnel section under the Riddarfjärden Bay.

The Fehmarnbelt Fixed Link is a planned 18-km immersed tunnel between Rødbyhavn in Denmark and Puttgarden in Germany, making it the longest immersed tunnel in the world. It comprises a four-lane motorway and dual track electrified railway. The project also includes upgraded rail and motorway connections from Ringsted to Rødby in Denmark and from Puttgarden to Lübeck in Germany.

The construction of the tunnel between Denmark and Germany will be carried out in several phases over a number of years (Fig. 1). Comprehensive planning work, along with feasibility and environmental studies, have been carried out in connection with preparations for the construction of the Fehmarnbelt tunnel. The construction of the tunnel and associated landworks will begin when final approval of the project is received from the Danish political parties supporting the project, when contracts have been signed with the contractors and when the German authority’s approval is available. The project is divided into several phases.

The land areas will be created on an ongoing basis as the soil from the seabed is dredged. On both Lolland and Fehmarn, they will generally extend around 500 m into the Fehmarnbelt. This is about the same distance from the shore as the piers of the existing ferry ports at Rødbyhavn and Puttgarden.

The Fehmarnbelt link will be the world’s longest immersed tunnel, but the techniques are proven. The Øresund tunnel was built in the same way. 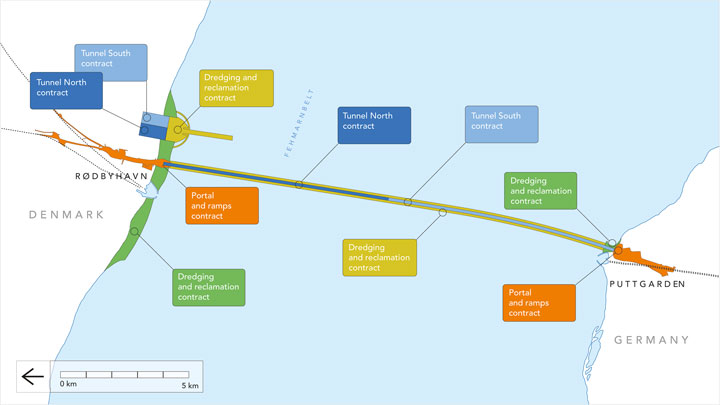 The Fehmarnbelt Fixed Link between Denmark and Germany and the Brenner Base Tunnel between Austria and Italy are both record-breaking European mega projects that will play a vital role in the future European transport network. In September 2016 representatives from the project companies, and members of the two regional development organisations, STRING and Brenner Corridor Platform, signed an agreement of mutual cooperation.

Both projects have been designated priority projects by the EU Commission, as they aim to remove bottlenecks that impede trade, growth and cross-border cooperation, and promote faster, more efficient and environmentally friendly transport of passengers and freight across Europe. The Fehmarnbelt Fixed Link and the Brenner Base Tunnel face different technical obstacles – one crosses a sea and the other a mountain range – but they share many of the same challenges that very large infrastructure projects experience when it comes to interaction with the surrounding communities and compliance with the legal and regulatory framework in two different countries.

The agreement will allow the two projects to share experiences and learn from each other. This applies to both technical and scientific innovations, communication initiatives and joint projects by the employees of the two projects, where cooperation will be mutually beneficial. 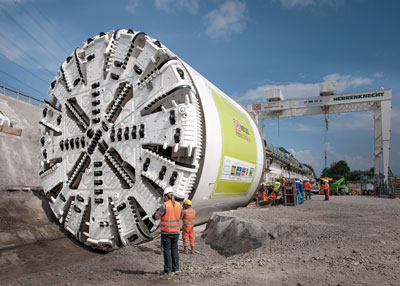 Brenner Base Tunnel between Austria and Italy

The Brenner Base Tunnel (BBT) is a 64-km dual track railway tunnel through the Brenner Pass. The BBT will be the longest underground railway connection in the world. It will run from Innsbruck in Austria to Fortezza in Italy, replacing the current railway.

The Stuttgart-Ulm railway project is part of the west to east TEN-T European main line from Paris, France, to Budapest, Hungary. It is divided into the two major projects “S21 – restructuring the Stuttgart rail node” with the construction of the new main station underground, and “NBL – the New-build Wendlingen-Ulm line.” It is the largest upgrading concept for public rail transport in the German state of Baden-Württemberg since the 19th century and also one of the biggest projects in Germany. With construction of the main station as a through station and the connection to the European high-speed network, the travel times in regional and mainline services will be shortened significantly.

A total of 60 km of new railway line and three new stations – Stuttgart Main Station, Flughafen/Messe for the airport and trade fair grounds, and Mittnachtstraße rapid transit station in the new Rosenstein district – will increase the capacity of the Stuttgart rail node. The city’s main station will be converted from a terminus into a through station, but the historic station, with its striking passenger building, tower and colonnades, will be integrated with the new structure. The new Flughafen/Messe station will link the region to the south of the city to long-distance and regional transport routes.

The project will open up unique urban development opportunities in Stuttgart: tracks that now slice the urban fabric in two will give way to a new neighborhood right in the center of Stuttgart. This will create more green space, new housing and jobs.

For the twin-tube, 9.5-km long Filder Tunnel from the new Stuttgart main station up to the Filder Plain and the airport, Herrenknecht supplied a convertible multi-mode TBM with a shield diameter of 10.83 m (Fig. 2). In the upper section of the Filder Tunnel, it works in closed mode with screw conveyor while the lower section involves open mode with conveyor belt discharge. This is because of the varying layers of rock: the machine has to penetrate sandstone with marls and clays and nodular marl as well as unleached gypsum keuper. It overcomes an altitude difference of 155 m with a gradient of up to 2.5%. Only in about half of the tunnel, in the geological transition zone, the machine will not be used. There miners will remove the material from inside the mountain using diggers and loosening blasting. The heading toward the main station started in November 2014 and one year later in November 2015 the first phase of construction in the eastern tube was successfully completed. The machine was then disassembled in the tunnel. After refurbishment, the second of a total of four advances in the parallel western tube started back toward the main station.

The total length of the line is 57 km with 20 km of high-speed track (max. speed: 250 km/h) and 33 km of tunnels and cut-and-cover. The whole stretch consists of 16 tunnels and cot-and-cover, 18 bridges, three stations and 1 stabling siding. The inauguration is planned for 2021.

The New-build line from Wendlingen to Ulm takes the form of high-speed tracks running along the A8 motorway. The New-build line represents a fast, convenient connection over the hills of the Swabian Alb, and it will substantially cut regional, national and international journey times. Moreover, it will provide the state of Baden-Württemberg with a permanent link to Europe’s high-speed rail network.

Under the Swabian Alb towards Ulm, with overburdens of up to 250 m, a Herrenknecht EPB Shield with 11.34-m diameter is driving the 8.8-km long twin-tube Bossler Tunnel. It is the railway tunnel with the largest diameter excavated in Germany to date using mechanized tunneling technology. The TBM started in April 2015 and made the first breakthrough in November 2016. Tunneling progressed so quickly that the decision was made to drive additional sections with the TBM that were originally planned to be built using conventional methods (Fig. 3).

By Dipl.-Ing. Roland Herr, TBM correspondent for Europe and Southeast Asia, is a freelance journalist and author. He can be reached at herrroland@t-online.de.