You are at:Home»Featured Stories»Megaprojects in Europe – Crossing Borders, Connecting Markets 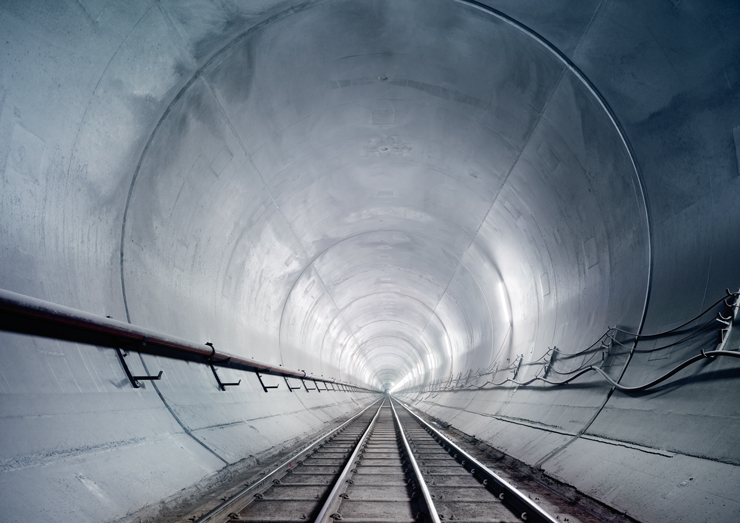 While Europe has been challenged in recent times with problems related to absorbing refugees, it has been successful in improving its infrastructure through the Trans-European Network for Transport (TEN-T). The world’s biggest infrastructure project is simultaneously crossing geographic and political borders, connecting economic markets and trade mega centers while combining different European cultures.

The Trans-European Network for Transport (TEN-T) has become increasingly important since the establishment of the European Union (EU), which was formally inaugurated on Nov. 1, 1993. This politico-economic union has 28 member states and enables free movement without border control and using the 1999 established EURO in 19 member states as legal tender.

With this new integration, the idea of connected European markets grew. One of the most important fundaments to realize that is the European investment in a modern high-performing infrastructure in the fields of transport (railway, road and water ways), energy and communication technologies. Therefore, there is a basic plan and also a core network plan for the most important bottlenecks and cross-border projects.

For transportation, there are nine European corridors, east-west and north-south, carrying freight as well as passengers. The cost of developing European infrastructure and to complete the TEN-T core network requires about €500 billion ($550 billion). Of this, €250 billion ($275 billion) will be used for removal of the main bottlenecks up to 2020. That means, main works on modal integration, interoperability and coordinated development of infrastructure – in particular cross-border sections and bottlenecks – are financially supported by Europe.

The following gives an overview of the different corridors and the core infrastructure projects in between these. 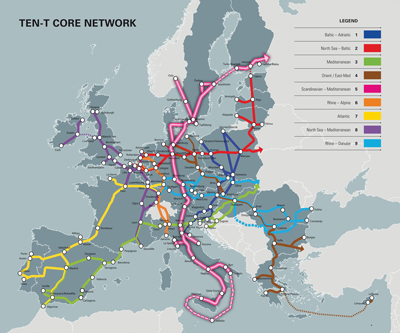 This 2,400-km (1,500-mile) long first corridor will provide better access to Baltic and Adriatic seaports for the economic centers in Poland, the Czech Republic, Slovakia and Austria. The main missing links are the cross-border sections, the 27.3-km (17-mile) long, double-tube Semmering (works started in April 2012 and operation will begin 2026) and the 32.9-km (20.4-mile) long Koralm (construction started 2008 and 2023 operation will begin) tunnels in Austria for the Alpine crossing.

The second corridor with the Eastern Shore of the Baltic Sea will be connected with the ports of the North Sea starting at the modern harbors on the Gulf of Finland in Helsinki and Tallinn, passing the three Baltic States and northern Poland until Warsaw. The traditional east-west corridor to Lodz, Poznan and Berlin, ending in the ports of the North Sea coast, will be integrated. This corridor provides modern transport between Finland, the Baltic States, Poland, Germany, the Netherlands and Belgium. Especially the cross-border operational systems for road and railway needs to be modernized and developed.

The about 3,000-km (1,860-mile) long third corridor links major European areas with high-speed trains from the western Mediterranean region up to the Ukrainian border with Hungary following the coastlines of Spain and France, crossing the Alps to the east through Italy, Slovenia and Croatia. One of the well-known missing links is the new 140-km (87-mile) long cross-border rail link between France and Italy, Lyon-Turin, with eight tunnels totaling 86 km (53 miles). Challenges with this corridor include the coexistence of two different gauges. In 2008, the 621-km (386-mile) long high-speed line opened between Madrid and Barcelona, reducing travel time from 5 to 2 hours 38 minutes and changed traveling from air and road to railway.

The Orient/East-Med Corridor, running northwest-southeast, optimizes the use of the ports and the related motorways from Central Europe with the maritime interfaces in the North, Baltic, Black and Mediterranean Seas. This corridor use rivers like the Elbe and provides a link to Cyprus. In this corridor is still a lot to do on building or upgrading multimodal connections between Hungary, Bulgaria, Romania and Greece. Cross-border traffic management systems on rail and inland waterways are to be implemented on many sections. 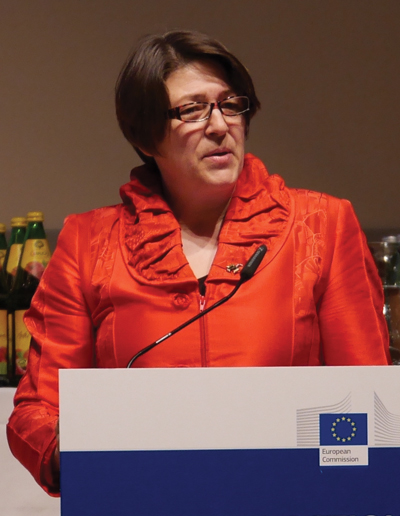 The fifth and longest of the core network corridors is a crucial axis for the European economy and links the major urban centers in Germany and Italy to Scandinavia and the Mediterranean. The 64-km (39.8-mile) long Brenner Base Tunnel (the longest underground railway tunnel worldwide) and the Fehmarn Belt Crossing with a 17.6-km (10.9-mile) long immersed tunnel are the most important key components of the cross-border bottlenecks in this corridor.

The route starts at the Finnish-Russian border, passing Helsinki, Stockholm and Malmö arriving at the European mainland to continue to the German seaports Hamburg and Rostock, following the major traffic flows in the west of Germany via Hannover to the eastern part to Berlin and Leipzig. Sections from east and west meet in Nuremberg to go to Munich, via the Brenner Base Tunnel to Verona. In Italy the corridor continues via Bologna, Rome, Naples, the ports of Genova, Livorno, Bari and Taranto arriving in Palermo. The last section connects Italy with Malta via motorways of the sea. Main projects like Oresund fixed link (bridge and tunnel combined with two-track rail and four-lane road) between Sweden and Denmark, as well as Milan-Rome-Naples high-speed line (with completion of Bologna-Florence section) are under operation. The Fehmarn Belt Crossing will replace the existing bottleneck ferry line with the construction of a new immersed rail and road tunnel under the 19-km (11.8-mile) wide Fehmarn Strait between Puttgarden in Germany and Rodby in Denmark.

This sixth, north-south corridor is one of the busiest freight routes in Europe, connecting the North Sea ports of Antwerp and Rotterdam via Switzerland to the Mediterranean Basin in Genoa and some major economic centers in western Europe. The multimodal Rhine-Alpine Corridor (including the Rhine basin) also provides connections to several east-west axes. In between this corridor are some main missing links to close: the bottlenecks in Germany and Italy with required upgrade of capacity, better interconnection between Belgian and Dutch to German networks (Emmerich-Oberhausen), progress of access routes to Swiss Tunnels on European Union Territory (Karlsruhe-Basel and Milan-Novara). Latest 2020 flat trajectory for rail freight through the Alps will be possible because start of operation at Gotthard and Ceneri Base Tunnels (15.4 km (9.6 miles) long). The 143-km (89-mile) long two-track railroad Betuwelijn between Rotterdam harbor and the German border has been in operation since 2000. The 35-km (21.7-mile) railway Lötschberg Base Tunnel of the AlpTransit Project (Switzerland) is actually the world´s longest passenger and freight land tunnel. Also part of the AlpTransit Project, but still under construction, is the 57-km (35.4-mile) long railway Gotthard Base Tunnel with planned start of operation end of 2016.

For the continuity of the Lisbon, Madrid, Paris and Strasbourg/Mannheim network, this seventh diagonal corridor links the high-speed and parallel conventional rail lines of the Iberain Peninsula with France and Germany. The idea of this corridor is to move the freight transport from road and air to railway. In this corridor the connection of all the different ports is crucial. Main missing links are between Lisbon and Madrid, Porto and Valladolid, and San Sebastian and Bordeaux both road and railway. In June 2011, the Tours-Bordeaux high-speed rail line started operation as a public-private partnership (P3) project financed with help of the European Investment Bank. This was the first high-speed rail line P3 ever signed in France.

The eighth, multimodal North Sea-Mediterranean Corridor stretches from Ireland and northern United Kingdom, via the Netherlands, Belgium and Luxembourg, to the Mediterranean Sea in southern France, offering better services for freight as well as for passengers. This corridor utilizes a lot of waterways as part of the concept, e.g. Seine-Scheldt, Rhine-Rhone and Canal Seine-Escaut. In Ireland and the United Kingdom rail connections still missing, e.g. between Belfast and Dublin or Dublin and Cork, being developed under the “DART” project.

Belgium, France, Germany, the Netherlands and the United Kingdom (London-Brussels-Amsterdam-Cologne-Paris). The Channel Tunnel is an important part of this cross-border connection moving from air and road to rail. Also under operation are high-speed lines between Lyon and eastern France, Switzerland and Germany. A second phase with 50 km (31 miles) of construction started 2014.

This main east-west ninth corridor is linking all continental European countries along the Main and Danube Rivers to the Black Sea by improving high-speed rail and inland waterway interconnections from France and Germany to Austria, the Czech Republic, Slovakia, Hungary, Romania and Bulgaria.

Dipl.-Ing. Roland Herr is an international freelancing journalist and author, with particular emphasis on Europe and Southeast Asia. He can be reached at herrroland@t-online.de.