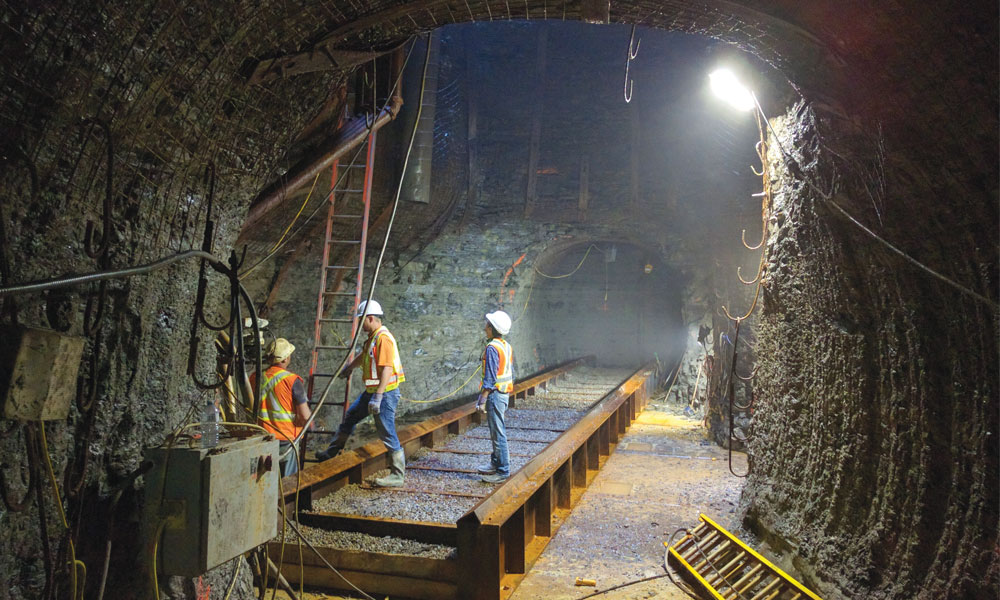 The West Trunk sewer twinning project consists of approximately 9.34 km of 3.023 m rock tunnel located up to 52 m beneath Erin Mills Parkway in Mississauga, Ontario. The tunnel was excavated using a Robbins main-beam tunnel boring machine (TBM) and was expected to be driven through the Georgian Bay Formation’s blue-gray shale.

The primary tunnel rock support included rock bolts, steel channel arches and timber lagging. The blue-gray shale is overlain by the Queenston Formation’s brownish-red shale with cohesive and granular deposits atop this. The final lining is 2.4 m ID CIP concrete.

Two fault zones were located approximately 575 m and 1.5 km from the TBM launch shaft at depths and lengths of about 22 m and 20 m, and 36 m and 60 m, respectively. Dewatering, probe drilling and grouting and full steel sets were employed to navigate these fault zones.

A third fault zone was encountered approximately 5.16 km from the launch shaft and 350 m short of the next shaft, S8. The project team attempted to continue forward using the same process as the previous fault zones, however significant water inflow ceased advancement. The geotechnical data suggested significant rock cover throughout this section of the tunnel drive, though the two nearest boreholes were approximately 1.7 km apart.

Additional boreholes drilled to the TBM invert elevation confirmed the existence of a subterranean valley rather than a relatively short fault zone as previously encountered. The tunnel alignment consisted of cobbles and boulders infilled with sand, silt, and clay overlain by dense sand. A jet grout block was considered to advance the TBM through the valley as it would provide a competent tunneling medium, both for thrusting against and for initial roof support. Unfortunately, further boreholes indicated that the valley is more than 100 m in width at the tunnel elevation. The length and breadth of the requisite jet grout block was deemed economically infeasible.

It was decided that a soft-ground TBM would be employed for the drive from S8, back toward the northbound tunnel face. The nearest open shaft was approximately 2.85 km behind the TBM and so a recovery shaft was excavated roughly 220 m from the face. This location allowed it to be excavated into competent rock as well as to minimize the effect on traffic through the intersection of the two arterial roads the TBM had stopped beneath.

The recovery compound was laid out within the confines of the two left-turn lanes and median along northbound Erin Mills just south of Britannia road. To accommodate this narrow compound a 6.0-m by 8.0-m elliptical shaft was constructed to a depth of approximately 50 m. 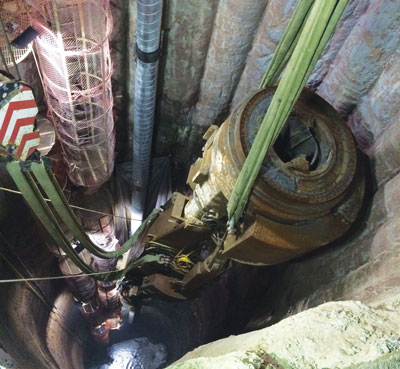 Once extracted, the Robbins TBM was completely serviced to prepare it for the remaining 3.07 km of its northbound drive, including the fabrication of a new cuttinghead to improve the machine’s cutting and excavating efficiency.

One of the major challenges in tunneling out of S8 is that it was designed for use as a mucking shaft and not intended for TBM assembly or launching. The clear diameter measured as little as 5.8 m. To overcome this, a cavern was carved out of the rock at the base of the shaft including 48.5 m northbound and 9.2 m southbound starting tunnels.

A Lovat 3.277 m earth pressure balanced machine (EPBM) was being prepared for a 390 m drive near the northern end of the project and was chosen for the drive from S8 to the recovery shaft. Although the EPBM was originally designed to construct a 2.744 m ID concrete segment tunnel, it was being outfitted with a thrust ring for use with steel ribs and timber lagging.

With no overhead crane access in the cavern, a stationary, base-mounted launch frame was selected. Such a frame was readily available, however it was previously designed for and used with two 6.2 m Caterpillar EPBMs. The frame was modified to accommodate the smaller TBM while the overall design and connections were preserved. 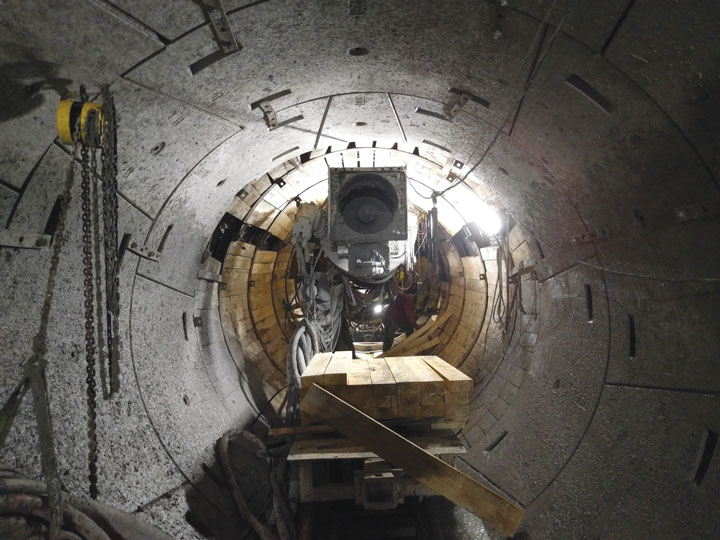 Back of EPBM in short-launch mode just beyond the transition from concrete rings to ribs and lagging.

The TBM backup gantries were lined up in the northbound starting tunnel while the TBM itself was lowered shell-by-shell and pulled forward into the southbound starting tunnel where assembly for a short-mode, umbilical launch was completed. The launch frame was assembled behind the machine and a steel ‘dummy’ ring was erected within the trailing shield. 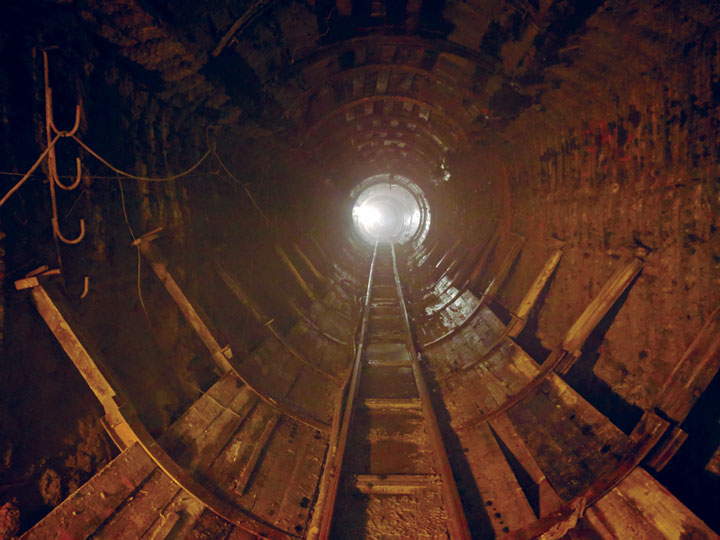 To reduce the tunnel lining costs, steel and timber sets were used as the primary lining through the competent rock. An adaptor ring was mounted to the leading edge of the eighth concrete ring which accepted the timber lagging from the first steel rib transferring the thrust back to the launch frame. The thrust pads were replaced by a segmented thrust ring. No tail brushes had been installed prior to launch.
The rock was excavated in open mode with an average daily advancement of 7.7 m. With enough bored tunnel behind the TBM, the transport beam and unloading stations were installed, and the backup gantries were pulled across the cavern into the tunnel and connected to the TBM. Muck-cars were hoisted through the open tops of the gantry cars until the entire TBM was buried.

After 158 steel and timber sets – approximately 193 m – the TBM was converted back to erecting segments to traverse the valley. The transition between support systems occurred prior to tunneling beyond the competent rock and required another steel adaptor ring to be installed between the ribs and segments which included a built-in steel bulkhead to allow for grouting behind the concrete rings. The thrust pads and tail brushes were also installed.

A compressible cellular grout was used as annular backfill through the remaining length of rock to allow adequate release for any in situ stresses. Typical backfill grout was used through the valley for improved ring support and to better resist wash-out.

The wear on the cutting tools during the rock excavation resulted in slow soft ground excavation, averaging just over one concrete ring per shift. The average EPB pressure during the submerged drive was 1.5 bar. Additionally, steering the EPBM through the boulder-filled valley had become difficult due in part to the worn cutting tools.

An alpine miner was used to widen the 220 m of 3.023 m tunnel north of the recovery shaft allowing the EPBM to push itself toward to the recovery shaft without any obstructions in the previously completed tunnel. Advancement was achieved by building and thrusting against only the bottom thirds of steel and timber sets.

With the subterranean valley bridged, the Robbins TBM was relaunched and is currently tunneling north from S8. The Lovat EPBM has been extracted and is currently being serviced, including the fabrication of a rock cutting head to improve its rock and mixed-face excavation efficiency. Additional locations with questionable rock cover were discovered through an expanded geotechnical investigation and so the EPBM will be relaunched for two more drives, 390 m and 760 m, constituting the northern end of the project.
Throughout the noted works, the engineering designs – including shaft and tunnel ground support, and structural and mechanical items – were completed by McNally Construction’s in-house engineering department.

Editor’s Note: This article originally appeared in the Fall 2017 issue of Trenchless Technology Canada, a sister publication to TBM.