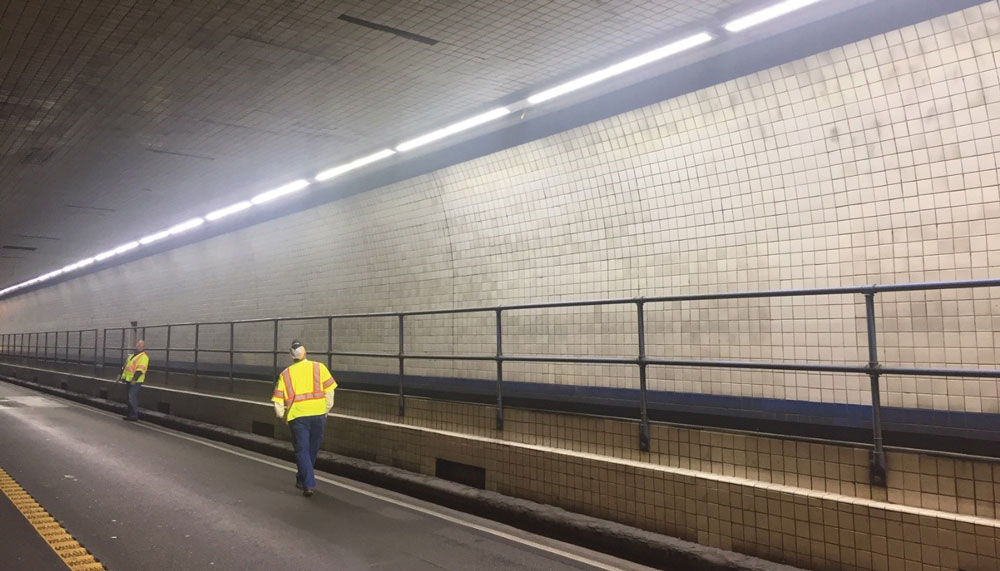 After a successful mockup trial period, and a thorough review of Kenall’s submittal package and certified test reports for the new luminaires, the CBBT approved them for the tunnels’ Interior Zones.

Since its opening in 1964, the Chesapeake Bay Bridge–Tunnel (CBBT) has not only been regarded as a critical travel route, bearing approximately 4 million vehicles per year, but also as a modern engineering wonder. The CBBT is a 17.6-mile (28.3 km) bridge-tunnel crossing that connects Northampton County, Virginia, on the eastern shore, with the communities of Virginia Beach, Norfolk, Chesapeake, and Portsmouth on Virginia’s western shore. It is the world’s second-largest bridge-tunnel complex, allowing critical military and shipping traffic to move unimpeded from the Thimble Shoals and Chesapeake shipping canals to the Atlantic Ocean. [1] [2]

The CBBT is a complicated (and expanding) combination of approximately 12 miles (19 km) of trestle, four high-level bridges, four artificial islands, two 1-mile-long (1.6 km) underwater tunnels, 2 miles (3.2 km) of causeway, and 5.5 miles (8.9 km) of approach roads. While construction on a new parallel tunnel to ease traffic is getting underway, the two existing 1-mile-long (1.6 km) tunnels needed an equipment overhaul due to aging infrastructure. Consequently, the CBBT began a three-year project to restore and improve these tunnels’ critical systems and facilities, including lighting. 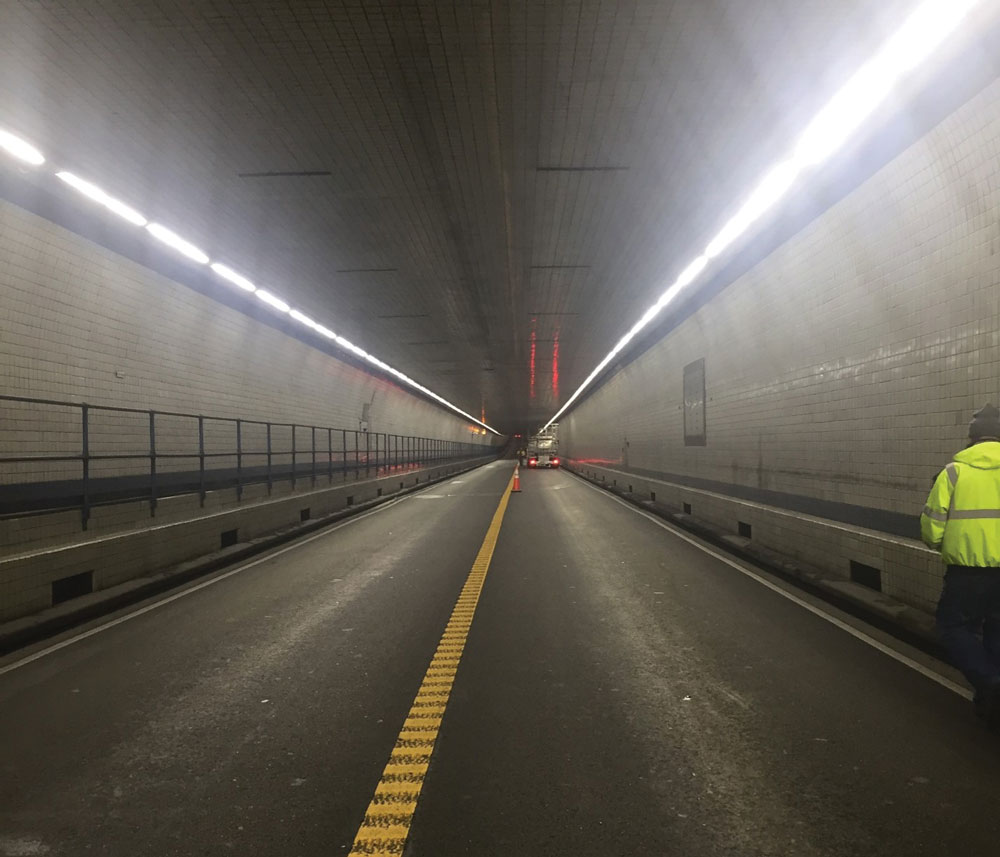 The final installation is nearing completion, meets all project requirements and looks great.

The CBBT’s Director of Maintenance, Tim Holloway, described the new LED lighting systems as “a long overdue solution to highly repetitive and costly tunnel re-lamp lane closures, with savings on power consumption being the icing on the cake.” Furthermore, Holloway continued, “The product we needed simply did not exist. Kenall worked hand in hand with us to develop the product and then further refine it in the field to make sure all our needs were met.”

Chase Sturgis, the CBBT’s Electrical/Mechanical (E/M) Superintendent, agreed: “Replacing the existing fluorescent tunnel lighting fixtures with new LED fixtures manufactured by Kenall has been a rewarding achievement of the CBBT’s Maintenance Division. The collaborative effort, from procurement to commissioning this project, ensures the CBBT is taking steps in the right direction to keep pace with an evolving industry – all while reducing energy consumption in today’s modern world.” 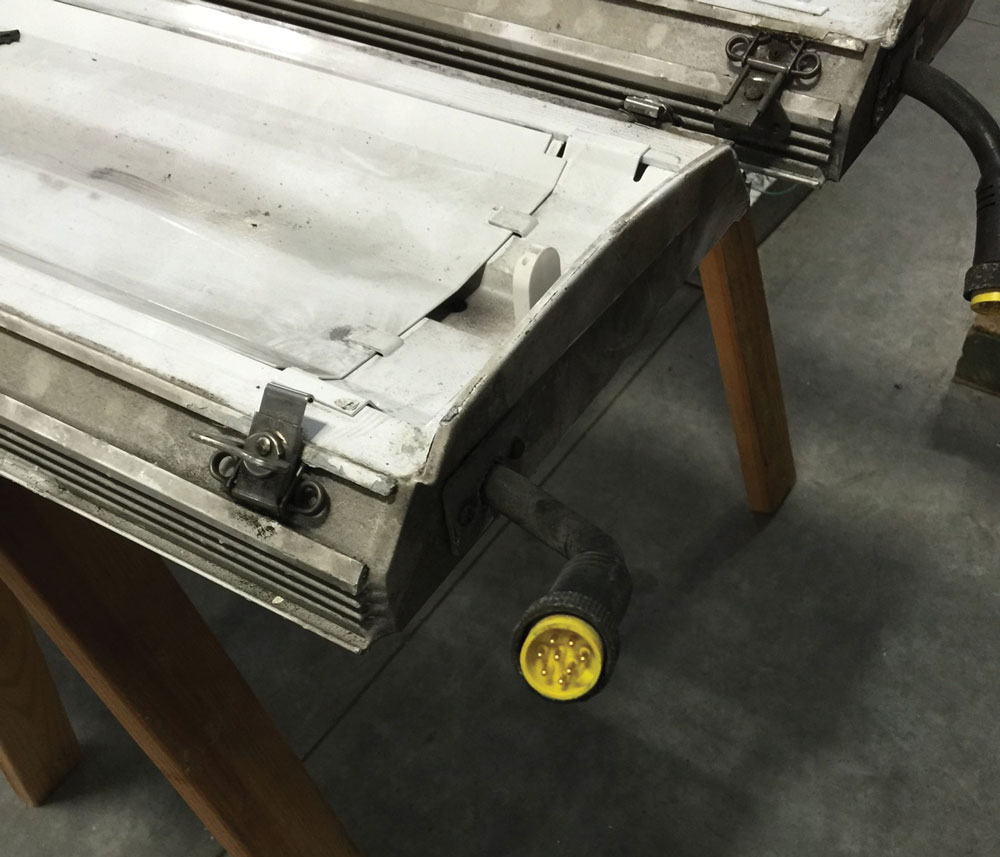 In order to be re-fed from the adjacent existing wire way on the ceiling deck, the LED replacement luminaires had to include cord sets to match those currently plugging the existing wire way.

The existing linear fluorescent tunnel luminaires were replaced one-for-one with 2,835 Kenall LuxTran LTLI-8 LED tunnel luminaires. With these new fixtures, the CBBT will save $500,000 per year in maintenance costs and energy consumption, as well as reduced traffic congestion. Michael Crist, the Deputy Director of Infrastructure for the CBBT, emphasized the important of these savings. “Prior to installing LED lights, we had a one-week-per-month lighting detail, requiring a tunnel lane closure, with three to four operations personnel, and three or four maintenance personnel, to replace light bulbs. Eliminating this detail is a huge cost savings and a big safety improvement,” he said.

With this installation complete, the CBBT now has high-quality, corrosion-resistant, certified fixtures that will last for decades – far beyond the point of return on investment.

To get more details about the project, we sat down with Kenall’s Transportation Sales Manager, Michael Maltezos for a detailed Q&A. 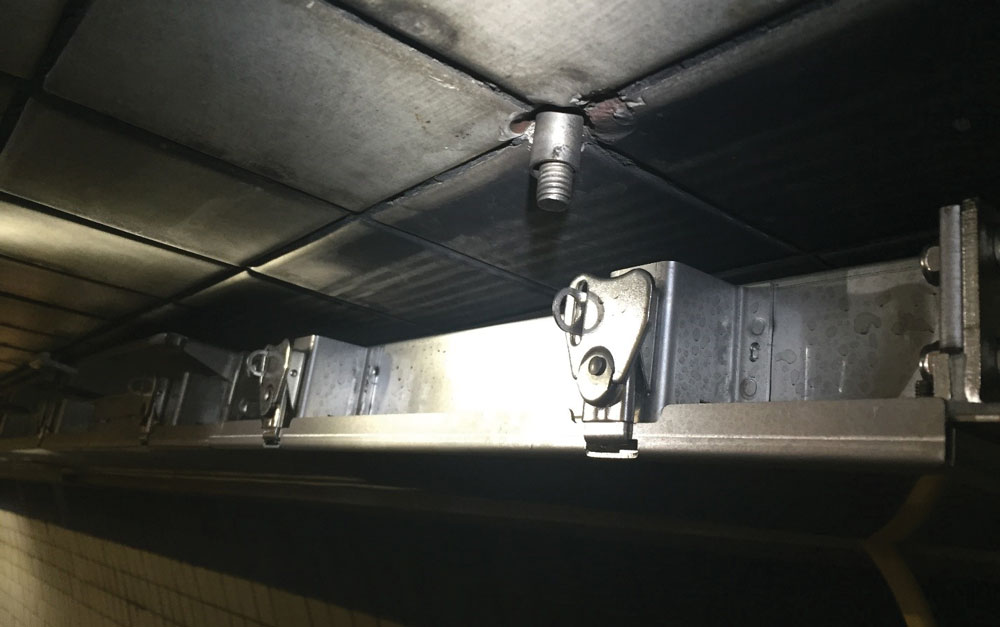 Kenall designed custom heat sinks for the LED drivers to mitigate the heat.

What are the specific benefits of the new LED tunnel lighting system?

There are several benefits, including:

Additionally, we improved the existing fixtures’ shallow profile, to prevent trucks from hitting and damaging the fixtures due to the very low ceiling clearances (as continually happened to the existing fluorescent fixtures.) It drastically reduces the number of frequent nightly maintenance details required to keep the tunnel illuminated. This reduction provides a safer work environment for CBBT employees, as well as the traveling public. It also provides CBBT personnel the opportunity to perform other preventative maintenance work necessary to the facility.

What challenges did you have during this lighting replacement?

The LED replacement luminaires had to provide the required light output in all the various tunnel zones, without overheating. This was no small feat, particularly in the threshold zones where the new LED fixtures replaced existing 500W fluorescent luminaires. Higher-output LED fixtures inherently produce heat, particularly in a ceiling-mounted application; additionally, the replacement fixtures required a shallower profile (less than 3-in. total!) than the existing fixtures. Obviously, this was a huge concern. In fact, at the time of design, no luminaire manufacturer, including Kenall, could make such a shallow-profile, high-output LED tunnel fixture that would pass a heat test in a ceiling-mounted application without substantial heatsinking … until now.

How were these challenges overcome? 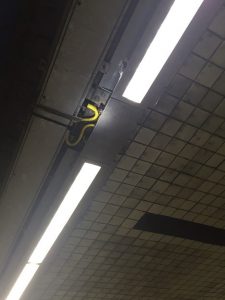 Kenall coordinated with the CBBT to manufacture fixtures that would fit perfectly, both in terms of longitudinal locations of the cord sets on the fixtures, as well as cord set lengths and clearances between the fixtures and the adjacent wire way.

Because the LED replacement luminaires had to physically fit within the existing footprints, Kenall had to design a completely new tunnel luminaire. At the time of design, not only did Kenall not have such a customized footprint tunnel luminaire in its product portfolio, no lighting manufacturer did. We designed a more compact luminaire to fit within the existing fluorescent fixture footprint, while maintaining the accessibility of component parts for servicing. Our engineers were able to implement the same or smaller physical design/footprint for all fixtures in the project’s various tunnel zones, minimizing the types and quantities of replacement fixtures, as well as parts, to be stocked by CBBT maintenance personnel.
To address the challenges of providing the required light output in the threshold zones while maintaining an extremely shallow profile, Kenall designed custom heat sinks for the LED drivers to mitigate the heat. This, combined with the new fixture housing’s 2.5-in. profile and linear design for air flow, allowed the fixture to operate at a relatively low temperature, despite its location on the ceiling deck. Kenall engaged in multiple iterations of driver testing at its own test lab to replicate actual conditions in the tunnels, and performed exhaustive heat testing on the fixtures to verify thermal performance in simulated field conditions – not just in typical ambient lab conditions.

Because the LED replacement luminaires had to be re-fed from the adjacent existing wire way on the ceiling deck, Kenall participated in field surveys with the CBBT to discover type, length, and location of all cord sets, and match them. During those surveys, we discovered that some locations had only minimal clearance between the fixtures and the wire way, necessitating a 90-degree cord connector. Kenall coordinated with the CBBT to manufacture fixtures that would fit perfectly, both in terms of longitudinal locations of the cord sets on the fixtures, as well as cord set lengths and clearances between the fixtures and the adjacent wire way.

Finally, since the LED replacement luminaires had to be mounted onto the existing mounting rail located on one side of the existing wire way, Kenall participated in field surveys with the CBBT to confirm a custom mounting bracket design to fit the existing wire way mounting rail. During that survey, we discovered that the other side of the fixtures required conventional mounting tabs, to be anchored into the ceiling deck. As a result, Kenall coordinated with the CBBT to further customize the luminaires: we needed the mounting tabs to fit perfectly in locations where anchors had not been previously drilled into the ceiling deck, so they would be structurally stable when installed. This modification/addition allowed for a quicker replacement by CBBT personnel, minimizing the need to modify existing mounting design already present. 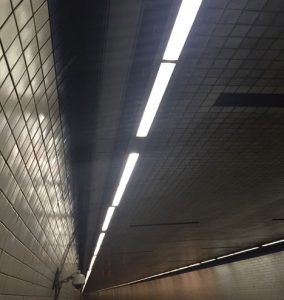 Kenall coordinated with CBBT to further customize the luminaires so they would be structurally stable when installed.

How did the CBBT come to work with Kenall?

Kenall was recommended by Lighting Virginia, after retired CBBT E/M Superintendent Michael “Tee” Wells consulted with them regarding another lighting product installed at the former restaurant Virginia Originals & Chesapeake Grill, located at One Island on the Bay.

The CBBT was aware of the LuxTran brand but wasn’t sure it would meet the project parameters: they only knew Kenall as a company that prioritizes luminaire quality and design over low initial cost. But we proved that we were able to meet all the project requirements, while maintaining our standard of quality and delivering a completely customized product.

As noted previously, these luminaires did not yet exist at the time of design: Michael Crist told us that that industry outreach identified no existing light fixtures that could meet the needs of the CBBT. Consequently, they invited manufacturers to submit a custom design; then prototype designs were tested in the tunnel. After testing, CBBT selected the LuxTran fixture to move to a pilot program, and, ultimately, for the full lighting replacement. The design and acceptance of the LuxTran LTLI-8 fixtures came as the replacement effort evolved, and as a result of a collaborative effort between the CBBT and Kenall.

We worked with the CBBT every step of the way to create lighting solutions for the new Interior, Transition and Threshold Zones, in order of priority. For the initial competitive mockup, the CBBT asked us to provide an LED solution for a small section of the tunnels’ Interior Zones, since these areas would require the largest number of luminaires – 1,608 out of 2,835. Kenall engineers made this their top priority, and, upon completion of testing, submitted the sample fixtures to the CBBT for installation and review. After a successful mockup trial period, and a thorough review of Kenall’s submittal package and certified test reports for the new luminaires, the CBBT approved them for the tunnels’ Interior Zones.

Once the Interior Zone Fixtures’ final design was tweaked and completed, based on the results of the Interior Zone Mockup, Kenall then followed the same painstaking process to complete the more complicated designs for the Transition and Threshold Zones. All lighting tests, the pilot projects, and, ultimately, the full replacement was conducted by CBBT personnel led by E/M Superintendent, Chase Sturgis.

What notable fixture listings and certifications were required for the project?

There many criteria that had to be met, including:

Now that the luminaires are installed and operational, how is the tunnel lighting being received?

Because Kenall supported this project every step of the way, the fixtures are performing as promised. The final installation is nearing completion, meets all project requirements and looks great, so the CBBT is very pleased. The tunnel lighting is more uniform than before, and the 5000K/70 CRI system provides excellent safety and visibility for drivers in the tunnels.

The collaboration between Kenall and the CBBT has been very positive and proactive along the way, and we are extremely grateful. Michael “Tee” Wells put the entire project in motion, and led it with passion, helping to make this a reality. It was Tee who led the charge up through the initial design, competitive mockup and the first round of interior installation: we owe him a debt of gratitude, and we will all reap the benefit from his efforts. Working together, we have enhanced public safety and improved efficiency for the CBBT, which has made the project a great success.

Michael N. Maltezos, MIES, is the Transportation Sales Manager for Kenall and may be reached at 847-507-4531 or michael.maltezos@kenall.com. Kenosha, Wisconsin-based Kenall produces and supports high quality and durable lighting solutions for the most demanding environments. Kenall products are manufactured in the USA and meet the guidelines established under the Buy American Act and the North American Free Trade Agreement. For additional information, visit www.kenall.com.