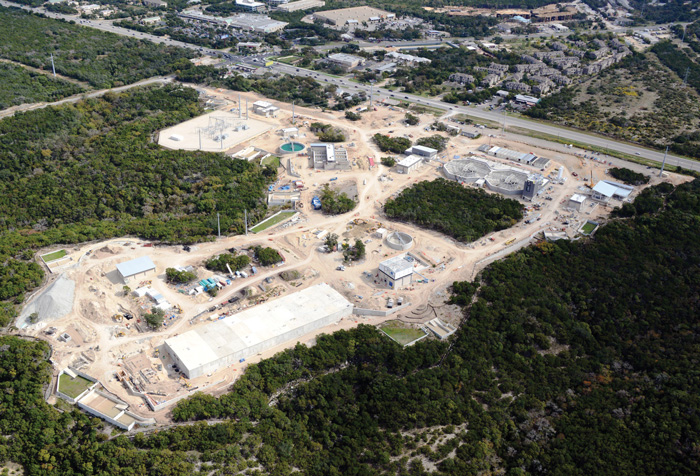 In 2009, the City of Austin, Texas, authorized construction of a new $508 million water treatment plant located in northwest Austin. Water Treatment Plant No. 4 (WTP4) is scheduled to provide clean drinking water to area residents and businesses by summer 2014. Roughly half of the project consisted of tunneling components where project teams had to closely coordinate with the City and local residents to creatively address a host of environmental and community concerns as well as work through a few construction challenges.

Project Development
The Austin metropolitan area has become one of the country’s fastest-growing regions with growth projections that the current population of nearly 850,000 residents will increase by 500,000 people by 2040. What’s more, the area is in the epicenter of Central Texasí third-year drought. With the new WTP4, the City of Austin is addressing these challenges and ensuring safe and reliable drinking water is accessible for future generations. 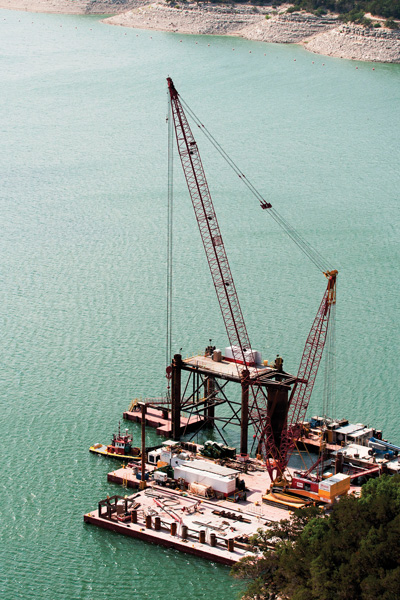 Currently, the Austin area has two water treatment plants, both of which draw from Lake Austin — the Davis Water Treatment Plant, built in 1954, and the Ullrich Water Treatment Plant, built in 1969. The plants are run by Austin Water Utility to serve residences, businesses and industries. WTP4 will take raw water from Lake Travis, a deeper water source at a higher elevation, providing a reliable system and continuous service during shutdowns and repairs for the other treatment plants with far less pumping costs.

The full project scope is broken into separate design and construction contracts that include a marine raw water intake structure, raw water intake tunnel and pump station; new 92-acre water treatment plant, which has an initial capacity of 50 million gallons a day (mgd) of water expandable to 300 mgd; and the Jollyville Transmission Main (JTM) tunnel, which connects the plant to the existing water distribution system at the Jollyville Reservoir. The JTM tunnel was packaged separately to ensure it was completed around the same time as the other WTP4 project components. MWH Constructors, the construction arm of MWH Global, provided overall construction management-at-risk (CMAR) services under contract with the City of Austin to safeguard coordination and timely completion of the work being performed by the numerous sub-contractors. 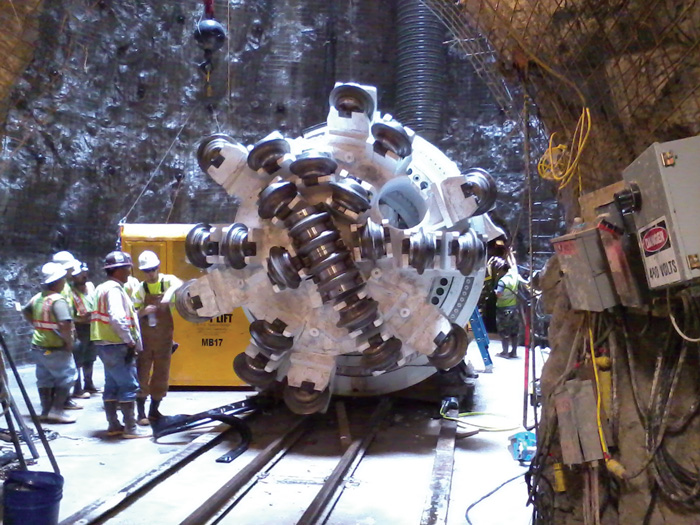 Of note, the 9-ft diameter raw water intake tunnel conveys the water by gravity from Lake Travis to the raw water pump station nearly a mile away. Water is lifted over 450 ft by five vertical turbine pumps, and then sent on to the treatment plant via an 84-in. diameter, steel-lined tunnel. Following conventional water treatment, the finished water will be sent through the 7-ft diameter JTM tunnel to the Jollyville Reservoir nearly seven miles away, where water will be stored and distributed to Austin Water Utility customers.

For the JTM tunnel, a key challenge was passing under the Balcones Canyonlands Preserve, a system of habitat preserves created to protect eight federally listed endangered species — six karst invertebrates and two bird species ó and a threatened salamander known as the Jollyville Plateau Salamander.

Before breaking ground on the project, Austin Water Utility and the City of Austin’s Watershed Protection Department developed an environmental commissioning plan to guide the project in minimizing environmental impact and help protect the nearby environmental resources, sensitive species and their habitat. The plan outlines a process that integrates environmental review and oversight of the project to meet the environmental goals beyond typical federal, state and local regulatory requirements. The process specifically includes an ongoing audit with recurring meetings, reviews, oversight, inspection, permitting and other tasks. The process requires a collaborative effort with the City’s project team, environmental commissioning team and all contractors to work closely together on the design and construction methods.

The environmental commissioning plan and project team collaboration has resulted in a more balanced decision-making process for vetting the project design. For example, through this process, it was decided to shift the JTM tunnel’s access shafts to the perimeter of the Balcones Canyonlands Preserve to avoid disturbing the critical habitat area. The JTM tunnel was also lowered an additional 50 ft to further reduce potential environmental impact in the areaís fragile karst geology. Community input was solicited and incorporated into the design and construction processes to mitigate impacts to residential areas.
Three tunnel boring machines were used to complete the JTM rock tunneling excavation. Pipe installation for Reach No. 1, No. 2 and No. 3 have all reached completion. While under construction, they had daily advance rates of more than 200 ft. Reach No. 1 is more than 4,450 ft long to the first access shaft; Reach No. 2, directly below the Balcones Canyonlands Preserve, is more than 20,400 ft long to the second access shaft; Reach No. 3 is nearly 9,700 ft long to the Jolleyville Reservoir access shaft.

Additionally, the raw water intake tunnel had its own environmental concerns. The tunnel had to go through the Glen Rose Formation, a geological formation consisting mostly of hard limestone, and below the karst formations. To avoid disturbing these features and to minimize any environmental impact from the raw water tunnel to Lake Travis, the tunnel was excavated 450 ft below the karst formations. 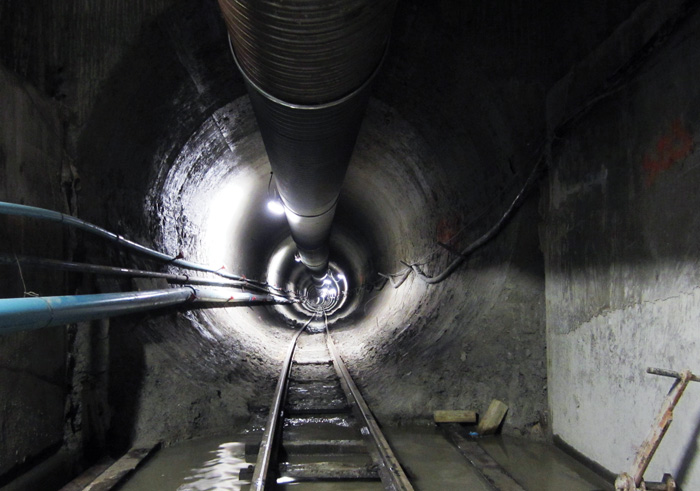 Construction Challenges
A significant construction challenge was creating the foundation to install the raw water intake tunnel. The foundation was built using a temporary trestle on top of the water on the edge of Lake Travis — one of the largest recreational lakes in Texas. The original concept called for a concrete gravity base that required extensive dredging. However, due to the limited amount of dredging allowed by the permit from the U.S. Army Corps of Engineers (USACE) and the water quality restrictions mandated by the Lower Colorado River Authority (LCRA), the project explored an alternative method to the original design.
To find an economical and feasible alternative method, the CMAR and design team collaborated on constructability of the foundation during the design process.  In addition, the CMAR used a unique approach to value engineering: asking contract bidders for additional value engineering ideas. Through this process, the project eliminated all dredging by employing a drilled or driven pile foundation to support the intake in lieu of the original design. 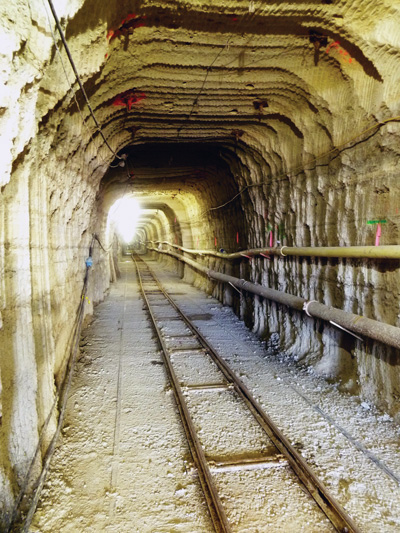 Another benefit of substituting pre-fabricated steel frames used by the driven pile method for the original reinforced concrete frames to support the intake was that it cut down by 90 percent the amount of time divers had to be in 150 ft of water in Lake Travis.

Accessibility to the lake was also difficult given the massive equipment and fact that most accessible lakefront property was being used for residential or commercial purposes. LCRA was instrumental in facilitating access to bring in the larger pieces of the structure. LCRA allowed Manson Construction, the contractor responsible for the marine construction, to stage the largest piece of the intake — the riser — on top of the Mansfield Dam located across a deep canyon at Marshall Ford on the Colorado River. It was then lifted off the dam with the purpose-built, 300-ton derrick barge assembled on-site by Manson Construction.
Another significant construction challenge was making the connection from the raw water tunnel to the intake systems. Any unknown cracks or fissures in the rock in the area of the connection to the intake system could create a risk of tunnel flooding with construction activity. To minimize this issue and in accordance with AECOM’s contract requirements, Obayashi USA performed a prescribed routine of probe drilling and pre-excavation grouting adjacent to the intake structure prior to making the final connection.

Keys for Project Success
With more than 2 million man hours worked on WTP4 to date and completion on track for summer 2014, the project team identified several keys to success, such as the CMAR method and collaborating with the local community and all contractors. 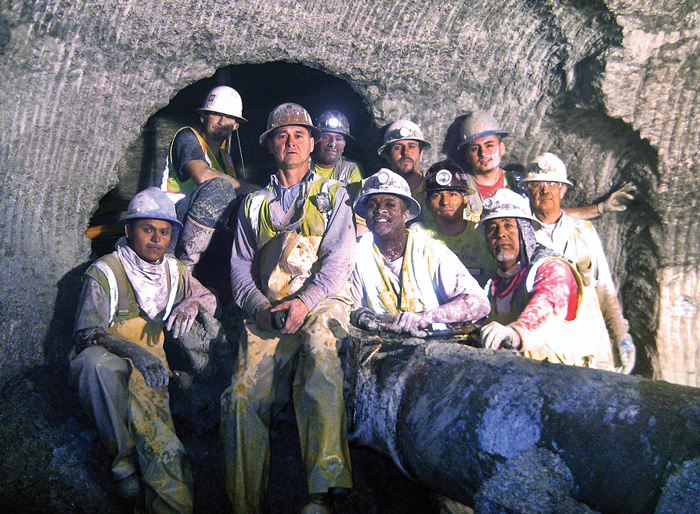 Because the project has multiple components, including the raw water intake system, water treatment plant and the JTM tunnel, the City of Austin chose the CMAR method to keep all components in a single contract, making this the largest CMAR tunneling job in the state of Texas. This approach placed responsibility of the different construction packages under one firm to coordinate all subcontract work, which has allowed the construction manager to be involved during the design process and to assist the design team to deliver the WTP4 project on time and on budget for all phases to date.

The City of Austin is also very in tune with community interests and impact. To ease community concerns over any environmental issues and construction-related disruptions, the project team focused on community outreach and local stakeholder engagement. For example, MWH Constructors continued the public outreach effort initiated during the design phase by conducting various grassroots efforts in neighborhoods surrounding WTP4, such as holding open houses to educate area homeowners and business leaders, developing a letter of commitment to the neighborhood association and folding it into a subcontract, and hosting a tunnel tour for key stakeholders to see the work and progress first-hand. The result is ongoing and open communication, improved understanding of the projectís goals and greater community support during the construction process.

To overcome design and construction challenges and find effective solutions, the project has notably required a team effort on the JTM and raw water intake tunnels. This collaboration with the design team, construction team and the City of Austin — the three legs to the stool — has made the project a success to date.