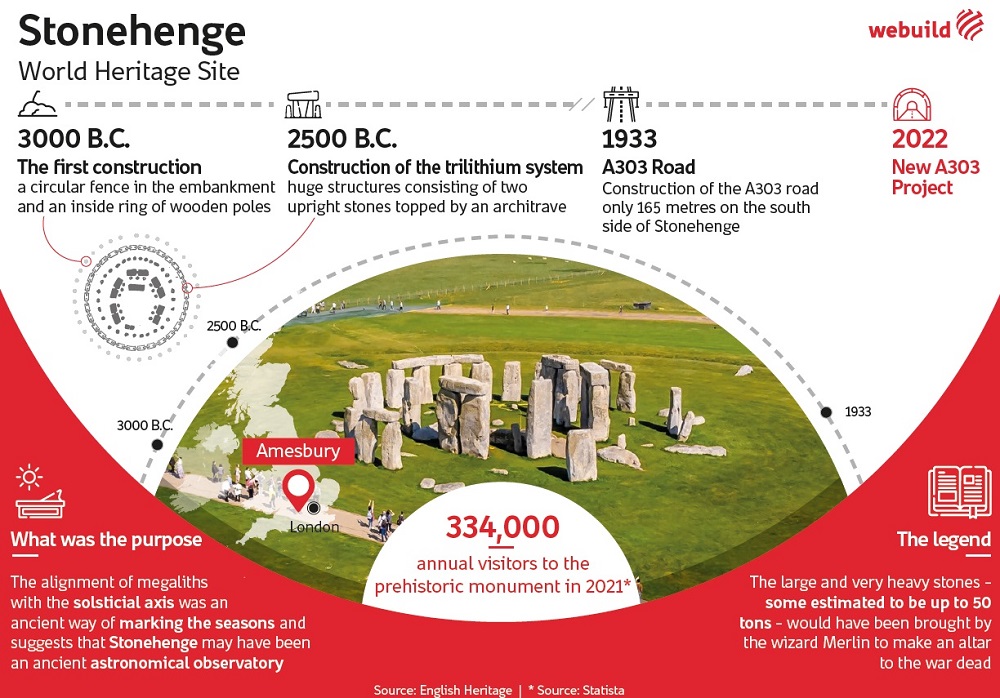 Webuild returns to the United Kingdom after more than a decade with a £1.25-billion contract that it has won with consortium partners to improve the A303 trunk road and excavate a tunnel near Stonehenge between Amesbury and Berwick Down in southern England.

The signing of the definitive contract comes after the Group and its partners were named preferred bidders in May. It entails building a near 13-km dual carriageway with a 3.3-km tunnel that will remove traffic that passes through the UNESCO World Heritage Site and return the landscape to something resembling its original setting. The project is to create more than 1,000 jobs.

Commissioned by National Highways, the contract will be developed by the MORE consortium in which Webuild has a 42.5% stake, FCC Construcción 42.5% and BeMo Tunnelling UK 15%. Known as the A303 Stonehenge – Main Works Contract, it covers the construction of the proposed tunnel’s civil, structural, mechanical, electrical and technology components, including the tunnel-boring machine, along with the approach roadworks and structures and the environmental components. Construction is to last five years.

Webuild brings to this complex project a track record of approximately 2,400 km of tunnel work along with approximately 80,300 km of roads and highways throughout the world. It also has extensive experience in safeguarding historic monuments and archeological sites. One example is the series of construction sites along the planned route of Line C that it is developing with consortium partners for Rome’s metro system. It has studied the possible impact that the line’s construction might have on nearby buildings, monuments and archeological sites in the city centre and identified innovative solutions to protect them.

Webuild’s previous projects in the United Kingdom include the Oxford Cancer and Haematology Centre at the Churchill site of Oxford University Hospitals. In Northern Europe, the Group is present in Sweden and Norway, where it is working on the Sotra Connection PPP Project and the railway between Nykirke and Barkaker at the south of Oslo.