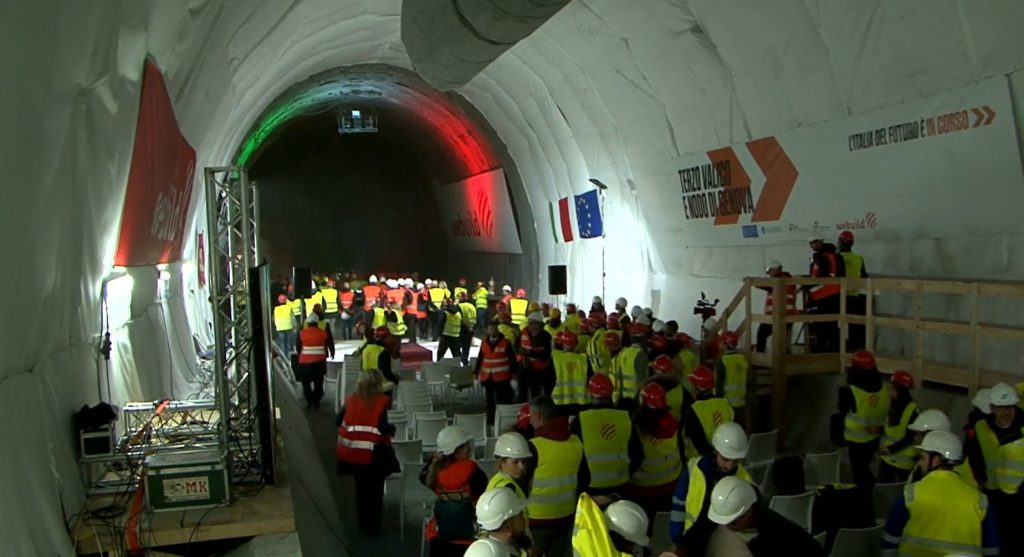 The milestone was celebrated Dec. 4 with the breakthrough of a tunnel wall in one of the tunnels between the work sites of Polcevera and Cravasco along the Valico Tunnel, set to become the longest for trains at 27 km in Italy once completed. The milestone brings to 30 km the total amount of excavation done for the tunnels planned for both directions of the future railway service thanks to a round-the-clock work schedule. The excavation began at the southern end of the planned tunnels in the Liguria region, proceeded underneath the mountain range to then approach the northern end of the project on the side of the Piemonte region.

“It is an honor to be here. This is an event the fills me with joy,” Webuild Chief Executive Pietro Salini said. “We are here to witness the tearing down of another barrier in a project that could be seen as the Bridge over the Strait of Messina of the North – a virtual extraordinary bridge that brings together people and merchandise travelling from the port of Genoa to the rest of Italy and Europe. We began work on the project in 2012 at a very difficult site where the best resources and companies of Italy are involved every day. It is thanks to them that we have had an accident rate that is 40% lower than the national average, but we need to focus on reducing it to zero. The project will boost the capacity of the Port of Genoa to attract more commercial activity, soon be joined by another project that we will start with the same goal: a breakwater dam (Diga Foranea), which along with the (Terzo Valico) Combined Project will improve logistics operations in Liguria and increase the competitiveness of the entire country.”

The breakthrough is the latest milestone in two years of work resulting in the completion of the excavation of the Nodo di Genova (Genoa Junction). Webuild is building the largest sustainable mobility project in Italy, working on 22 sites between Liguria and Piemonte at the same time with more than 5,000 workers and more than 2,500 small- and medium-sized businesses – directly and indirectly – 900 of which based in either region, on assigned contracts worth a combined €3.8 billion.

The new high-speed/high-capacity railway will have a combined length of 53 km, 70% of which will be underground. It will cross 14 municipalities in the provinces of Genoa and Alessandria. The railway will have three tunnels, the longest being the Valico. The work that is being done on various fronts is deploying two tunneling methods: the traditional drill and blast, and the mechanised method with the use of tunnel-boring machines (TBMs). The railway will become an important part of the Rhine-Alpine Corridor of the Trans-European Transport Network (TEN-T). Travel times by train between Genoa and Milan will be reduced by 33% and is expected to contribute to the reduction of CO2 emissions by 55%.

RELATED: Excavation Works Begin on New Lot of Brenner Base Tunnel in Austria