You are at:Home»News»International News»Webuild, NGE Celebrate Breakthrough on Line 16 of Grand Paris Express 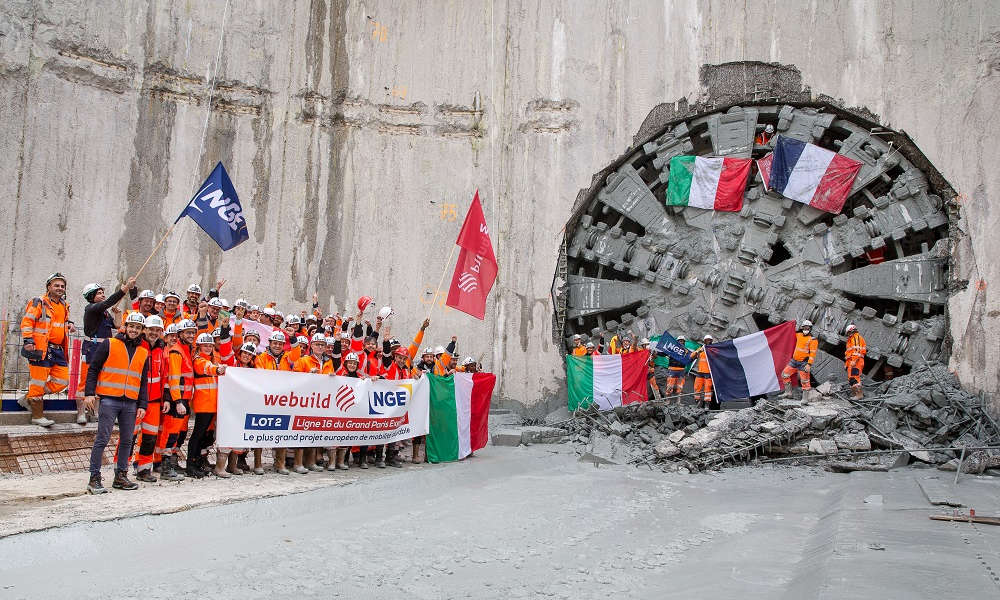 Italy’s Webuild and French partner NGE celebrated the first breakthrough of tunnel-boring machine (TBM) “Mireille” at the future Clichy-Montfermeil station of Metro Line 16 under construction in northern Paris as part of the Grand Paris Express, the most ambitious sustainable mobility project in Europe.

After boring 2.2 km from the Bel-Air site in Chelles at the southern end of Lot 2 – the section of the line under development by Webuild and NGE – Mireille arrived at the station to the applause of the mayors of Clichy-sous-Bois and Montfermeil, representatives of the client, Société du Grand Paris.

It marked an important milestone for the project, which Webuild and NGE shared with the residents of Clichy-sous-Bois via a giant TV screen near the site. Construction Manager Guglielmina Fontana followed the breakthrough in the company of 50 women who work at the site.

Mireille will soon renew its journey for another 3.1 km, crossing the municipalities of Livry-Gargan and Sevran to reach the Mare au Chanvre site at Sevran where it will meet “Houda,” the TBM that is excavating from the northern end of Lot 2.

As part of the Grand Paris Express, Webuild and NGE are developing 11 km of tunnels for Line 16 along with four stations between Aulnay-sous-Bois and Chelles. They have already completed another project together: Lot 4 of Line 14 South that stretches 4.1 km to Orly Airport in the south of Paris. Together, Lot 2 of Line 16 and Lot 4 of Line 14 South will contribute to reducing up to 385,000 cars a day from the streets of Paris, thereby avoiding up to 81,000 tonnes of CO2 emissions every year. Paris aims to become carbon neutral by 2050.

Line 16 will serve the Paris department of Seine-Saint-Denis, transporting an estimated 200,000 passengers every day. The other three stations to dot the line include Aulnay, Sevran-Beaudottes and Sevran-Livry.

The Grand Paris Express will extend the French capital’s metro and light rail network by 200 km with 68 stations to improve connections between the center and the periphery. It is set to improve the local economy, create jobs, promote sustainable mobility and reduce vehicle traffic and air pollution.

With a combined track record of more than 13,600 km of rail and metro lines over the span of more than a century, Webuild is a major contributor to the development of urban and extra-urban mobility, supporting efforts to reduce traffic and pollution by offering safe, efficient and environmentally friendly public transport services.

With a portfolio of more than 20 references on the Paris transport network, including three major underground projects on lines 11, 14 and 15, NGE, via its railway subsidiary TSO, will lead the construction of railway equipment on line 16 thus confirming its multi-disciplinary expertise in delivering sustainable mobility projects.