You are at:Home»Featured Stories»Working for the MTO: CRS Tunnelling Completes Twin Culvert Install Under Highway 11 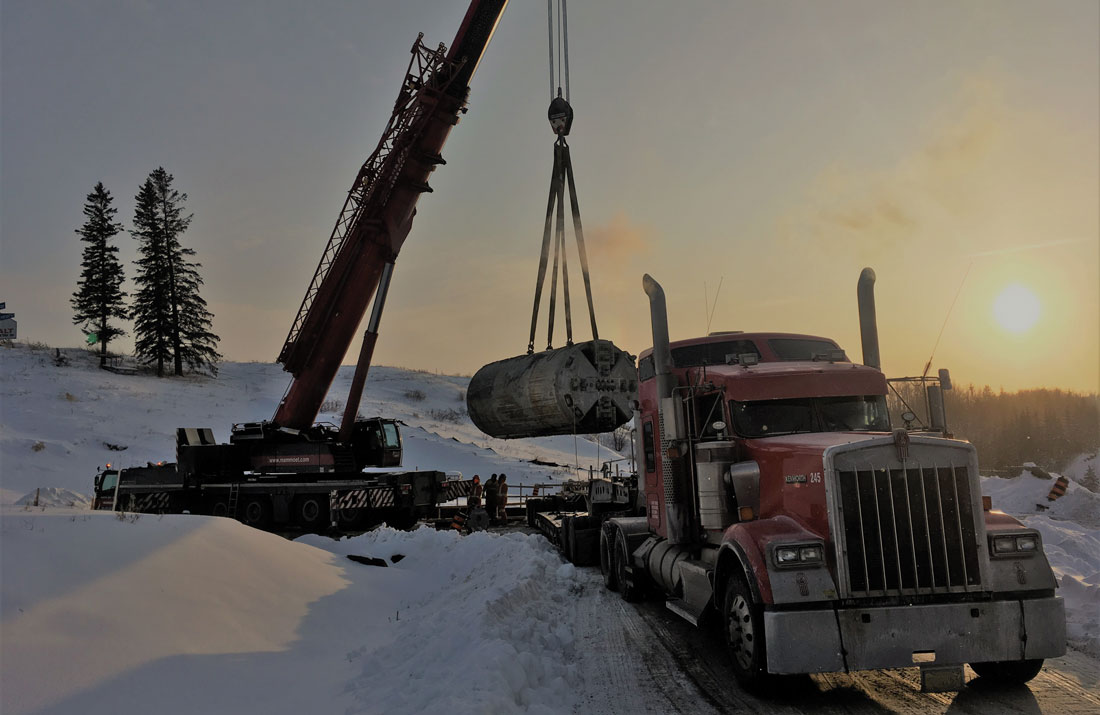 When the Ontario Ministry of Transportation’s Northern Region was faced with a deteriorating box culvert under Highway 11, it was evident that a trenchless solution was needed to address the issue.

Highway 11, also known as the northern branch of Trans-Canada Highway in Ontario, is the major north-south highway serving Temiskaming Shores region and all Northern Ontario. A road closure and detour were not an option given the importance of this throughfare. Due to severe deterioration of the concrete box culvert, rehabilitation of the existing structure was also ruled out.

The project involved the installation of two 150-m long, 2.1-m internal diameter reinforced concrete pipe culverts under Highway 11. Both tunnel drives were to be parallel runs spaced 1.5 tunnel diameters apart. The project took place in the Town of Dymond, 2.6 km north of the Highway 11 and Highway 65 junction in New Liskeard in an area known as Calamity Gulch.

It was determined that installation of the new reinforced concrete pipes using pressurized tunnelling would be the best installation methodology to help mitigate any potential settlement from tunnelling under the highway. CRS Tunnelling opted to use an earth pressure balance (EPB) tunneling machine for the microtunnel project. The crews installed CSA – 140D microtunnel pipe manufactured by Forterra.

According to Walter Trisi, vice president and general manager at CRS Tunnelling, this decision to use an EPB machine was made for several reasons.

The company had the appropriately sized Lovat RME101PJ Series 19200 EPB TBM with all necessary equipment to maintain line and grade and ensure minimal ground settlement in its equipment roster. It had face control doors and chamber access in case the crew needed to go into the cutting head chamber for maintenance or inspections. The latter would prove important as the crews hit a major underground obstacle during the first drive.

“We had this particular machine refurbished for this project because we thought it was the best-suited to handle the geology, reduce risk by allowing us to have face access and still allow us to maintain pressurized mining operation just like slurry,” Trisi says. “We’ve used this machine on a similar-sized highway crossing under a 400-series highway. This machine has a lot of horsepower, and it was well-suited for this job. Our slurry machine would have had to be skinned up.

“On the back end nothing changed [because]it was a pipe jacking operation. For spoils removal we used muck skips vs. slurry pipes and a separation plant because of the possibility of mining in cold weather.”

Prior to work beginning, the team had to plan for the launch. Trisi notes that this was an endeavor because at the launch site – 12 m below the highway elevation – there were no reactive forces behind the main jacking station. This required the design of a site-specific thrust block anchored with rock anchors deep into the earth to take the jacking forces. 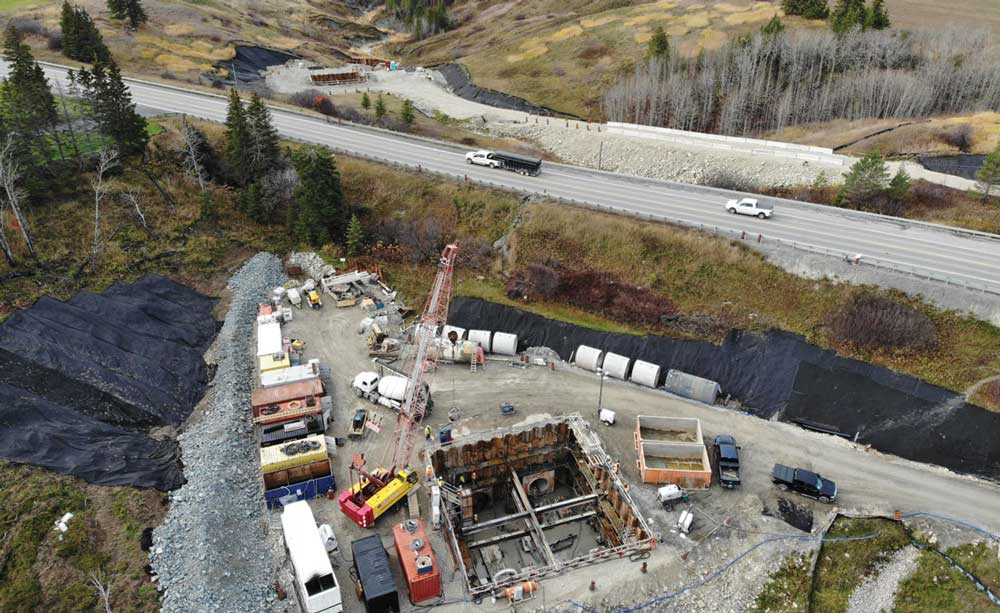 Knowing there would be some work in the colder winter months, the mining operation for the first drive began in 2019. Initial mining was three sections of pipe per day and the crews stopped just shy of the highway. The next shift was planned to be longer because the crew wanted to mine the width of the highway in one day to avoid potential settlement issues. No sooner did the machine clear the highway that the crews hit a major obstruction.

“Just on the other side of the highway is when the machine started to encounter wood debris,” Trisi recalls. “First the creosote smell came and then the wood fragments started appearing in the spoils. I would say it was approximately at the half-way mark just after the machine cleared the highway.”

The large wood fragments, believed to be the remnants of an old bridge foundation, were large enough that it caused the machine to come to a halt. Because of the proximity to the highway embankment, the MTO preferred to not construct a recovery shaft. Instead, the decision was made to give the machine all it had and attempt to power through the obstruction. Because of the creosote odor, Ontario’s Ministry of Labour was consulted. The recommendation was to increase ventilation and wear masks in that section of the works.

“We backed the machine slightly and gave her [everything it had]we rotated the cutter head in both directions and made an aggressive maneuver to break through the obstruction and it worked,” Trisi says. “We believe it did cause us to go slightly off alignment but at the end of the day, we were able to correct and we hit the exist shaft on target.”

Trisi notes that opting to use the EPB machine vs. a slurry setup proved to be the right decision especially after hitting these wood debris.

“The wood fibers could have entangled in the cutting chamber around the cone crusher, the wood could have clogged up the apertures and suction lines of the slurry system. The slurry pumps and separation system would not have liked the wood fibers and debris either,” he says. “This would have caused us a lot of downtime trying to clean the system or even possibly could have cause the machine to stop and we would have had to dig a rescue pit to remove it.”

Because of the approximately one-month delay caused by the obstruction and contaminated ground, the machine broke through Oct. 19, 2019. The Lovat machine was removed, cleaned, retested and back to work in less than two weeks.

The delay caused by the obstruction prompted a change in the work schedule and more cold-weather work. The first tunnel was mined using day shift only. Averaging three pipes a day. The second tunnel was a 24-hour operation to help return to the set project schedule and to avoid freezing of the lines. 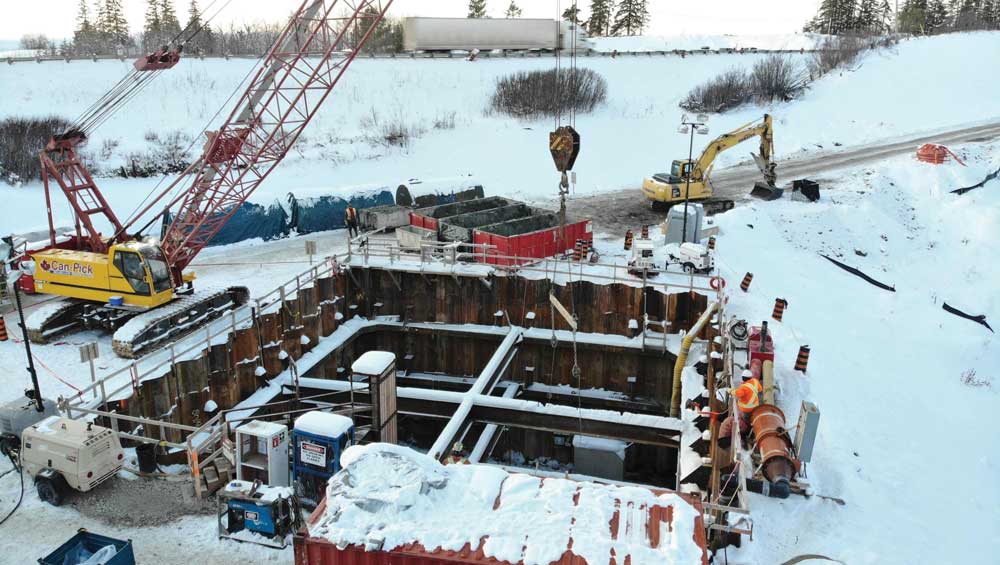 The work took place in Northern Ontario near the Quebec border. When the cold weather rolled in the crews were faced with -40 C temperatures.

“Toronto [where CRS Tunnelling does much of its work]is similar in winter temperature to Buffalo or Wisconsin,” Trisi says. “New Liskeard is close to the border of Quebec, so the temperature when we woke up would be close to -40 C. It’s tough to keep morale up knowing you are going out into the freezing cold.”

Trisi notes that the crew began hitting the colder weather while still working on the first tunnel, but once that was completed, he noticed that the crew’s morale – despite decreasing temperatures – picked up when work began on the second tunnel. Though the crew did hit some wood debris on the second tunnel, it was not enough to stop the machine and the tunnel was installed on-line and on-grade with the TBM breaking through on Dec. 12, 2019.

“All in all, the participants – MTO, CDB, Harbourside Engineering, Lea Consulting, SOS Surveyors and CRS – all worked together to ensure the success of the project,” Trisi says. “Everyone, even in trying times, came together and found solutions to the issues at hand and through perseverance, hard work and ingenuity, we as a team got the job done.” 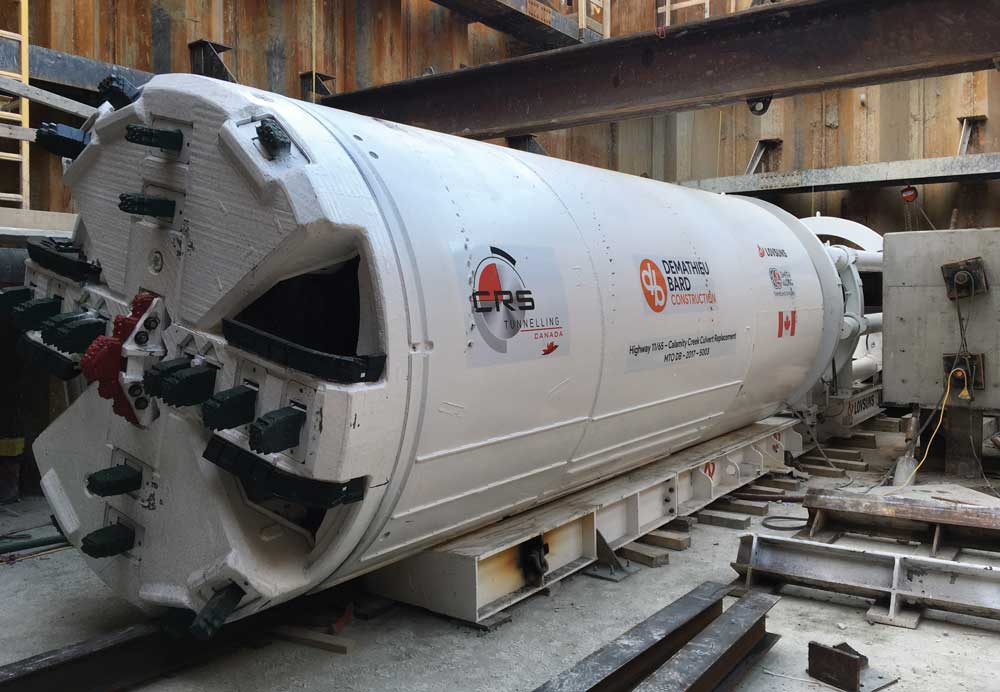