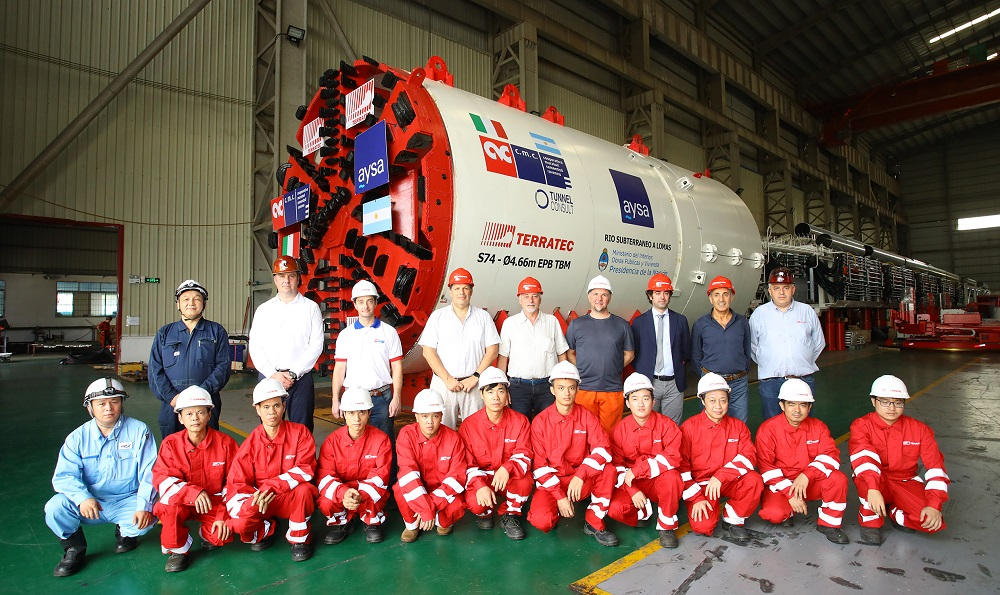 At the end of July, TERRATEC celebrated the successful factory acceptance testing of the second of two new Tunnel Boring Machines (TBMs) that will be used to excavate the Río Subterráneo a Lomas tunnel, in Buenos Aires, Argentina.

Along with its sister machine, the 4.66-m diameter S74 TERRATEC Earth Pressure Balance Machine (EPBM) will be deployed by Italian contractor CMC di Ravenna on a 13.5-km long tunnel that will carry drinking water from the newly expanded General Belgrano Water Treatment Plant, in the city of Bernal (Quilmes district), to the city of Lomas de Zamora.

The tunnel is a key component of the multi-billion-dollar Agua Sur system that is currently being built by Argentina’s national water and sanitation company AySA. Financed by the Government and the Development Bank of Latin America (CAF), it is the country’s largest water infrastructure project in 40 years and will provide access to fresh water for 2.5 million inhabitants in the southern metropolitan area of Buenos Aires.

“AySA is confident that it has chosen the right contractor in CMC for this important project and we have witnessed the close relationship between CMC and its equipment supplier TERRATEC during this week of testing,” said AYSA Argentina Project Manager, Pablo Estigarrivia. “It fills us with confidence that this strong team will work together with the single goal of completing this project as rapidly as possible.”

The 4.66-m diameter TERRATEC EPBMs have been designed to tackle the variable soft ground geology along the project alignment, which ranges from silts to sandy silts with some cobbles expected. The TBMs’ high-torque soft ground cutterheads feature a spoke style design with a 49% opening ratio and cutting tools consisting of fixed and back-loading knife bits to ensure rapid advancement and minimum interventions.

The tunnel will be excavated at an average depth of 25 m, beginning with an approximately 400-m radius curve and continuing along an essentially straight alignment, reaching a maximum slope of +/- 2.0%. As the machines progress, they will install a precast concrete segmental lining ring consisting of six (four parallelograms and two keys) 250-mm thick, 1400-mm wide, segments.

“From the initial concept to this point in the process it has been refreshing working with TERRATEC. We are pleased that TERRATEC has delivered both of these machines on time and to specification and we look forward to getting to work on the project with them,” says CMC di Ravenna Argentina’s Project Manager, Pablo Guevara.

In recent years, TERRATEC’s order book has demonstrated significant growth around the world. Machine performance and client satisfaction have provided the foundations of a loyal customer base making TERRATEC the first choice for more and more contractors.

TERRATEC’s large-diameter TBM facility has produced more than 20 new machines for international projects in the past 28 months.