You are at:Home»News»International News»TERRATEC TBM Breaks Through on Bangkok Tight Radius Curve 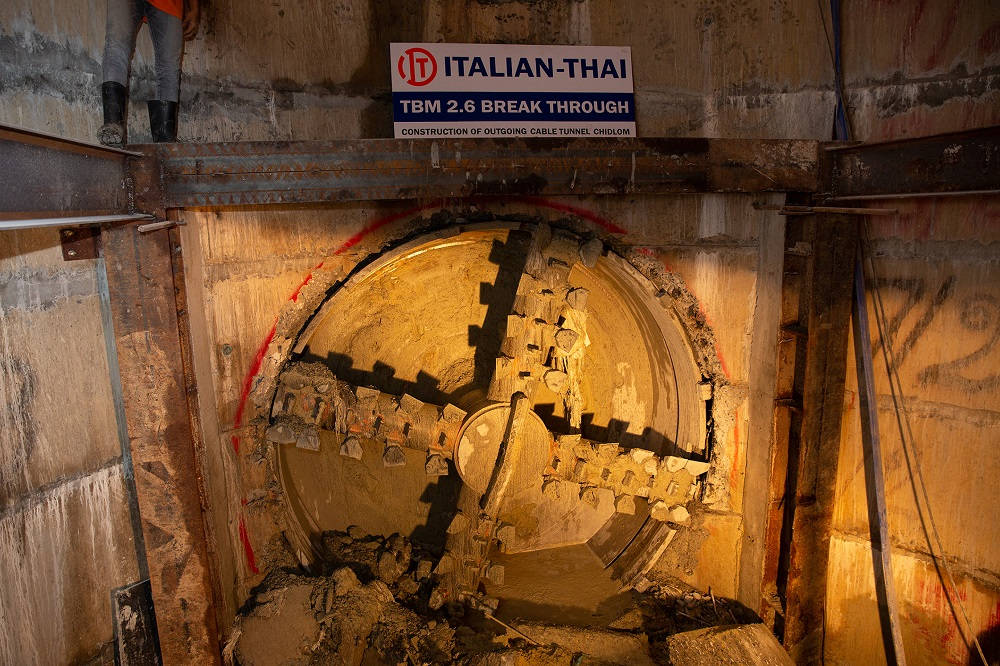 Running from the Central Embassy luxury mega mall, located on Phloen Chit Road within the former gardens of the British Embassy site, and MEA’s Chidlom Terminal Electrical Station, southward to Lumphini Park, the project is located in one of the most exclusive and built up areas of downtown Bangkok.

In order to remain within public road easements, as well as negotiate building foundations and the deep piles of the BTS Sukhumvit Skytrain that run along Phloen Chit Road, the tunnel alignments are subject to strict constraints that require several tight radius curves to bring them into MEA’s Chidlom Terminal station. To achieve this, the TERRATEC EPB machines have been designed with a unique extreme X-type articulation system, which can accommodate very tight curves.

“We have worked closely with TERRATEC on several projects in the past and were keen to work with them again,” explains ITD’s Project Manager, Supak Khunviriya. “They have experience from similar projects in Bangkok, so there was a close collaboration from the tender stage. The TBMs are designed to achieve a high level of performance in difficult circumstances and we have trust in TERRATEC’s team, who have assisted us throughout the tunneling operations.”

The TBMs’ soft ground cutterheads feature an open spoke design with the addition of knife bits to assist break-in and break-out of the concrete shaft eyes. Universal tapered precast concrete segments are typically installed as the machines progress, with shorter steel segment sets utilized during the course of the sharp radius curves. The geology along the project is typical for Bangkok, generally comprising stiff to very stiff clay, with lenses of sand and a groundwater head of about 2 bars.

Tunneling on the project commenced last September: “We started out straight into the 35-m radius curve with the S48B machine, going under a busy five-lane road and around the corner of an exclusive department store at the intersection with Phloen Chit Road,” explains Khunviriya. “This is an old building, so the foundation piles extend down about 20 m. The tunnel is at exactly the same level, so we had to be very careful not to cause any settlement. We also had to negotiate the BTS Skytrain foundations on the other side, giving us a window with about 1 m either side of the machine through the intersection.”

ITD had an array of monitoring equipment in place to check for any tunneling-induced settlement during the curved drive, but zero movement was recorded. ITD credits much of this to the skill of TERRATEC’s field service team, whose experienced TBM operators steered the TBM throughout the curve and are assisting TBM operations and maintenance throughout the project.

Focus on the project has now switched to the other TERRATEC machine, the 4.27-m diameter S69 TBM, which was launched in January and is currently excavating a 1,349-m long tunnel from Lumphini Park to the MEA’s Chidlom Terminal Station. It is due to complete this drive in September. Each machine will then execute a further short curved drive to complete tunneling on the project.

Designed to accommodate a new high-voltage cable system, the Chidlom Cable Tunnel Project is one of a series of tunneling projects being undertaken by the MEA, which are being built to answer increased power demands in the Thai capital. The projects will also improve the reliability of the power transmission system and reduce the risk of physical damage to conventional above-ground power lines as a result of accidents and storms.

TERRATEC has a well-established regional base in Thailand, having sold its first machine in the country eight years ago for the Metropolitan Rapid Transit (MRT) Blue Line Extension Project. Since then, TERRATEC has become the country’s leading TBM supplier, with nine machines supplied to Thai projects in recent years.