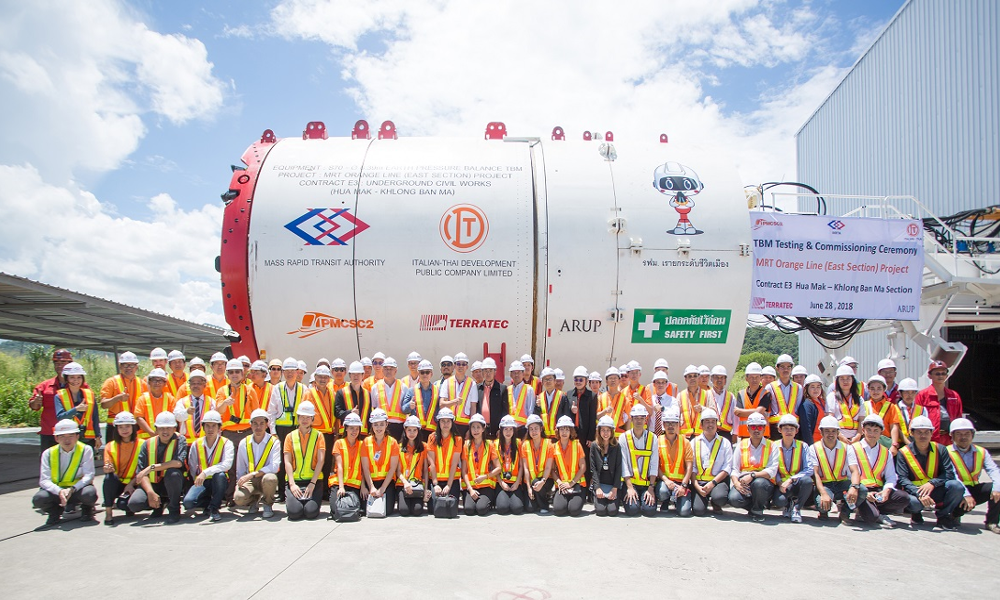 The robust 6.39-m diameter TERRATEC Earth Pressure Balance Machine (EPBM) will be deployed by contractor Italian-Thai Development PCL (ITD) on one of three underground civil works contracts for the first 23-km long (East) phase of the project, which comprises 11.38 km of twin single-track tunnel alignment and 9 km of elevated track running from the central Thailand Cultural Centre station to Suwinthawong station in the east.

Contract E3, which was awarded to ITD in May 2017, totals over 6km of TBM driven tunnel and three underground stations, extending from Hua Mak to Khlong Ban Ma.

The TERRATEC TBM has been designed to tackle the complex and variable soft ground geology of the city, which ranges from soft and medium to stiff and very stiff clays, with lenses of dense sand and the potential for high pressure groundwater inflows.

In order to handle these challenging conditions, the TBM’s soft ground cutterhead features a spoke style design with a 43% opening ratio and the addition of back-loading knife bits to assist break-in and break-out of the concrete station shaft eyes. In addition, the machine is fitted with an active bentonite face support injection system and double gated screw, to ensure face stability and mitigate ground settlement during excavation within areas of flowing sands and high groundwater pressure.

“We would like to thank our long-time business partner, TERRATEC, for being a great supporter of our tunnelling projects through many challenges encountered. Despite the complex works that lie ahead of us on this project, we are very confident in the design of the machine and that it will perform well in the expected conditions,” says ITD Project Manager, Sanya Thirakajornwong. “The TBM will arrive on site at the end of July, with tunnel excavation due to begin in December, proving that TBM production has been on schedule and that the delivery was well-prepared. It will also be a great pleasure to work with TERRATEC’s field service support team once again, allowing us to meet project completion effectively and efficiently.”

As the machine progresses along the alignment, it will install a precast concrete segmental lining consisting of five x 1200mm wide Universal style segments plus key, with an internal diameter of 5.7m. These are being produced by ITD at the same factory used for segment manufacture during its MRT Blue Line underground works contract five years ago, which also employed a TERRATEC TBM.

Bangkok’s new Orange Line will eventually total about 35.4km with 26.2km aligned underground with 23 underground stations and another 9km and seven stations on elevated structures. The route starts underground at Taling Chan railway station, west of the city, passes under the Chao Phraya River near Somdet Phra Pin Klao Bridge, and connects to the depot of the Mass Rapid Transit Authority of Thailand (MRTA), which is located at the current MRTA Office Building. It then continues along the Rama IX road, turns left into Ram Khamhaeng Road, passes beneath the Lam Sari intersection and transitions to the elevated section from the Khlong Ban Ma Station, terminating at Suwinthawong Station near the Ram Khamhaeng-Suwinthawong junction.

TBM operation will be assisted at all times by TERRATEC’s highly-experienced Field Service staff, providing quality after sales support to ensure optimum performance and successful project completion.
When complete, in 2023, the Orange Line will provide a vital transportation link from Bangkok’s city centre to districts in the east, reducing traffic congestion and paving the way for improved accessibility, economic growth and new residential and commercial opportunities along the alignment.