You are at:Home»News»International News»Acciona JV Begins Work on Highway Project in Canary Islands 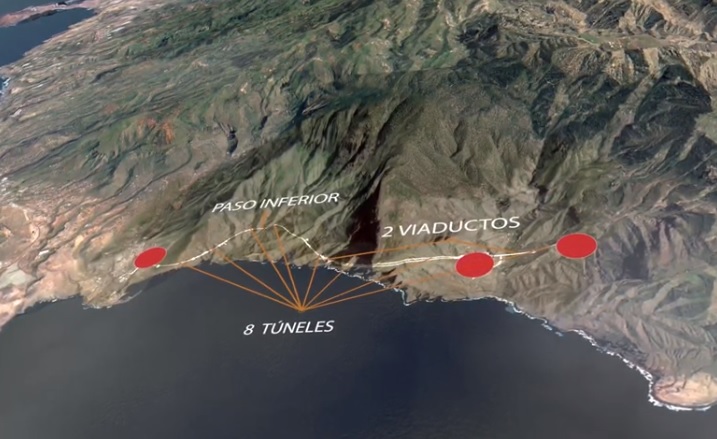 ACCIONA is part of the joint-venture chosen by the Regional Ministry of Public Works, Transport and Housing of the Canary Islands’ government to construct the El Risco-Agaete highway section in the municipality of La Aldea de San Nicolás (Gran Canaria).The mountainous terrain that the new route must overcome means that the project includes construction of various special structures over a section of just 8.5 km, including eight tunnels, two viaducts, one underpass and three intersections.

The joint-venture’s first task is to excavate nearly 5.5 km of tunnels, three quarters of the total length of the project.The aim is to construct and open the first tunnels (El Risco) within 24 months from the start of the works.Controlled blasting and mechanical plant will be used for the underground excavation of this infrastructure.Two parallel tunnels just over 2 km long each, with a 6 m radius and a 5 m clearance will be constructed in this first phase.

The viaducts will be located in El Risco and the La Palma ravine.The first will be 522 m long and 15 m wide over a 70 m deep ravine, while the La Palma viaduct will be 127 m long, with a variable width between 16 and 12 m.

The El Risco-Agaete section will complete the route of the GC-2 to La Aldea, replacing the old GC-200, a hazardous road due to constant landslides that forced its closure on repeated occasions and used to leave the inhabitants of La Aldea virtually cut off from the rest of the island.The commissioning of this new section will also prevent the emission of large quantities of CO2 and allow the land that the GC-200 crosses to regenerate.

The project is included in the National Highways Agreement. It requires an investment of €152 million and will take 65 months to complete.