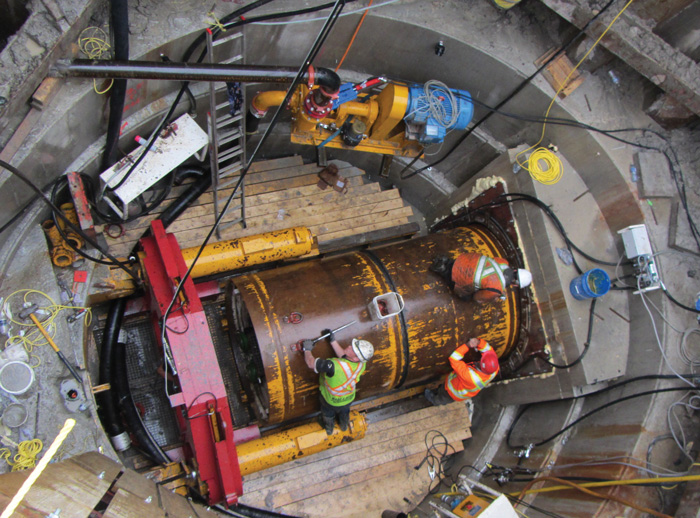 Ward and Burke Helps Advance the Market in Canada

As the largest city in Canada (and fourth largest in North America), the City of Toronto is a vibrant metropolis that is constantly rebuilding itself to meet the needs of its citizens. But the city’s modern buildings, transportation system and communications infrastructure make it hard to envision that it was still relying on old technology for the construction of its subsurface infrastructure.

For many water and sewer lines, open-cut or rib-and-lag tunneling in conjunction with dewatering were common. Despite advances in microtunneling and its use in other parts of the world, many agencies stuck to tried-and-true methods. Until recently, that is.

In 2011, Ward and Burke Construction, a heavy civil contracting company based in Ireland, re-introduced microtunneling to Toronto with the completion of the Gore Rd. project. That project involved the construction of a new 1,200-mm ID sanitary sewer pipe running directly under an existing 1,800-mm concrete pressure pipe water transmission line and an existing creek at Gore Road, in Brampton, Ont. Because of the presence of groundwater, cohesionless ground and the 1.5-m clearance between the two lines, settlement to the transmission line was a significant threat and traditional open-face tunneling methods were not suitable.

“Some clients and consultants were familiar with the technology, but until somebody actually completed a project, no one was willing to specify it as microtunneling,” said John Grennan, a founding member of Ward and Burke’s Canadian operations with Robert Ward. “We started with some small, 10-m long tunnels, then 20 m, then up to 100 m and more. So the more tunnels that we did and the longer they got, everyone built up confidence, but it took a lot of jobs to build up that confidence. ”

From those initial steps, the company has undertaken increasingly complex projects, including the Keswick WPCP Effluent Outfall Project, which was selected as 2013 Runner-Up in the Trenchless Technology Projects of the Year awards for New Installation. The company has just finished the Elgin Mills Watermain Project and is currently involved on the North Don Project, which are among the most technically challenging in North American – and the world. 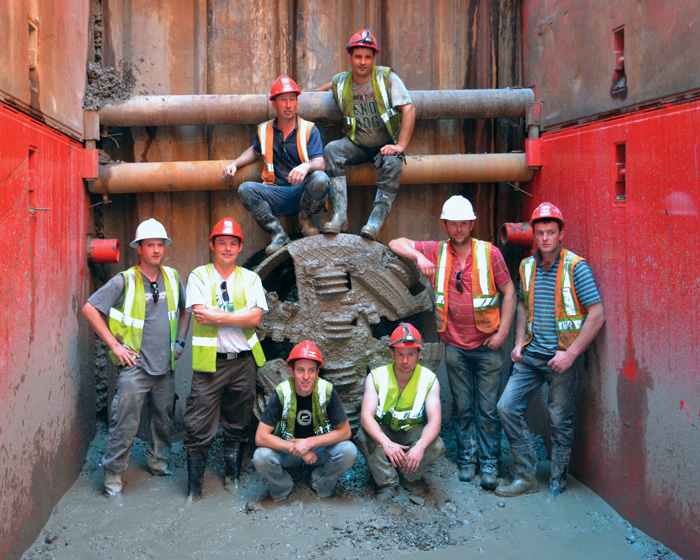 Crew members pause for a photo after the completion of Ward and Burke’s first microtunnel in Canada.

Coming to North America
Ward and Burke was founded in Ireland in 2001 by Padraig Burke, Robert Ward and Michael Ward as a construction company engaged in heavy civil construction, including tunnels, pipelines, road and bridges. Ward and Burke expanded to the U.K. market in 2008 before entering the Canadian market in 2011. The reasons for entering the Canadian market were twofold: the markets in the U.K. and Ireland were stagnant at the time, and the company saw potential in Canada. The only thing missing was an opportunity.

“North America was a place where we would have liked to see ourselves doing some work, but the opportunity never came,” Grennan said. “But then through our microtunneling success in the United Kingdom and our reputation for doing good work, we ended up being contacted by McNally Construction Inc. in Canada, which was preparing to undertake two trenchless bores for Aecon. We ended up coming to an agreement with McNally to do that job (the Gore Rd. project) for them as a microtunneling project.”

That first project totaled just 340 m of microtunneling, and without other work lined up, it left the company with a decision about its future. “We had to make a decision as to whether we would pack up the equipment and go back to the U.K., or if we would make an effort to try to find work for the equipment around Ontario. And, fortunately enough, there was another project on Avenue Rd. for the City of Toronto that lent itself to microtunneling, and we were able to have our proposal accepted.”

Without microtunneling jobs to bid, Ward and Burke continued to bid on trenchless projects with a microtunneling alternative and was able to sustain itself. One of the keys to the company’s success through that period was its approach to re-educating owners and engineers about the process and benefits of microtunneling. In fact, some 80 visitors stopped by the project to get a firsthand look.

“Up to the Gore Rd. job, microtunneling had effectively vanished out of Ontario for 12 years,” Grennan said. “Being able to complete the Gore Rd. project and then a number of subsequent projects  following that helped re-educate the local municipalities and consultants on the advantages of the equipment.”

As time went on and owners and engineers began to become more familiar with the process, more opportunities began to emerge. Amazingly, these projects included world-class projects in an area that practically devoid of microtunneling a few short years ago.

Expanding Boundaries
After breaking into the Canadian market with a series of short bores and specialty projects, Ward and Burke got its first major project as part of the Toronto Pearson Airport Jet Fuel Lines project, which consisted of twin 320-m tunnel with 1,200 mm ID pipelines built just 0.5 m apart. Most importantly, the project caused zero disruption to airport operations or local traffic and commerce.

This set the stage for some of the more recent projects that are leading examples, not just in Canada, but throughout North America and the world.
Keswick WPCP Effluent Outfall Expansion: This project is situated in Keswick which is situated on the Southeast corner of Lake Simcoe, adjacent to the well-known recreational area called Cooks Bay. The project scope involves the on-shore construction of approximately 1 km of gravity sewer using open trench excavation and microtunneling techniques along with 800 m of off-shore dredging in order to install a 300- to 1,200-mm ID HDPE outfall diffuser system. The soil conditions within the southern limits of Lake Simcoe are extremely challenging and are characterized as very weak sands and silts, with typical “N” values of 0-3. As a result the project contract documents specified both microtunneling and sealed shaft construction.

Ward and Burke presented the general contractor (McNally Construction) and the client with a technical value engineered proposal of eliminating two intermediate manhole structures while ensuring that the difficult ground conditions could be dealt with successfully. The proposal also included sealed caisson shaft construction, and long distance microtunneling, which incorporated combined curves. The final unique element of the Ward and Burke subcontract involved the construction of an off-shore microtunnel and subsequent lake bed “wet retrieval” of the tunnel boring machine, a first for Canada. The tunnels traverse beneath several sub-surface utilities including an existing pre-jet grouted 750 mm ID sanitary sewer, with approximately 500 mm of clearance. An extensive settlement monitoring program has been in place since the beginning of the project with no observed settlements have been noted or recorded during any of the shaft sinking or tunnelling operations.

The designed tunnel alignment for the Keswick Effluent Outall resulted in the first ever combined vertical and horizontal curve microtunnel ever constructed in North America, as well as the first curved drive in Canada. The contractor proposed the curved drives as a means of eliminating two shafts, which resulted in over $800,000 cost savings for the York Region. The Keswick Outfall was also the first time that a microtunnel boring machine was ever used to construct a sewer outfall. It was also the first time that a MTBM was successfully removed using the “wet reception” in Canada.  The project was completed in June 2013.

Elgin Mills Road Waterman: This project was part of York Region’s long-term Water Supply Master Plan. The 600-mm ID CPP Watermain was constructed along Elgin Mills Rd., from Enford Rd. East to Bayview Avenue in the Town of Richmond Hill. The prime objective was to reinforce the current watermain systems serving the Towns of Richmond Hill and Markham. The contract specified that the watermain be constructed utilizing trenchless methods. The Region of York awarded the contract to Drainstar Contracting Ltd who subsequently awarded a sub-contract to Ward and Burke Microtunnelling for the construction of microtunnel and associated shafts. Ward and Burke proposed to construct the 740-m long, 1,500-mm ID microtunnel using a Herrenknecht AVN1500 MTBM, from one specifically designed microtunnel drive shaft. The resulting designed alignment consisted of three engineered horizontal curves with straight tangents in between each curves. The curve details were as follows: 1) 400-m radius curve, 180 m long; 2) 3,000-m radius curve, 83 m long; and 3) 400-m radius curve, 80 m long.

The sub-surface geology along the tunnel alignment predominately clayey silt and till, along with sandy silt, and a high watertable. The surface streetscape is characterized by residential and commercial buildings, with significant traffic along Elgin Mills Rd. The designed tunnel alignment for the Elgin Mills PD7 watermain has resulted in the longest, curved microtunnel ever constructed in North America. The project was completed in October 2013.

North Don Sanitary Sewer Project: This project involves the construction of more than 1.8 km of 1,200-mm ID Sanitary Sewer by microtunneling. Pachino Construction Ltd is the general contractor for the project with Ward and Burke as the subcontractor for shafts and tunnels. This scope of work involves five deep shaft structures and three separate microtunnel drives, through the dense boulder infested glacial tills, sand and silts. The tunnel drives are unique in that they consist of combined curves and will involve tunnel drive lengths of greater than 600 m each. Ward and Burke will construct the tunnels using a Herrenknecht AVN1200 TBM and will also be constructing each of the shafts structures, which will consist of circular interlocked secant piles and conventional caissons. The shaft range from 4 m ID to 5 m ID and are circular in plan. The anticipate completion date is May 2014.

FOCUS ON the Project
Grennan says that the success of Ward and Burke is due to a number of factors. First is a keeping the focus on doing the job right. “Our No. 1 goal is keep the client happy at all times and doing good work,” he said.

Ward and Burke achieves this goal by relying on a technically led workforce. “All of our owners, directors, project managers and site managers are fully qualified civil engineers. They have graduated from some of the best universities around the world, including Massachusetts Institute of Technology (MIT),” he said. “We currently fund research programs at MIT, University of Western Ontario (UWO), and National University of Ireland Galway (NUIG) that focus on solving field problems.

“Our philosophy is to put our best people closest to the work where they are able to evaluate all the data and risk as it happens, so that they can react before a problem happens. We have also been fortunate to acquire excellent operators, technicians, mechanics and electricians, who are all important to the operation.”

Ward and Burke places significant emphasis on constructing projects safely and surpassing high quality standards, while meeting budget.  Ward and Burke attained ISO certification in 2007, just seven years after the foundation of the company, and a theme of continuous improvement is evident in all daily construction activities. Ward and Burke invests heavily pre-project planning and engineering, and the utilization of state-of-the-art equipment, all of which are cornerstones to each successful project.

While the future is impossible to predict, Grennan sees Ward and Burke in the Canadian market for the long haul. Both he and Robert Ward have permanently moved to Toronto. “I am excited about the Canadian market going forward,” Grennan said. “We are well positioned and we have invested a lot and acquired key people from the area. We are committed to having a base here and look forward to meeting the needs of the area.”