You are at:Home»News»AECOM Appoints Flowers as National Transit Practice Leader 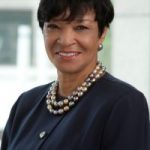 AECOM, a premier, fully integrated global infrastructure firm, announced Jan. 31 that Carolyn Flowers, the former head of the Federal Transit Administration, will lead the firm’s industry leading transit practice in North America. For the past 14 years, AECOM has been nationally ranked No. 1 in the transportation industry by Engineering News-Record magazine.

“I’m tremendously excited about pursuing my career in public transportation on the private sector side of the table,” Flowers commented. “AECOM’s presence in the industry is widely known and respected and I’m looking forward to leading its continuing efforts to provide its transit industry clients with creative, thoughtful and successful solutions to the challenges they face.”

Most recently Flowers served as Acting Administrator in the U.S. Department of Transportation’s (DOT) Federal Transit Administration (FTA). Prior to joining FTA, she served as chief executive officer/director of public transit for the Charlotte Area Transit System, where she was responsible for countywide bus and rail transit planning and management. She began her career in public transportation with the Los Angeles County Metropolitan Transportation Authority (LACMTA) in 1993 and for 19 years served in many capacities in budget, administration and operations at LACMTA, culminating in her appointment as Chief Operations Officer for one of the largest public transit agencies in America.

She has served on a number of professional boards, including co-chairing the American Public Transportation Association’s (APTA) Reauthorization Task Force, and has received a number of awards for her commitment to advancing public transportation nationwide. She also has been active in the Conference of Minority Transportation Officials (COMTO) and the Women’s Transportation Seminar (WTS). Flowers is a graduate of the University of California Los Angeles (B.S. and MBA).