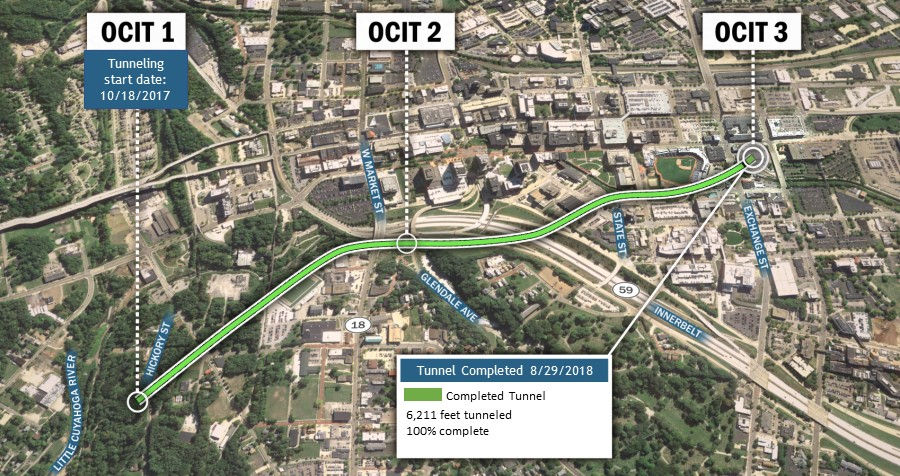 The City of Akron reached a major milestone in the Akron Waterways Renewed! (AWR!) Program when the final sewer connection was made to the Ohio Canal Interceptor Tunnel (OCIT), the largest single public improvement project in the city’s history. This means that 100% of the downtown sewers flow to and through the tunnel, including 9 combined sewer overflow (CSO) structures, for treatment at the Water Reclamation Facility (WRF).

During a typical year’s rainfall, the addition of the tunnel will prevent combined sewage from overflowing into local waterways. The OCIT project is part of the Environmental Protection Agency-mandated Consent Decree, entered in 2014, to improve the City’s sewer infrastructure and WRF and reduce combined sewer overflows and bypasses.

“This achievement is a credit to the dedicated team that has worked tirelessly to reach this point,” said Mayor Dan Horrigan. “We faced some adversity initially from the delayed delivery of the tunnel boring machine. But we pushed through those challenges, and I’m proud to say that despite an ongoing pandemic, we are now on track. This is a truly significant milestone. A fully operational Ohio Canal Interceptor Tunnel will improve the water quality of our local waterways, including the Cuyahoga River, for generations to come.”

The City of Akron will analyze outcomes now that the tunnel and various other projects are completed, and use the data to explore ways to improve the Consent Decree’s environmental impact while minimizing cost to ratepayers. Akron is already implementing a “real time control” system to operate all of the CSO facilities (including the tunnel) in the most efficient manner, with the greatest environmental benefit. This may lead to future improvements to the Consent Decree requirements through the Integrated Planning process.

The OCIT has been under construction since 2016 and “Rosie,” the massive tunnel boring machine, completed boring in August 2018. The tunnel is 6,300 ft long and 27 ft in diameter. The total project is estimated to include 150,000 cubic yards of concrete. To date, more than 800,000 hours of design and construction work have been completed without injury or OSHA incident. The City of Akron ensured that local residents, local contractors and certified businesses were employed to work on the tunnel project. Through December 2019, 29% of the total trade hours have gone to local workforce. Local contractors have accounted for 33% ($65 million) of the contact value. Also, 9.1% ($18 million) of the contract value has utilized certified businesses such as Disadvantaged Business Enterprises (DBE), Minority Owned Business Enterprises (MBE) and Women Owned Business Enterprises (WBE).

Local elements of the tunnel included “Rosie” from Solon, concrete segments from Macedonia, gaskets from Mogadore, shield welding in Youngstown and bearings from Canton. This milestone is a part of the overall AWR! Program which is set to store and provide treatment of approximately 1.1 billion gallons of combined sewer overflow during a typical year of rainfall from entering local waterways, upon completion of all projects.

Beginning in March 2020, portions of the OCIT were put into service, capturing 30 million gallons of combined sewer overflow for full treatment at the Water Reclamation Facility. Throughout April and May, additional portions of the tunnel were sequentially placed into service, allowing for treatment of what would have been combined sewer overflow resulting from the spring rains. As of June 15, 100% of the 9 CSOs in the general downtown area have been connected to the tunnel. This was accomplished two weeks ahead of the revised schedule date.

Akron has also provided additional treatment of 860 million gallons of wet weather flow at the Water Reclamation Facility ahead of schedule. Other Consent Decree projects have been completed 1,440 days ahead of schedule.

For a video on the OCIT project, click here