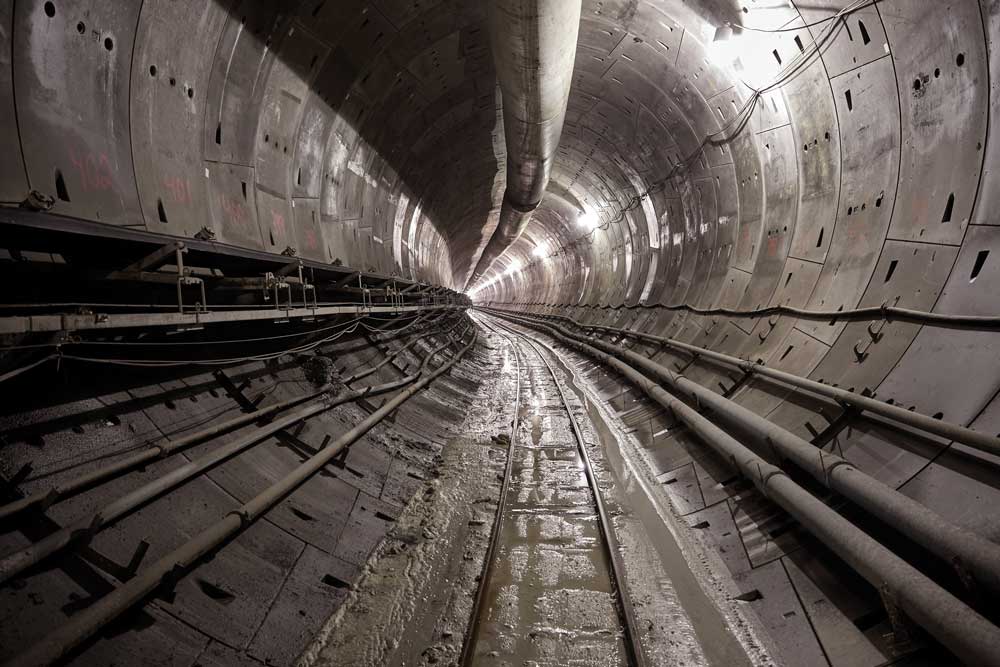 The Cuyahoga River in Northeast Ohio is inextricably linked with the environmental movement in the United States. In was just over 50 years ago – June 22, 1969 – that a fire on Cuyahoga in Cleveland grabbed the attention of the nation and served as a call to action to stop polluting our natural waterways. The creation of the EPA and passage of the Clean Water Act would soon follow, and the national cleanup efforts would begin in earnest.

Fittingly, the City of Akron is in the process of completing its Ohio Canal Interceptor Tunnel (OCIT), an EPA-mandated project that will help further reduce pollution to the Little Cuyahoga River and the Ohio and Erie Canal, as well as the Cuyahoga just downstream. Water quality has improved dramatically compared to 50 years ago, and the new tunnel will continue that trend. The tunnel will store more than 25 million gallons of combined sewer flows and will prevent an estimated 450 million gallons of overflows from entering waterways annually. 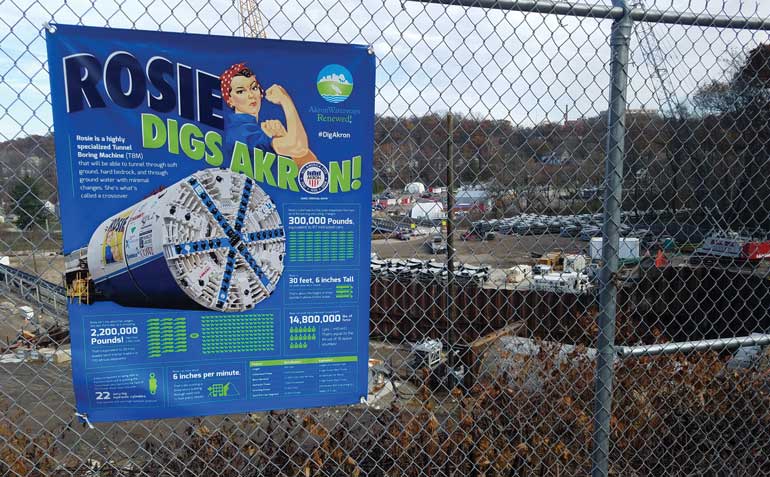 The Robbins Crossover TBM was dubbed “Rosie” in honor of Rosie the Riveter.

Due to successful completion of the tunnel using innovative technology through difficult ground conditions and its environmental benefits, the Ohio Canal Interceptor Tunnel has been named the 2019 Tunnel Achievement Award winner. The Tunnel Achievement Award is presented by the organizers of the Breakthroughs in Tunneling Short Course in conjunction with TBM: Tunnel Business Magazine.

The Ohio Canal Interceptor Tunnel is a part of the city’s $1.4 billion “Akron Waterways Renewed!” program. In 2015, a joint venture of Kenny Construction and Obayashi was awarded the project with a winning bid of $184.1 million. Notice to proceed was issued on Nov. 4, 2015.

The main component of the project is a 27-ft diameter, 6,240-ft long tunnel that begins at a portal adjacent to the Little Cuyahoga River and ends at a shaft downtown near the Akron Rubber Ducks’ minor league baseball stadium. In addition to the conveyance and storage tunnel, the project includes drop shafts, diversion structures, consolidation sewers and related appurtenances.

The alignment crosses three distinct geologic profiles: soft ground, mixed-face and bedrock. To bore the tunnel, Kenny-Obayashi used a Robbins Crossover (XRE) TBM, the first of its kind to be used in the United States. The Crossover TBM includes features of both EPB and single-shield hard-rock TBMs. It was launched from a 40-ft deep portal site and built the first 200-plus ft in soft ground, transitioned to a 600-ft long zone of partial face shale before switching to hard-rock mode for the remainder of the drive in full-face shale.

Due to the difficulty of mining through mixed ground conditions, other tunneling options were considered, including cut-and-cover tunneling for the soft-ground portion, according to David Chastka, project manager for Kenny-Obayashi. However, crossing two railroad tracks and disrupting a neighborhood above the alignment led to the decision to tunnel the entire alignment using the Crossover TBM.

The Crossover TBM cutterhead features larger openings than tradition hard-rock TBMs, according to Elisa Comis, an associate at McMillen Jacobs Associates who led the TBM design as an employee for The Robbins Company.

“We designed the machine with a 27 percent opening ratio for the face, which is low for an EPB but very high for a rock TBM,” Comis said. “We thought that this was good balance to deal with mixed conditions while being able to prevent large pieces of rock from entering the chamber and blocking the screw in rock excavation.”

Additionally, to deal with the long rock drive in the shale, the TBM was equipped with a customized screw conveyor that included wear-resistant plating to avoid potential issues related to abrasion or clogging while tunneling in rock. The screw conveyor is a shaft-type design, 64.5 ft long, 47 in. in diameter, with a tapered front nose to 30 in. In consideration for the OCIT geology and the necessity to muck out shale bedrock, the single shaft-type screw conveyor required a much higher speed than would normally be provided.

Despite their best efforts, the team experienced clogging of the machine in the mixed ground reach. Adjustments were made to the cutterhead, including removing grizzly bars to open more of the face and changing to carbide tip cutters at the periphery of the machine (10 of a total of 56 cutters) to help the cutters gain traction in soft ground.

Adjustments were made in foam generation and soil conditioning formulas to improve advance rates as well. Eventually, the project team honed in on the soil conditioning formula – just in time to begin the transition to rock. The project team even enlisted the help of BASF’s underground division – based in nearby Cleveland – to help identify foaming parameters to mitigate clogging.

“The biggest challenge we had on this job was that we had a short amount of time to figure it out,” Chastka said. “This was the first TBM tunnel in Akron, so we had workers who were new to tunneling, we had a machine we had never used before, we were dealing with constantly changing geology, and we launched right into the most challenging portion of the job. By the time we got through the learning curve, most the difficult ground was behind us. Once we got into the shale, it was smooth sailing.”

Behind the Crossover TBM was a Robbins Continuous Conveyor system for muck removal. The side-mounted conveyor is noteworthy in that it is Robbins’ 100th continuous conveyor. The system consisted of a main drive, splice stand, storage unit and advancing tailpiece, operating through several curves requiring patented self-adjusting curve idlers that adjust belt tension based on the belt load. The system discharged onto a customer-supplied overland conveyor, which delivered the muck to a large storage yard near the portal site. 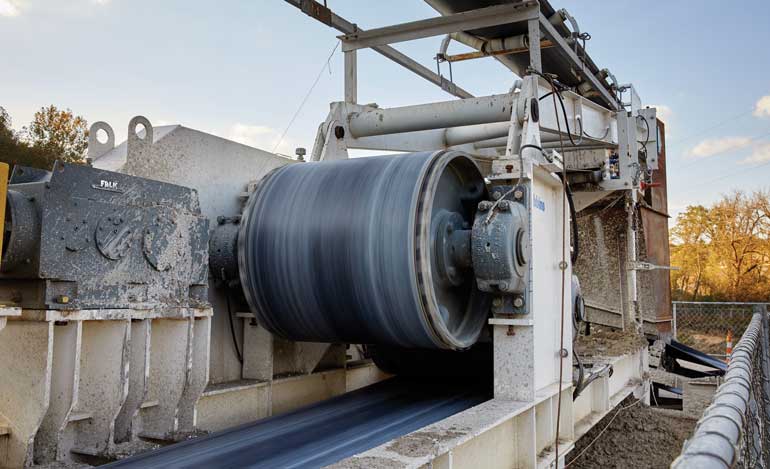 Behind the Crossover TBM was a Robbins’ 100th Continuous Conveyor system for muck removal. (Photo: Robbins)

One of the unique aspects of the Ohio Canal Interceptor Tunnel was the requirement to use the local workforce. The city had a 35 percent resident hiring requirement, as well as requirements for local disadvantaged business enterprises.

Coincidently, the TBM was assembled in Robbins’ Solon, Ohio, shop; part of the shield was made in Youngstown, Ohio; and the fiber reinforced segments were cast at CSI’s facility in Macedonia, Ohio.

Not only were project team members local, but the residents themselves took the project to heart. Open house events and town hall meetings were well attended. “We had a public event when the machine was fully assembled and ready to launch, and we probably had more than 1,000 people come to take a look at the machine,” Chastka said. “It was a unique experience to see people positively engaged about the project.”

The machine launched Oct. 18, 2017, and completed its drive Aug. 29, 2018, with a public breakthrough ceremony that included Akron Mayor Dan Horrigan. “The Ohio Canal Interceptor Tunnel is the largest public improvement project in our city’s history and a significant investment in our environment and infrastructure that will benefit Akron residents and businesses for generations to come,” Horrigan said. “I am incredibly proud that the tunneling portion was completed without any major injuries, thanks to a dedicated team of professionals.” 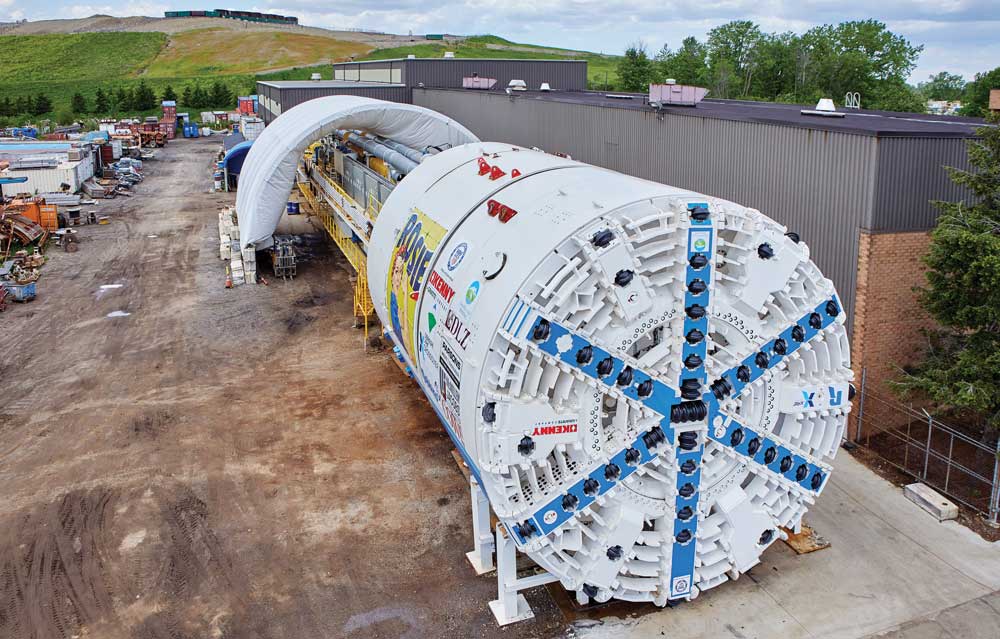 What’s in a Name?

The Robbins Crossover TBM was dubbed “Rosie” in honor of Rosie the Riveter, an icon representing the American women who worked in factories and shipyards during World War II. Hundreds of “Rosies,” including Akron resident Rose May Jacob, worked in factories to turn out materials and armaments for the Allied war effort.