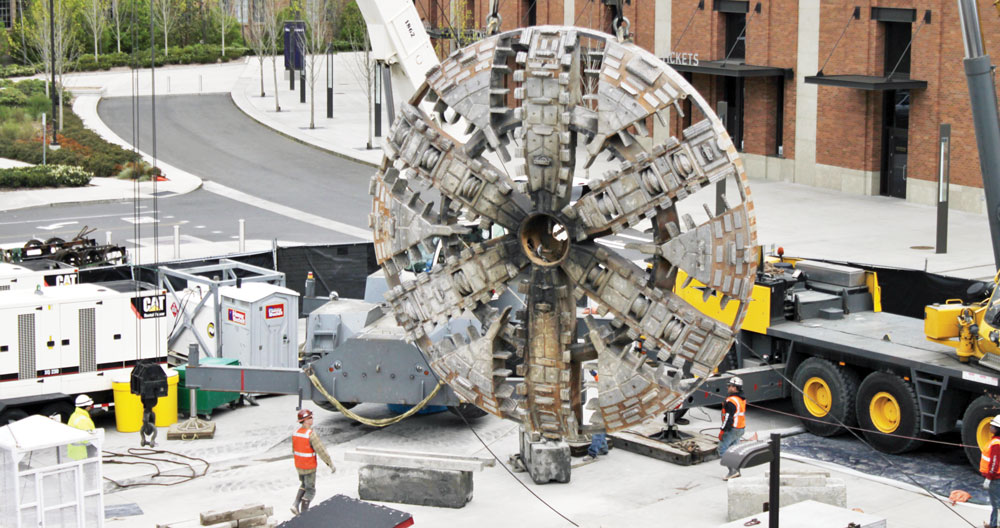 Since it was established in 1996, Sound Transit – the regional transportation agency for the Seattle and Central Puget Sound area – has been steadily meeting the demands of residents in need of commuting options. With Seattle routinely ranked among the most congested cities in the United States, residents are welcoming new mass transit options with open arms. Seattle has seen steady growth in transit ridership, and residents approved additional funding in 2016 to provide further build out of the network.

A large part of the mass transit solution is an expanding Link light rail network, which currently includes a connection two miles south of SeaTac Airport to downtown and northward to the University of Washington. Recently, Sound Transit completed tunneling on a further extension to the north – Northgate Link Extension – that is scheduled for revenue service in 2021. 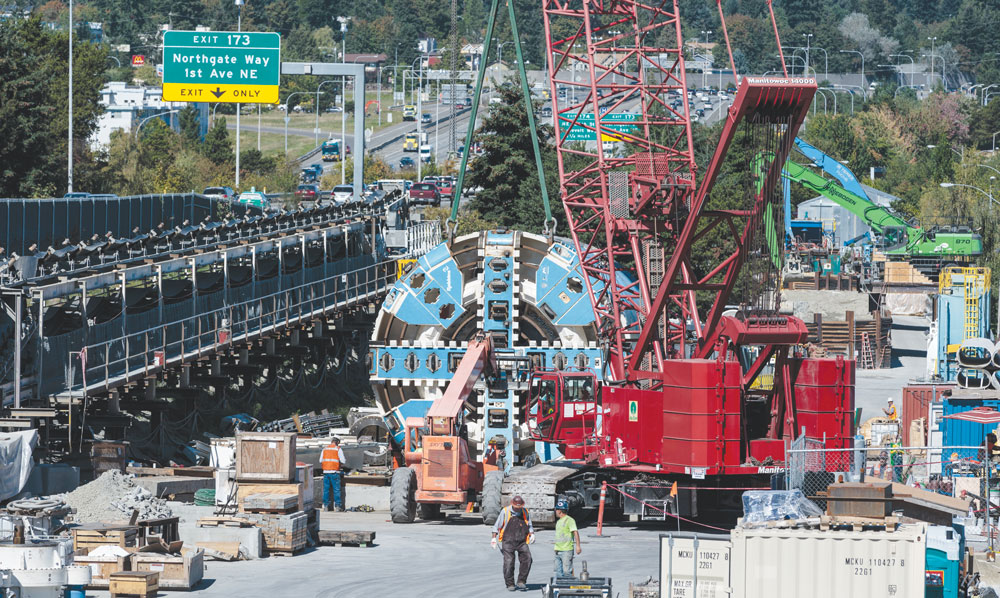 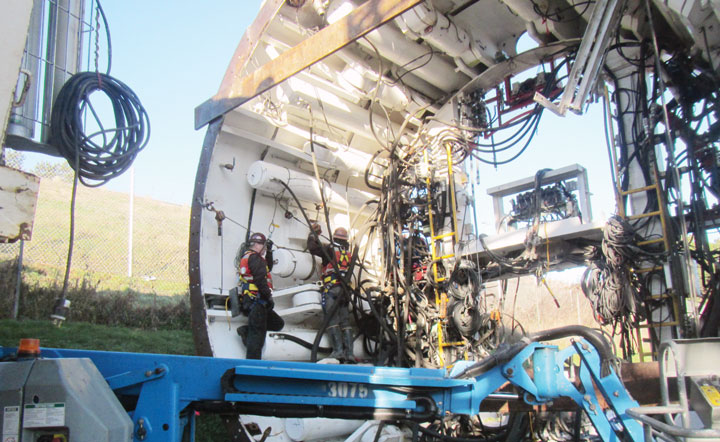 For Northgate Link, JCM used a Hitachi Zosen TBM, which it had used on the U-230 project, in addition to a refurbished Robbins EPB, which had been previously used on a project in Singapore. Tunneling was completed Sept. 1, 2016, with the second hole-through at the University of Washington Station.

In addition to the main running tunnels, JCM’s contract included construction of 23 cross passages between tunnels that will serve as emergency evacuation routes and will contain controls for electrical and mechanical systems. Remaining work under separate contracts includes installation of track beds, rails and communications systems, and fit out of the stations.

About 3,800 ft of the tunnel alignment traverses under the University of Washington, which created a unique set of challenges for tunnel construction. The school is renowned as a leading research institution, and had strict limitations for noise and vibration – during construction and operation – to ensure that its facilities were not impacted. To further reduce impacts on the university, an agreement was reached to limit the construction duration for tunneling under campus.

“We had 304 days to build the tunnels from the time the TBM first crossed under campus,” said Rick Capka, Deputy Project Director – Northgate Link. “That entailed completing two tunneling passes as well as extracting, refurbishing and relaunching the TBM. I am happy to say that we were able to meet that milestone with room to spare.”

Tunneling under campus also required innovation from the design side. “The tunnels under the University of Washington campus provided a series of design and construction challenges,” said Gregg Davidson of McMillen Jacobs Associates, Sound Transit’s design consultant. “These ranged from analysis, design and testing of a floating track slab in the tunnel under the noise and vibration sensitive campus buildings, to schedule constraints on how long the TBMs could actually work within the campus boundaries.” 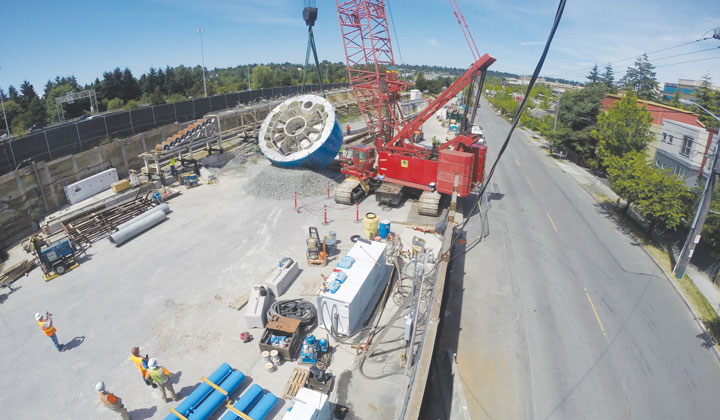 To the north, the alignment crosses a densely populated and growing residential area, so the decision was made to keep the tracks underground. “Tunneling was the best option in that area due to minimizing construction impacts on residents as well as minimizing property acquisition in such a densely packed area,” said Kimberly Reason, Senior Public Information Officer for Sound Transit.

Like many projects in the Seattle area, the ground conditions posed challenges. Typical reaches for Northgate Link include glacial soils comprising sands, silts, gravels, clays and scattered boulders under the water table. In addition, crews had to navigate a section of hard glacial till. To tackle the ground conditions, earth pressure balance (EPB) TBMs were selected. Unlike the U-Link project, Sound Transit allowed the use of refurbished machines, in part due to the availability of used machines in that size range. 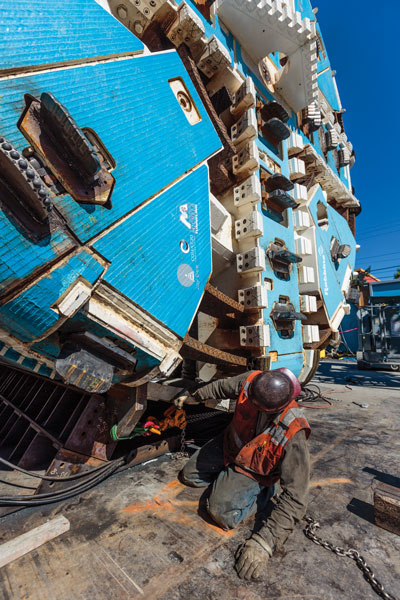 “We found ground freezing to work well in every instance we used it,” Capka said. “We had concerns over the freeze-thaw effects, including the potential for heave or damage nearby utilities or the tunnel itself, so we implemented additional monitoring. In our case, we did not experience any significant issues.” 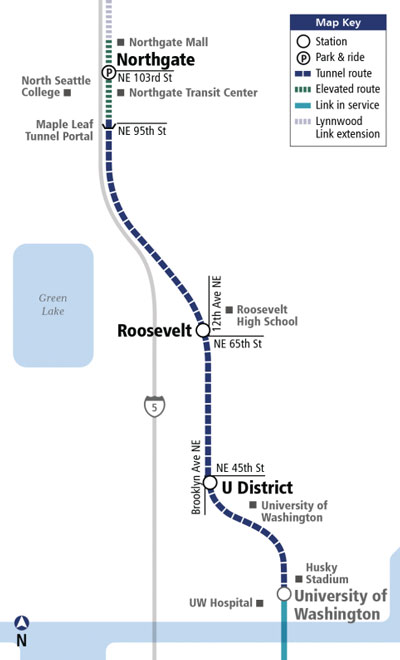 The Northgate Link Extension is approximately 65% complete and is on track to open in 2021. Tunneling was completed in 2016 and all construction on the N-125 contract has been completed, moving Sound Transit one step closer to providing better service to residents.

“The highlight of the project has been the successful collaboration, once again, between Sound Transit, the final design team, the tunnel contractor and the construction management folks, which has resulted in Northgate Link Extension staying on target to open on schedule,” Davidson said. “Following on from the successful U-Link project it’s been great to see the continuing expansion of rail transitoptions in the region.”

“Overall the tunneling went well,” Capka said. “When we were developing the design together with McMillen Jacobs Associates, we said we targeted a tunnel contract start in 2013 and finish in February 2018. With all the complex conditions we faced with tunneling and some of the unanticipated challenges that came up, we finished in February 2018. Keeping to that schedule is crucial in allowing our follow-on contractors to start their work and make Northgate Link Extension a reality.”

The next phase of Link light rail expansion is the Lynnwood Link Extension that will extend the line from the Northgate Link terminus 8.5 miles northward to Lynnwood City Center. Construction is anticipated to begin in mid-2019 with revenue service targeted for 2024.

Next Phase of Tunneling

Sound Transit is soliciting public input and considering alternatives for these extensions. The board will decide the preferred alternative and other alternatives to advance to environmental review in April 2019.

On Nov. 8, 2016, voters approved Sound Transit 3 (ST3), a ballot measure that provides $54 billion in funding to expand and improve transportation in the Seattle area. ST3 will add 62 miles of light rail, completing a 116-mile regional system.

“Our region has embraced a generational opportunity to move forward with a transit network to connect millions of people across three counties,” said Sound Transit Board Chair and King County Executive Dow Constantine. “After decades of waiting, we are ready to start building a light rail system that will grow our economy, improve our quality of life, and ensure access to jobs, education and all the Central Puget Sound has to offer.”

By 2021, Sound Transit will complete light rail to Roosevelt and Northgate Link and in 2023 trains will reach Mercer Island, Bellevue, Overlake, Shoreline, Mountlake Terrace and Lynnwood. From there, Sound Transit will keep building until the agency has completed a 116-mile regional system. Next up will be getting light rail to Federal Way, downtown Redmond, Tacoma, West Seattle, Ballard, Everett, South Kirkland and Issaquah. 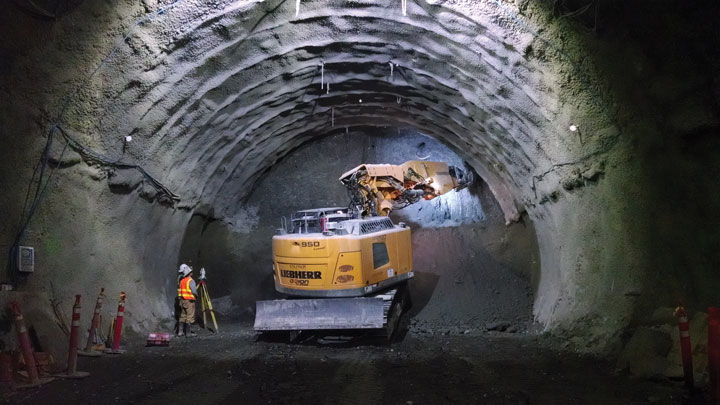 The $3.7 billion East Link Extension is a 14-mile, 10-station extension from the International District/Chinatown station south of downtown to Redmond. The segment is mostly above ground, except for a short tunnel below downtown Bellevue.

Guy F. Atkinson Construction was awarded a $121.4 million contract to build the 1,985-lf, 34-ft ID ovaloid, 12- to 48-ft deep SEM tunnel. The project includes one maintenance shaft 17-ft diameter by 50-ft deep located near the midpoint of the tunnel, a connecting adit to enlarged tunnel section for permanent ventilation fans, and 250 lf of cut-and-cover structure.

Crews are excavating soft ground consisting of glacial till and outwash gravel, using the sequential excavation method (SEM) including full top heading (three headings) as well as single side drift (6 headings).
NTP was issued Feb. 8, 2016, with substantial completion projected by May 20, 2020. As of May, the job was over 80% complete.

Crews are utilizing two Liebherr 950 to excavate the tunnel, and Normet Spraymec 8100 shotcrete robot to place the shotcrete lining.