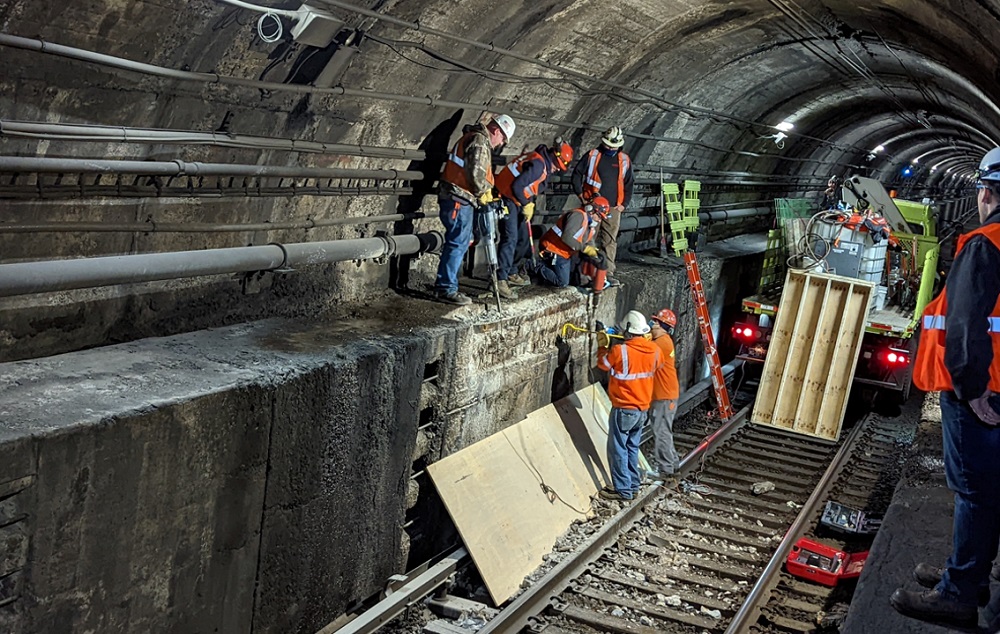 Amtrak personnel recently spent a series of consecutive weekends in March remediating damage to the benchwall system in the South Tube of the North River Tunnel that maximized efficiency without interrupting regular train service. The crews were able to take advantage of previously scheduled work that required weekend service outages to replace critical switches near New York Penn Station.

“The Federal Railroad Administration is proud of our investments to improve the reliability of the North River Tunnel, knowing its safety and dependability is a necessity for the many Americans traveling the Northeast Corridor,” FRA Deputy Administrator Jennifer Mitchell said. “FRA is committed to working with our modal partners within the Department of Transportation and with Amtrak and other stakeholders to advance long-term rail infrastructure needs in the region.”

“These interim improvements are critical to ensuring the continued safety and reliability of the North River Tunnel and improving our customers’ travel experience in and out of New York City with minimal inconvenience,” said Laura Mason, EVP of Capital Delivery. “With such limited windows to perform maintenance without reducing service, we must take advantage of every opportunity to do so when we can and due to the great work of our employees, we were able to act.”

Over the course of a 55-hour weekend outage, when more invasive work could be performed without impacting service, crews jackhammered away loose and unstable concrete from the walking surface, poured and set fresh concrete, and retrofit a below-surface splicing chamber into which crews must climb to repair damaged sections of the 12,000-volt feeder cables that run through the tunnel’s benchwalls.

Workers have also been injecting grout into the tunnel’s concrete liner to redirect infiltrating ground water and minimize the frequency of infrastructure failures like signal problems and poor track conditions. In 2021, crews took advantage of at least two 55-hour weekend outages when tracks were removed to clean the drain system beneath the trackbed.

The work is part of an approximate $150 million investment in a series of interim improvements that Amtrak is making in the more than a century-old tunnel while construction of a new Hudson River Tunnel advances as part of the Gateway Program. The program does not negate the need for an eventual closure of the tubes for comprehensive rehabilitation once a new tunnel is built.

The North River Tunnel Interim Reliability Improvement program is a series of work packages that can be undertaken during existing maintenance windows to target the most problematic sources of train delays and infrastructure failures. Future phases of work involve digital scanning of the trackbed and enhanced asset monitoring, which will allow crews to respond more quickly and strategically when problems arise.