You are at:Home»News»Amtrak, MDOT Announce New Approach for Baltimore and Potomac Tunnel Replacement 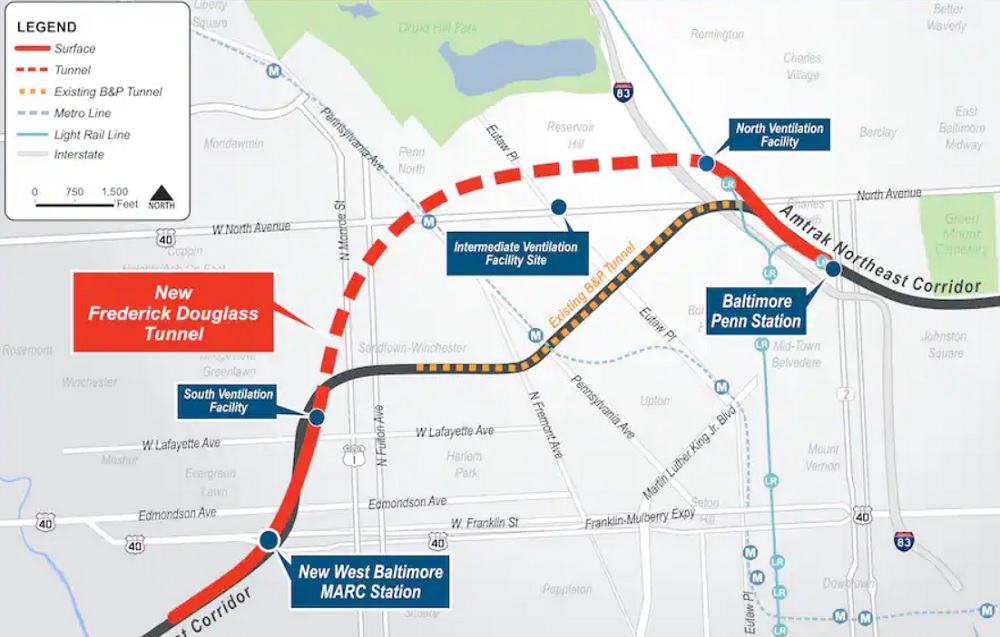 On June 18, Amtrak and the Maryland Department of Transportation released new plans to replace the 148-year-old Baltimore & Potomac (B&P) Tunnel on the Northeast Corridor in the next 10 years at a cost of $4 billion.

Additionally, Amtrak announced the new tunnel will be named after Frederick Douglass, the late Maryland-born and world-renowned abolitionist leader.

“In naming this vital piece of new infrastructure on the Northeast Corridor, we want to highlight Frederick Douglass as a critically important figure in American and Maryland history, whose principles and work inspire Amtrak and align with our own values and mission,” said Amtrak president Stephen Gardner. “As Frederick Douglass escaped to freedom by way of a train in Baltimore and traveled extensively by rail, naming this state-of-the-art new passenger rail tunnel after him is a fitting way for us to honor his legacy.”

“It is a tremendous honor to have the future tunnel named for Frederick Douglass,” said Nettie Washington Douglass, a great-great granddaughter of Douglass. “Baltimore was where the first seeds of freedom were sewn for my great-great grandfather.”

“Built just after the Civil War, the B&P Tunnel is reaching the end of its useful life,” said U.S. Department of Transportation Deputy Secretary, Polly Trottenberg. “This project will modernize a critical part of the Northeast Corridor making the train work better for the 9 million passengers that depend on it each year. It’s a great example of what we can accomplish more of with the American Jobs Plan.”

All MARC Penn Line and Amtrak trains will use the new Frederick Douglass Tunnel. MDOT and Amtrak have agreed on a phased implementation approach, where the initial implementation will include two new high-capacity tunnel tubes for electrified passenger trains but defer the construction of two additional tunnel tubes that could be designed to accommodate freight trains in the future. To enable this new plan, Gregory Slater, Maryland Secretary of Transportation, announced that MDOT will electrify its MARC commuter trains through the new Frederick Douglass Tunnel.

“This is a generational project for passenger rail in the State of Maryland and the entire Northeast Corridor,” said Gregory Slater, Maryland Secretary of Transportation. “MDOT is proud to partner with Amtrak on the new approach, and we are ready to work with Amtrak and the federal government to move a new B&P Tunnel forward.”

A key benefit of the new approach is that it will eliminate diesel train emissions at a ventilation facility on North Avenue in West Baltimore. The changes will also save two years during construction and more than $1 billion.

“Replacing the B&P Tunnel is an important endeavor that will result in faster, more reliable rail service for passengers up and down our country’s busiest rail corridor. It will also be a key investment for Baltimore City. But it will take resources, a long-term commitment, and partnership among all of us at the federal, state and municipal level,” said Senator Cardin, Chair of the Senate Subcommittee on Transportation and Infrastructure.

“Today, we celebrate and reflect on the history and the legacy of the Baltimore and Potomac Tunnel – which has served our communities for generations and continues to serve 9 million Americans annually,” said Senator Van Hollen. “In celebrating the B&P Tunnel’s long history, we also celebrate the success of Amtrak and MARC as well as the determination, spirit, and grit of our Amtrak and MARC employees – who have stood strong even through the challenges of the last year. It is that determination that will help build the new Frederick Douglass Tunnel that will last for years to come. I’ll continue to fight for funds to ensure these transit and rail systems are able to serve Marylanders.”

“The new B&P Tunnel is designed to be both a transportation marvel and an environmental model for many more years to come,” said Congressman Kweisi Mfume. “I am glad we were able to create this victory for Maryland and the nation.”

“After serving as a critical connector for our regional rail network for 150 years, it’s time to bring the B&P tunnel into the 21st century,” said Congressman Brown. “As Congress continues its work on transformational investments in our nation’s infrastructure, I worked hard to secure funding for B&P tunnel modernization which is essential to growing our economy, tackling climate change and reducing congestion. This project is critical to keeping our state moving.”

“Critical infrastructure investments – like the one we’re announcing today to advance the B&P Tunnel Replacement Program here in Baltimore – will help increase economic growth and job creation across our region,” said Congressman Sarbanes. “As we celebrate the 150th anniversary of the B&P Tunnel’s initial groundbreaking, we must redouble our efforts to expand Maryland’s economic hubs and transit systems.”

“Baltimore is excited for the potential of the B&P Tunnel Replacement Program—not only for the jobs it can create during construction, but also for the new West Baltimore MARC Station and enhanced MARC service,” said Baltimore Mayor Scott. “Making the needed investments to improve the accessibility and usability of the MARC transportation system for our residents is the key to a safer, stronger, more vibrant Baltimore.”

The B&P Tunnel Replacement Program is a broad range of investments that will transform a four-mile section of the Northeast Corridor in Baltimore. It includes the new Frederick Douglass Tunnel, a new ADA-accessible West Baltimore MARC Station, and the replacement of bridges, track, and rail systems. Amtrak is currently performing final design and initiating property acquisitions to prepare for construction. Pending sufficient funding for the approximately $4 billion investment, early construction activities on the tunnel’s southern approach could begin over the next one to two years.