You are at:Home»Featured Stories»Anchoring on Austria’s New Semmering Base Tunnel 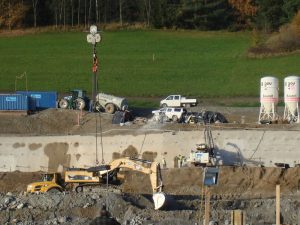 The Graz-based Baubeteiligungsgesellschaft m.b.H.is excavating and stabilizing the slope with shotcrete and permanent self-drilling anchors from Minova MAI.

In April 2012, work started on the New Semmering Base Tunnel, one of the most ambitious construction projects being completed by Austria’s ÖBB-Infrastruktur AG. Scheduled for completion in 2024, the 27.3-km (17-mile) tunnel through the Semmering range will cut the journey time on the South railway connecting Lower Austria and Styria. Before construction can begin at the entrance portal and tunnel bores, the work concentrates on the aboveground sections with the clearance and excavation of the entrance ramp site. The slope is currently being excavated by the Baubeteiligungsgesellschaft m.b.H. BBG-GRAZ. The cut face is shored with shotcrete and permanent self-drilling anchors produced by Minova MAI, a well-suited and economical bolting solution for softer rock formations. After completing the surface construction work, the twin-bore, single-track tunnel will be cut through the Semmering by conventional and continuous excavation beginning in 2015.

Once completed, the New Semmering Base Tunnel will be one of the longest rail tunnels in Austria. It will act as a vital link on the route crossing Europe’s heartland from Northern Germany to Italy, which currently has to climb the steep Semmering pass between Gloggnitz and Mürzzuschlag on a historic mountain railway recognized as one of the UNESCO World Heritage sites. The old route imposes considerable limitations on heavy freight transport, and passenger trains have to slow down to a speed of around 50 kph (31 mph). The New Semmering Base Tunnel will bypass this bottleneck and cut 30 minutes off the journey time between Vienna and Graz. It represents a particular advantage for freight traffic, since the new route’s minimal incline of 8.4 percent removes all obstacles for even heavy freight trains.

Construction on the new route started in early 2012 with preliminary work on securing the entrance slopes in the Gloggnitz section by the Baubeteiligungsgesellschaft BBG-GRAZ. For shoring the cut face, BBG-GRAZ relies on permanent self-drilling anchors supplied by Minova MAI GmbH. “We have worked with Minova a number of times already, and we are very satisfied with the excellent advice and the flexibility that Minova has given us,” Managing Director of BBG-Graz, Franz Schweighofer, said. The excavation of the precut proceeds in the so-called pilgrim steps process, in which cuts of a horizontal length of 6 to 10 m and height of 2 m are made with blocks of soil of similar dimensions remaining in place between each cut. The cuts are then secured with shotcrete and self-drilling anchors before moving to the next sequence. The CE-certified permanent self-drilling anchors provided by Minova MAI are a particularly effective means for such bolting in soft or sandy rock formations.

For more efficient anchoring, BBG-GRAZ relies on a semi-mechanized setting process that uses an integrated rotary injection adaptor (IRIA). In this method, the hollow-rod anchors with lost (sacrificial) drill bit act as their own drill. Depending on the ground conditions, a cementitious grout or resin is pneumatically injected into the rod during drilling. Once the planned depth has been reached, a specialized anchoring grout is fed through the rod, which hardens to a concrete strength sufficient to bear the intended loads. A selection of drill bits is available to match the geological properties at the destination: the varied geology of the Gloggnitz site meant that the entire drill bit range provided by Minova MAI is being used. With a precut of approximately 500 m in length and a cut height of approximately 10 m, the site uses around 1,600 permanent self-drilling anchors at lengths of 8 to 12 m, arrayed in a 1.5 x 1.5 m grid. The new slope’s surface is covered by 5,000 m2 of shotcrete.

The New Semmering Base Tunnel will hold two parallel shafts, each measuring 10 m in diameter. The twin bores will be spaced at a distance of 40 to 70 m from each other and connected by cross-passages every 500 m to act as escape routes in the event of emergency. The geological challenges of the chosen tunnel route mean that the tunneling work commencing in 2015 will rely on two means of drivage: conventional tunneling by excavation and blasting according to the New Austrian Tunneling Method (NATM), and continuous excavation with tunnel boring machines (TBM). Almost 28 km of tunnel will be cut for the New Semmering Base Tunnel, proceeding in multiple sections from both ends of the route until the two shafts meet far beneath the Semmering.

Powering on Through the Alps

The current plans envision the tunneling work to be finished and the shafts ready by 2020. Once fully furnished and equipped, passenger and freight trains can begin to pass the New Semmering Base Tunnel at speeds of up to 230 kph (140 mph) at the end of 2024.