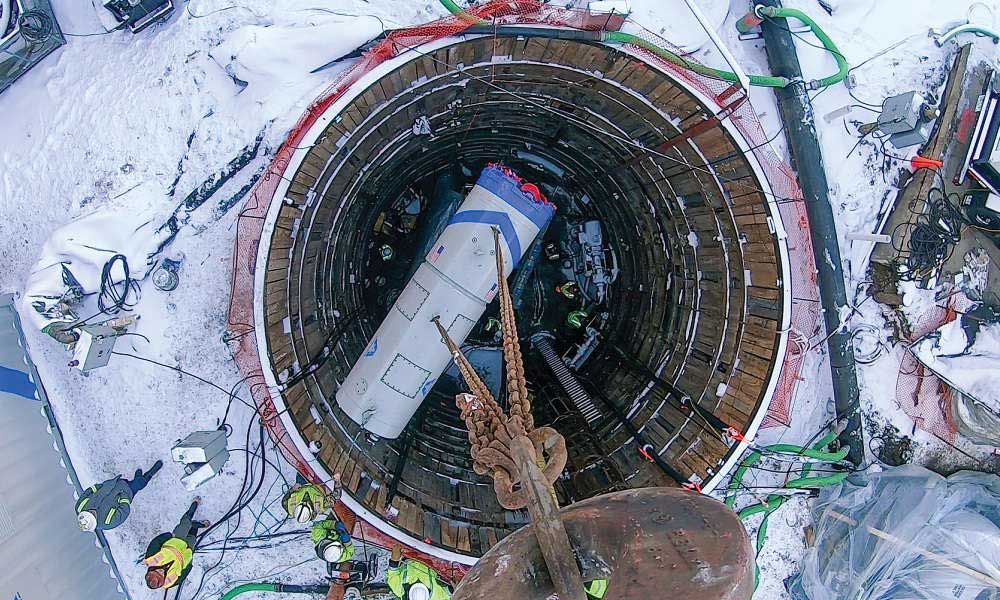 Rochester, Minnesota, is experiencing a significant economic development initiative to position itself as a global destination for health and wellness. The $5 billion Destination Medical Center (DMC) initiative began in 2014 and is being implemented over the next 20 years. With the growth comes a myriad of need for infrastructure expansion and capacity increases.

The project region is divided into six sub-districts. The Downtown Waterfront Sub-District includes the Mayo Civic Center, the Rochester Public Library, and the Rochester-Olmsted Government Center; the Zumbro River connects all these facilities. They are positioned just one block east of Broadway Avenue, which is the main thoroughfare to downtown and the renowned Mayo Clinic.

As part of the DMC project, the Rochester Public Works Department needed to improve a sanitary sewer along 1st Avenue SE to 2nd Street SE, the storm sewer along 2nd Street SE to 3rd Avenue SE, as well as a new siphon located from the 3rd Avenue SE Bridge from the Rochester-Olmsted Government Center to 2nd Street. The packaged result was the 1st Avenue SE Relief Sewer for the Government Siphon J7825 project design. Construction began in May 2019 and is anticipated for completion in July 2020.

The project award went to prime contractor Lametti & Sons Inc. of Hugo, Minnesota, which was established in 1953. Lametti has been using tunnel boring machines, excavator boring shields and pilot tube guided boring equipment for trenchless installations for many decades. Their service offerings range from sanitary, storm and water pipelines through trenchless new installation and rehabilitation services.

One of the critical pieces of this project was a 393-If, 36-in. ID tunnel that runs northeast just feet from the side entrance to the Rochester-Olmsted Government Center, continuing under the Zumbro River to emerge to the siphon connection on the east side, across the street from the Rochester Public Library. The siphon casing was filled with two 8-in. and one 10-in. HDPE siphon carrier pipes and then encased in cellular concrete.

Matt Crawford, P.E., Project Development Manager for the City of Rochester Public Works Department, described the need for a trenchless solution for the alignment. “During the design, we found that we had a dropping rock layer being replaced with sandy soils and cobbles and were challenged to find a crossing location that was of a consistent soil type,” he said. 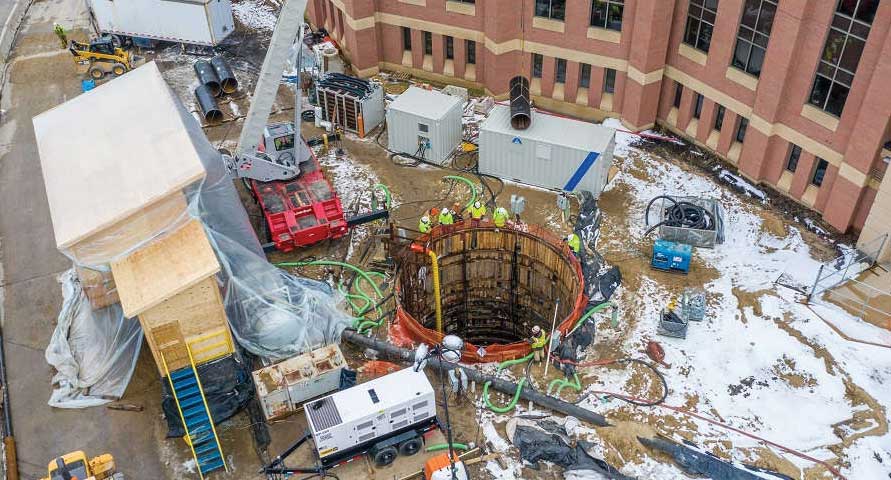 “The flood control walls limited the ability to open-cut the alignment, and the costs would be significantly higher if the flood control walls, bike trails and the river would have had to be modified. There were also space limitations that were considered, and it was determined that microtunneling was the most cost-effective way to proceed.

“One of the biggest challenges for tunnel installation was groundwater control. We had sandy soils and fractured limestone that allowed the river and groundwater to move quickly.”

While not very long, the tunnel design was complex and ran the gamut of varying ground conditions – from flowing soil in a high-water table to rock. The final 15 If of the run required the MTBM to emerge into the reception shaft from a full-face of sandstone and dolostone up to one-third of the size of the internal diameter of the pipe and 30,000 psi compressive strength.

Several trenchless civil construction services are in their wheelhouse, but up to this point, Lametti & Sons Inc. had never undertaken a microtunneling project. But, where there is a will, there is a way, and it’s especially convenient if their preferred trenchless equipment manufacturer, Brownsdale, Minnesota-based Akkerman Inc., is a mere 40 minutes away from the project site. Akkerman leased them an MTBM system and provided field technicians to train their crew.

Lametti crews mobilized to Rochester in May 2019 and began on open-cut storm and sanitary sewer construction. Microtunneling was scheduled to begin in August 2019. However, an exceedingly wet fall led to project delays, which pushed the launch out until the week between Christmas and New Year’s Day.

The delay meant mining in January, which is usually the coldest month of the year in Minnesota. Provisions had to be made to keep the slurry lines warm for slurry movement, and a wooden enclosure was erected around the slurry separation plant.

Lametti Superintendent Nick Cherveny commented. “Excavating 20 ft below river elevation is a special kind of feat, especially when it’s completed in the middle of a Minnesota winter, but we were committed to a quality installation which would meet the project deadline.”

The SL38 system was delivered, and on Dec. 31, the MTBM was launched from a 40-ft deep shaft on the east side of the Government Center. The control container, remote hydraulic power pack for auxiliary functions, a job trailer, pipe staging area, excavator, and slurry separation plant were all nestled in the narrow region between the Government Center and 3rd Avenue Bridge.

The SL38 MTBM, although small in diameter, boasts a 75-hp water-cooled electric motor with VFD, equipped with a mixed-ground disc cutterhead rated at 61 tons for a full face, and capable of 54,000 ft-lbs of cutterhead torque and 91,000-lbs of steering load per cylinder (35,000-lbs dictated by disc cutter load limit). The MTBM system was remotely controlled by the operator in Akkerman’s newest control container providing 250 hp, 575 V cutterhead drive VFD and three 100-hp, 480 V pump VFDs for slurrymovement.

“The project required a lot of planning and labor,” said Cherveny. “Most of what we did was within moving water, so keeping things from freezing created a very complex situation.”

Once mining was underway, installation of the 36-in. Permalok steel pipe moved along swiftly. At the 100-ft mark, the MTBM was under the river. At around 170 lf, the MTBM started to encounter consistent pockets of rock. At 260 If, production was intentionally slowed down to allow for the completion of the reception shaft. At 290 If, the MTBM was encountering a full-face of rocks, including limestone.

At the set of pipe No. 32, evidence of timber coming back through the slurry lines made everyone a bit nervous. The wood was later identified as belonging to an old wooden floodwall that was buried 35 ft below the existing grade.

“Wood fibers have the potential to clog up the intake ports and slurry lines,” explained Cherveny. “It could have stopped the tunneling for an extended period, but the MTBM was able to drill through it without stall.”

After two weeks, on a day featuring negative 10-degree temperatures, the MTBM reached the reception shaft wall at the necessary grade. The Lametti crew expressed pride and satisfaction in their contribution to the DMC initiative.

Cherveny concluded. “The partnership between Akkerman and their innovative microtunneling equipment, combined with Lametti’s underground experience, made this project’s success very gratifying.”

This article was appeared in the Akkerman Inc. April 2020 newsletter.