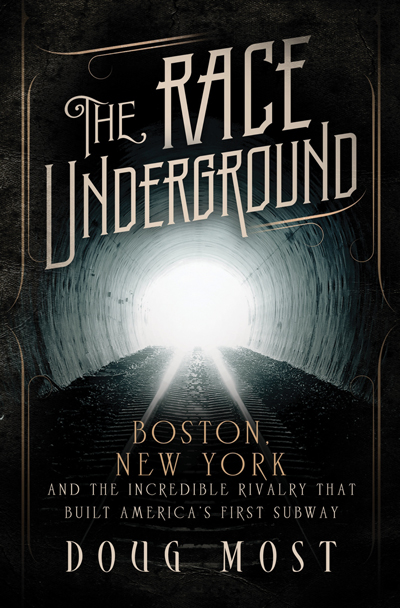 The following is adapted from the book The Race Underground by Doug Most. The book chronicles the race to construct the first subway system in the United States amidst a backdrop of economic upheaval, life-changing innovations, class warfare, bitter political tensions, and the question of America’s place in the world.

ON THE FEBRUARY DAY
in 1900 when August Belmont signed the contract to pay for building New York’s subway system, he had one employee, John Bart McDonald, the contractor who would build it. They made an odd couple, the bald, belly- bulging Irishman who had worked hard labor his whole life and the trim, snobbish, spoiled German Jew born into a life of privilege. They, along with William Barclay Parsons, the young engineer who had the entire route mapped out on his blueprints and knew the formation of the island of New York down to every last pebble, were now being hailed as saviors and protectors of a project that seemed doomed time and time again. And they had 30 days to hire a crew and start digging. They would not have to look far.

The news that New York was about to build a subway spread fast. Two dollars a day for eight hours of work was good money for a laborer. Engineers, axmen, levelers, steelworkers, inspectors, cement mixers, masonry men, accountants, stenographers, diggers, and even messengers were all suddenly needed. At the Municipal Lodging House on First Avenue at 23rd Street, skilled and unskilled laborers from around the country began to flock in day after day in search of a cot to sleep on and a penny to earn. There would be thousands of men within a few days.

A three-room apartment in New York rented for $8 a month, which could be divided among three, four, or as many as six workers to reduce the cost. A dozen eggs was going for 25 cents, about the same for three tins of sardines, while a dozen pints of beer could be had for a dollar fifty. At the saloons, draughts were five cents, whisky shots ten cents. With those basics, a group of immigrant workers could be quite content, as long as they had paychecks to purchase them.
As for McDonald, arrogant as always, he vowed that digging 21 miles of tunnel through the schist of New York would be no more challenging than any other routine job he had handled.
“Constructing the tunnel will be simple,” he boasted. “Just like cellar digging.” 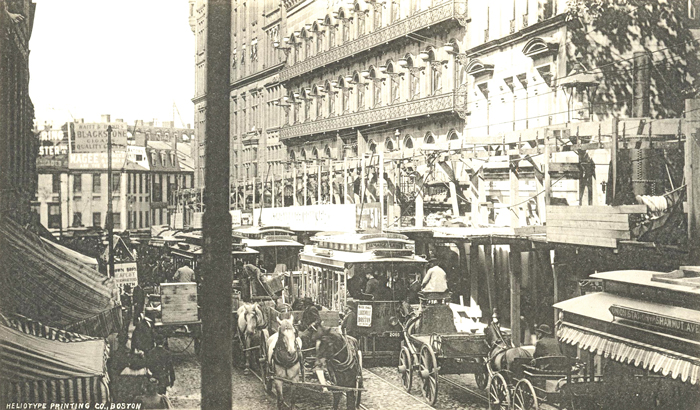 The problem: In Boston’s downtown, shown here, like New York’s, the streets were so crowded in the 1890s travel was impossibly slow. Boston’s subway would open in 1897, the first in America. Credit: Boston Public Library

IN A MATTER OF DAYS
After Parsons’s first swing of a pick-axe downtown to break ground, it looked like bombs had exploded all over the city. Downtown, uptown, midtown— swarms of men wearing baggy pants, heavy boots, brimmed hats, shirts with their long sleeves rolled up, and suspenders emerged with their sharp pickaxes and started swinging. In minutes the streets were reduced to rubble. As one group pushed forward inch by inch, another group behind them shoveled the loose rocks and dirt into wooden carriages attached to mules that carted it away.

They made remarkable progress considering their primitive tools. In weeks, the streets were obliterated and the men were standing 10 or 20 ft deep, often amid a maze of sewer, water, and gas lines that would need to be rerouted or lowered farther into the ground. So nervous were the crews about gas leaks that, instead of working around the pipes, they rerouted them above ground to get them out of harm’s way.

In Columbus Circle, the imposing 70-ft marble statue of Christopher Columbus, erected in 1892 to honor the 400th anniversary of his landing in America, soon stood amid utter destruction, looking out over an intersection in chaos. The street railway tracks circling the monument were littered with debris and passed between piles of dirt or directly over newly dug trenches. Waiting passengers stood feet away from the work, and women with children stopped and stared at the progress. 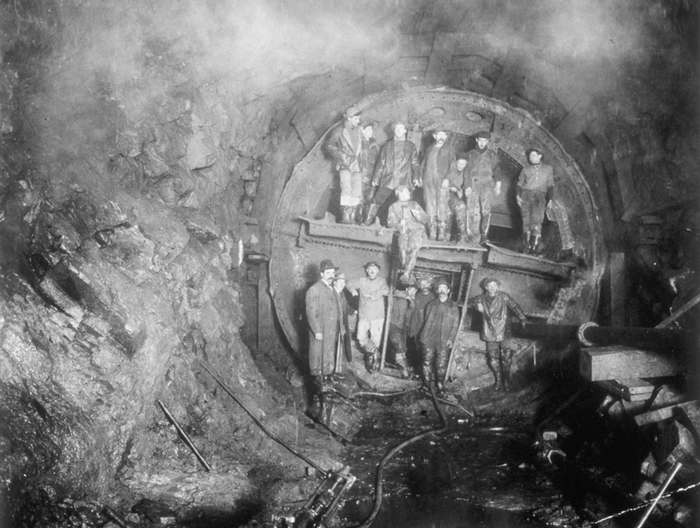 The tunnel: Circa 1902, Workers stand inside the shield that bore through Manhattan’s underbelly to open the New York subway in 1904. Credit: New York Transit Museum

The deeper the workers went, the bigger the rocks that they loosened. And that’s when the machinery was needed. The arm of a steam-powered crane would hang over the trench and drop a rope down, waiting for it to be tied to a boulder before hoisting it to the surface. Throughout the city, diggers would discover coin chests and colonial weapons, and a crazy collection of underground brooks, springs, and even a small subterranean pond at 32nd and Madison. Giant mastodon bones surfaced near Dyckman Street, and the charred hull of a seventeenth- century Dutch merchant ship was found near the Battery.

Fortunately, they would not, like the workers in Boston who built America’s first subway a few years earlier, stumble upon hundreds of bodies in cemeteries. Once a section of trench was long and deep enough, steel beams were laid in a grid across the top of it to begin the process of building the roof of the tunnel and of rebuilding the surface of the streets.

BECAUSE THE QUESTION OF
how the trains should be powered had been decided, the next critical question Parsons faced was how deep to dig. His choice would affect the way New Yorkers lived and traveled from that day forward. Today, when New Yorkers merely bound down a dozen or two dozen well-lighted steps to most of their stations across New York City, rather than ride elevators much deeper into the dark underground, it’s because Parsons had the foresight in 1900 to make his decision based not on how difficult it might be to build the subway but on how easy and pleasurable it must be to ride the subway day after day, year after year. As with everything he did, Parsons approached the question of how deep to dig practically, thinking like a passenger, and analytically, using the wealth of engineering knowledge he’d accumulated from more than a de cade of drilling holes in the island.

Tunneling the subway meant boring deep through the earth by using giant shields, oversized drills essentially, which pushed forward inch by inch and carved out the path for the trains. But it also required blasting through rock. McDonald could not claim any firsthand experience in underground subway tunneling. Very few contractors around the world could.

However, he did work on the Hoosac Tunnel in Western Massachusetts, a 5-mile long railroad tunnel carved through the 1,700-ft Hoosac Mountain. It was a disastrous job that dragged on for a quarter of a century, claimed nearly 200 lives, and involved dozens of explosions, subterranean floods, and cave-ins. It came to be called “The Bloody Pit.” But it was not a complete wasted effort. On the Hoosac Tunnel, workers used dynamite for the first time to set off controlled explosions, a feat that would come in handy for McDonald.

Of course, it was one thing to blow up dynamite inside a mountain in rural Western Massachusetts. McDonald would be digging his tunnel beneath 4 million people living, working, and riding in streetcars overhead in a city built of steel, iron, wood, and concrete.

Doug Most is the Deputy Managing Editor for new initiatives and special sections for the Boston Globe and can be reached at Dmost68@gmail.com. The material is copyright © 2014 by the author and reprinted by permission of the author and St. Martin’s Press LLC. More information can be found at www.dougmost.com.