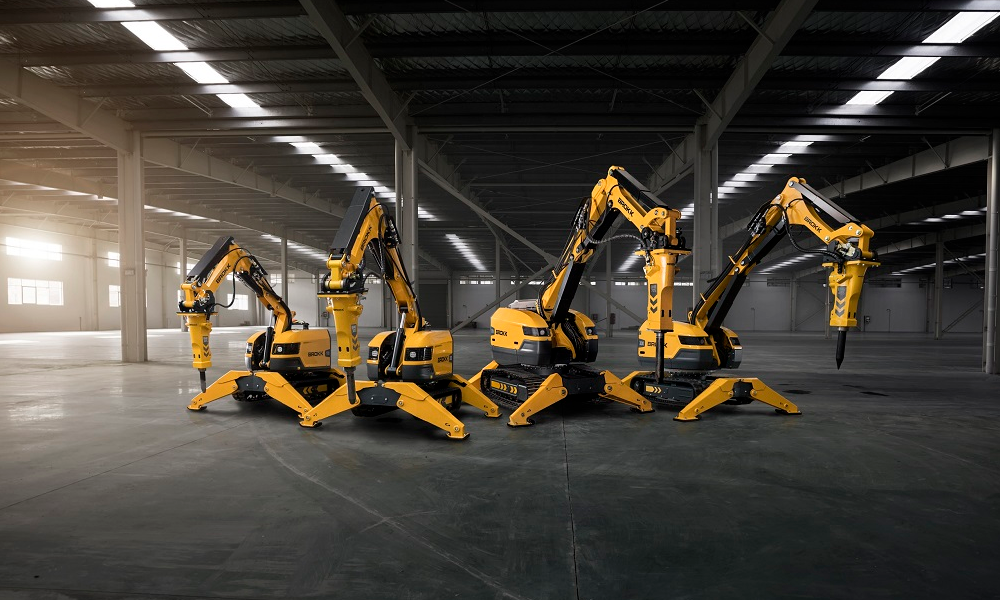 “The introduction of these four demolition machines redefines expectations in terms of power-to-weight performance ratio for demolition robots.” said Martin Krupicka, president and CEO of Brokk Group. “And this is all made possible by the unique new Brokk SmartConcept technology, which boosts an already world-class line up of demolition machines.”

The 3,527-lb Brokk 170 offers 15 percent more breaking power than its predecessor, the Brokk 160, with a 24-kw SmartPower electric powertrain. The machine delivers 299 ft-lbs with each blow of the Brokk BHB 205 hydraulic breaker and maximizes the crushing force of the Darda CC440 crusher, designed specifically for the B170. The new model maintains the same compact dimensions of the Brokk 160, for ultimate flexibility in limited access and confined spaces.

Defining a new weight class for demolition robots, the Brokk 200 fills the gap between the Brokk 170 and the Brokk 300. The new model leverages SmartPower technology to pack the power of a 6,834-lb Brokk 280 into a 4,629-lb package. The 27.5-kw machine operates attachments typical of robots one weight class higher. When paired with the new Brokk BHB 305 breaker, the unit’s hitting power is increased by 40 percent over its predecessor, yet the Brokk 200 retains the same 31-in. width for easy access through standard doorways.

The Brokk 200 offers 15 percent longer vertical and horizontal reach – over 2 ft more than the Brokk 160 – while retaining most of the compact dimensions. The extra chassis length and machine weight ensures proper balance, even when wielding heavy attachments. The Brokk 200 is ideal for heavy-duty, difficult-to-access projects and applications and represents the new gold standard in compact remote-controlled demolition power.

The all-new 8,047-lb Brokk 300 replaces the Brokk 280. Again, because of the unit’s exceptional power-to-weight ratio, it boasts 40 percent more hitting power than its predecessor, when paired with the Brokk BHB 455 breaker. Brokk developed the 300 with the new generation of SmartPower technology, which increased power output to 37-kw. This allows the machine to deliver the hydraulic flow and pressure to fully power heavier and more powerful attachments.

Although the Brokk 300 is slightly longer than the Brokk 280 and 1,102 lbs heavier, it retains the same width and height, making it ideal for confined work sites. A new arm system increases vertical and horizontal reach to 21.3 and 20 ft, respectively.

Each of the four models includes Brokk’s signature technology, SmartConcept, which maximizes the capabilities of the versatile machines with the power management features of SmartPower, the added reliability and user-friendliness of SmartDesign, and the enhanced ergonomics and productivity of SmartRemote.

These four new demolition robots from Brokk reflect the company’s constant focus on innovation, improved performance and increased uptime for customers around the world. Each of the new machines combines state-of-the-art technology, significant improvements in power-to-weight ratios and rugged reliability. Brokk will begin shipping the new models in August/September 2018.